Couple of years ago now, Matthew Adams, who I think is still around in places (Hello Matthew!) had the rules for a lego-based racing game he was working on and asked me for background and extra stuff.

I did a bit of development on it, but I don't think it ended up going anywhere, so here you are. I will blog what I have for a few days.

Without rules or context it reads like some kind of surreal car race/art project.

[EDIT - Check the comments for Matthew. The rules for the game are here.] 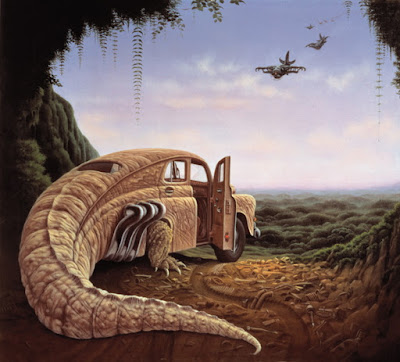 This is not a game about getting it right, it is about doing it now. Now is always better than right.

Things went wrong in Rumble City.  But now they’re ok. Because everyone drives really fast. In cars they made themselves. If you never stop then nothing will go wrong again.

Whatever smashed reality back in the day left things crazy and way out of place. Even people who grew up in Rumble City know Rumble City makes no sense. Who cares? It’s Rumble City. Everybody needs a car and everybody has a car and that’s what matters. If you need a car you build it yourself for things left lying around. There were infinite cars back in the day, they coated every road like a river of ants. Get one of those. Plus whatever smashed into reality left crazy scrap behind. There are wild impossible machines abandoned in the wastes. Grab an engine, hook it up and see what it does. It might be something good. Maybe your car will go faster. Maybe it turns the sun off like a switch. Give it a pedal and press!

Nothing in Rumble City is ever exactly the right scale.  You think something’s far away, then you see that it’s just small. Like a man half your size or a ship you could pick up. Sometimes it goes the other way. Maybe you have to drive a hatchback the size of a ballroom and race a five meter man on a rocket bike he built himself. Don’t worry about it, the cars still go. It doesn’t matter how big things are, only how fast they go. Scale may not work but distance and time are just fine. Focus on the things that matter. Speed, manoeuvrability and the number of monkeys you can fit in your trunk.

O.K some people are animals now too. They come in different scales and natures. But it’s just people man! Mainly, animals don’t drive but they like to watch the races go. That’s why we call them ‘Fanimals’. It’s good when your team has the best Fanimals. You can hear them cheer, or whatever else it is they do. Plus, they’re handy in a pitch invasion. Fanimals don’t care if you win or lose, only that you race with flair. The more fearless stylings you pop on the track, the better Fanimals you get.
That twenty-foot bear with the googly eyes? That’s my guy. Chester The Bear. Big fan.

The important thing, the really really important thing, is if you ever feel like the gigantic screens and the endless caverns the glowing monoliths that speak, the impossible friends or the fact that nothing ever ever makes sense is getting to you. If you feel like your heads about to explode or like something in the back of your is twitching and about to choke you. Just drive faster. When you are fast, it doesn’t matter. If you win, you win. If you die, you’re not there so at least you didn’t lose. And if you don’t die you can always talk crap on the other racers behind their backs. All that matters is you race. Now.