Scrap has described the Eburnean Attendant

And asked, what is this? 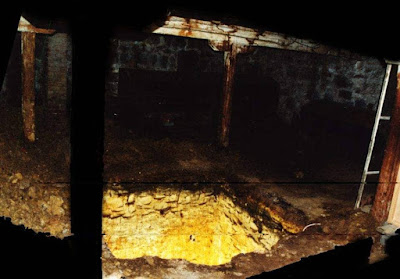 Dost thou taunt me then?

You dare to show me a cave
an hole?

ME??
GREATEST AND DEEPEST OF ALL CAVE DUDES?


Ethel Shotwick, hospitalised with post-partum depression and schizophrenic tendencies in 1962. Released after four months after mild electro-shock therapies and on a prescription of anti-psychotics.

By all accounts became an upstanding member of the community, well-liked by all. Though known for many eccentricities; speaking to walls, threatening shadows with mysterious signs etc.

Ethel was sometimes found out in the early hours, walking the streets of Ofthaven in her nightgown, with one of her 'devices'. These were items she had her husband build for her in their garage, which he did to her instructions after being informed by her Doctors that building and creating was a useful part of Ethels therapy, and that if that was something they could do together, then that would be good for the family. Though he always claimed "I don't know what she does with them".

The Ofthaven police were quite familiar with Ethels night-time escapades and when they heard a call of a strange woman wandering the night in nothing but slippers and a housecoat, wielding a pole-like device humming with some kind of static electricity, often accompanied by bright flashes of light; "like silent fireworks" according to witnesses, they knew what to expect.

"More of Ethels light show" was the word on the dispatch radio. The police grew quite used to escorting Ethel home in the back of their car with her "equipment", which had usually burnt out by this point and an empty box of dog treats for the local strays, and returning her to her frazzled husband at around 4am.

(It was a curious aspect of Ethels residence in Ofthaven that any local stray dogs, and lost dogs were often attracted to Ethel, and would accompany her on her 'nighttime pursuits'. The police grew so used to this that the first place they would look for any missing pet was the Shotwick residence, where it would often be found, with Ethel, having been fed and washed.)

Ethel was by all account a genial and likeable character, though "somewhat skatty", and often treated the police officers like nephews or sons, asking after their families and lives.

Only two incidents disturbed this pattern.

In August 1982, during an unusually hot, yet dark summer, with heavy cloud cover both night and day, and during a spate of teenage suicides, almost certainly due to group hysteria and the infiltration of new drugs into the town, along with a commensurate 'satanic panic' amongst the towns evangelical community, Ethel was found out on her usual rounds but with her Husbands service revolver in her pocket.

She was extremely apologetic to the police and explained that she would never have used it
but the Dark Ray powers were very strong just now.

After the officers spoke to Ethels husband Daniel Shotwick, it was agreed that Ethels night time activities should be curtailed, and Daniel placed a lock on their bedroom door, the key to which he kept tied around his neck, making Ethel promise that she would not take it off.

The second incident took place about a week after Ethels escapade with the gun.

Two officers were called by neighbours hearing loud sounds. Officer Mike Barry, a 20 year veteran, and someone quite familiar with the Ethel, found the house dark and the door unlocked.

Barry claimed he feared home invasion and sent his partner, John VanVort, around the back to catch any 'fleeing suspects'.

This was an unusual break in protocol for Barry, since standard guidance would insist that VanVort entered the house with him as backup.

Annotations to the casefile suggest that Barry likely suspected Suicide, or Murder-Suicide, and wished to spare VanVort, who was in his first week of active service, the sight of the bodies.

VanVort describes the sight of Barrys torch inside the house, then, "a flash of light of some kind, blue-white. Then a scream, really, a really bad scream like someone caught in a machine, with a snarl like twisting metal".

Racing into the house VanVort found Barry in a catatonic state, and with his face and body contorted in such a way that VanVort initially assumed he was deceased, and which was described as 'distressing' by the later attending physician.

VanVort said he found the house 'normal, no-one there, no signs of struggle', but quickly left the scene with Barry.

The photograph in question was taken by the investigative team who returned to the Shotwick house at dawn the following day.

They found the house in good order, but with signs that someone, probably Ethel by the missing clothes, had made quick preparations for a hurried flight. The car was still the the garage.

This image is labelled as being of the Shotwicks "under-basement".

Apparently the Shotwick house had a pine-floor basement which was used as a rec room. During a search of the house, a Police K9 unit located a loose plank, which when removed, exposed a ladder, leading down.

This brought the investigators to what they describe as an "under basement", which this image shows.

No further records or reports of the Shotwick case exist, both Shotwicks being registered a 'missing' in 1982. and 'missing - presumed dead' five years later. The case files have been unopened since that date.


Patient describes a the golden land at the centre of the earth occupied by the beneficent golden ones now too ancient, frail, vulnerable and spiritually pure to emerge into our "fallen world".

Describes lost civilisation of non Homo-Sapiens but related form, as in "something like the Neanderthals" and technological civilisation existing long before the development of agriculture by Homo Sapiens.

The "Elders of Mu" beam the golden radiation of their thoughtful empathy out into the world
blocking, counteracting and reversing the foul mind-control machines of the "Dero".

The Dero are a similar but more ancient race, this one dedicated to evil.

These actions (of the Elders) must be maintained in "deep secrecy" since the Dero machines read and work from, the neocortex and language centres first, infiltrating the rest of the mind invisibly from there, altering its comprehension of reality and changing its memories with "invasive altering mind-phages"

Thusly the Elders of Mu cannot work with the aspects of the literate or self-aware mind and can proceed only through "intuition" and "dream visions" which they bestow upon a "sensitive few".

Patients paracosm is standard, and highly inventive imaginative structure most commonly held with paranoid schizophrenics. The "Dero" and their mind-control devices in particular are a common theme amongst our more troubled patients, though under a variety of names and forms.

The construction of an imagined world in which the patient is central to reality-shaking events but must defend hidden secrets which the outside world would never understand is a classic defence mechanism.

In this case, likely trauma due to stillbirth of child triggered nascent schizophrenic tendencies.

Darker elements of patients fantasy are troubling, nevertheless, patient is increasingly bright, empathic, popular with the staff and is responding well to treatment. Her construction of the "Elders of Mu" as a beneficent life-giving force I take as a positive sign of her personality attempting to reconstruct itself in a healthy and pro-social way.

Considering the patients good character I have bent our treatment programme slightly and made limited use of the "Elders of Mu", using questions as "Wouldn't the Elders want you to get healthy?" and "What do you think the Elders would think of that thought process?".

I realise this does risk embedding the patient ever-more deeply in her paracosm, but her very strong response to this line of treatment and her general improvement in health, vitality and optimism I think justifies this mild 'bending' of the rules.

Patient says she is eager to be healed and to get back to work, which, considering her profession is listed as "housewife" I assume to mean the support of her husband, which I find admirable.

It is a PLATONIC CROCODILE.
Posted by pjamesstuart at 06:55