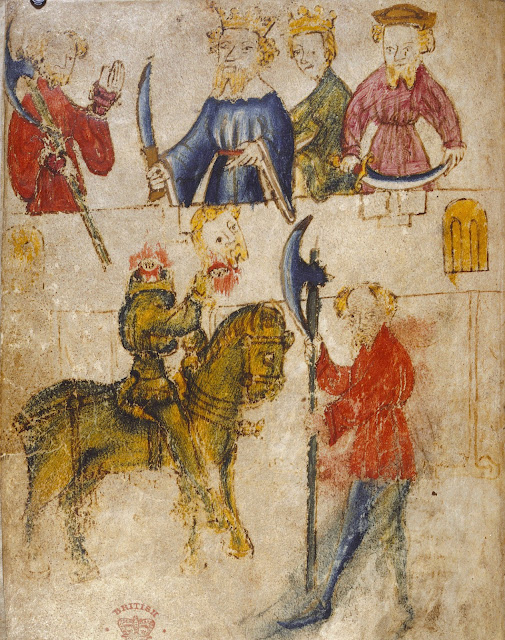 The green knight on the ground, gravely he kneels:
A little lift of the head, he discloses his skin;
His lovely long locks he lays over his crown,
Lets the naked neck to the knight show.
Gawain gripped his axe guardedly, heaved it on high,
Shifted his left foot forward, set it before,
Dropped it down lightly on the dermis bare,
That the braggarts own blade burst open his bones,
And sliced through the sweet meat, and spliced it in twain,
See the bit of the bright steel bite into the ground.
The fair head from the shoulders it span to the earth,
And knocked around rolling, courtiers kicked it away;
The blood burst from the body and blackened on the green.
And neither faltered the fell freak, nor tipped,
But started and sprinted forth upon strong shanks,
And running he reached out among the standing ranks,
Leapt to his lovely head, and lifts it up quick;
And turning boldly to his bronco, the bridle he catches
Steps into the stirrup and strides aloft,
And his head by the hair in his hand holds;
The sire sitting neatly in his saddle seat
As if no mishap he had, though headless now
instead.
He bent his bulk about,
That ugly body that bled;
Many of him had some doubt,
But that his reasons be read.


For he actually held up the head in his hand,
At the princes on the podium he pointed the face,
And it lifted the eye-lids and looked full broad,
And emitted this much from his mouth, as you may now hear:
"Remember, Gawain, be ready to ride as you promised you would
And look as long as you need till you find me my lord,
As you have sworn in this citadel, in sight of these knights.
To the green chapel travel, I charge you to take
Such damage you dealt - deserve you well
To be meticulously indemnified on New Years Morn.
The knight of the green chapel, many men know me;
If you fiercely seek for me you shall not fail.
Therefore come, or claim a cowards name in this world."
With a terse twitch he turned his reins,
And hauled out the hall door, his head in his hand,
That the fire of the flint flared from his foals hooves.
To what kin he belonged knew none there,
Never more than they knew from what country he came.
What then?
The King and Gawain there
At that green they laugh and grin;
Yet most held it full bare
A marvel among those men.

What I found remarkable when translating this is the fluid understatement of the violent act. Everything has been building towards this, Gawain, Arthur and the knight describe and re-describe exactly whats going to happen, the buildup is intense, then, at the final moment Gawain simply shifts his foot a little and the poem reads:

(Those aren't 'g's in the poem.)
(Also my D for L transposition really makes it a little too harsh and sharp, he only 'lets it down lightly, not 'drop it down'

Instead of rising to a percussive and exclamatory point, the strangeness and horror just flows smoothly, with a sense of rising amazement and growing dissonance, keeping the mood and feel of the piece somewhere between a horror story and a joke.

Then at the end:

"He brayde his bulk aboute,
Pat vgly bodi pat bledde;
Moni on of hym had doute,
Bi pat his resounz were redde."

I know "doute" doesn't have the same feel or precise meaning as 'doubt' but its still a glorious and deranged, willful understatement, which will carry over into Arthur and Gawain's reaction in the next stanza and the gradual unfolding of the feeling of threat.