Before your Daily Gawain I'm going to needle you with fucking marketing. As a reward, here's some doggerel.

"The time came then for capitalism,
For bargains and blunders,
And files digital full-many,
A page set rightly, and bundled with the best,
Platters paraded, with PDF's piled,
The format most fine, some say."

I have a terror of my work being downloaded a million times, sitting on a million hard-drives, neatly arranged with a million others, being un-read a million times and un-played a million times. That's why the price for a PDF of Deep Carbon Observatory is the same as the hardcopy and why its free if you buy the hardcopy,that's part of the reason that Fire on the Velvet Horizon will never have a PDF.

Having ploughed through the presumably-less-good offerings of the OSR, the Bundle of Holding people have finally got to the meat, we might say to the piquant quick of our questionable counter-revolution. Just like in a YA post apocalypse film they have seized upon the most lithe, charismatic and brilliant of us and bundled us together in the bleeding-edge technology of PDF. A bunch of bearded white guys will enter, but perhaps slightly less than a bunch will leave!

That mean's, if you like me, you can help fund me going to Gen-Con and possibly meeting Scrap Princess for the first time, and if you fucking hate me you can SHIT IN MY MOUTH by getting DCO for One Dollar Five Cents less than the Real and Eternal price of 10 dollars.


PATRICK WHAT'S IN THIS BUNDLE I CAN'T WAIT TO FIND OUT

>>>Pod Caverns of the Sinister Shroom by Matthew Finch!<<<

BUT THAT'S NOT ALL, if you pay more than the standard $8.95 YOU GET ALL THIS EXTRA STUFF:

>>>Dwimmermount by whoever finished it after James Mal had that breakdown!<<<

And about which I said this:

"Yoon-Suin is about beauty. All of the sights in it are picturesque. Very like an orientalist painting. Even the very horrible locations are a little more ripe than harsh. And the culture depicted in Yoon-Suin is about luxury and about beauty. Its relaxed instead of tight, slow instead of quick, warm rather than cold, lit rather than dark, sad rather than grim, opium not cocaine. Some RPG settings are created, in the manner of Apocalypse world, on a kind of energetic tilt so that whatever the PC's do when they wander into it will have deep ramifications, the world will spin around them. One gets the sense that, no matter how the DM constructs it, the world of Yoon-Suin is not going to change very much regardless of what the players do. The opium barges will still drift down the Yellow River, the slaves will still have rubbish lives, the Slug Men are not going to be deposed from the Yellow City. (Who would bother to? And who would replace the Slug Men? Calm down and have some tea.) The politics of the Hundred Kingdoms will always be chaotic and the chaos will never change. The PC's are simply moving through this world like everyone else."

Misty Isles of the Eld by Chris Kutalik/Hydra Co-Op!

And about which I said this:

"Our worlds betray their makers pretty quickly. You can't create freely and relentlessly for long enough to fill out a book without exposing some weird aspect of who you are. Zak is a godless warren of snow and decadence. Noisms is an opium dream of a distant east, Scrap is full of life and wild animals, I am an endless network of caverns full of cannibalism and madness.

Paolo is Renaissance-Chthonic rather than just Chtnonic. The Codex and the hypogea it describes is powered by strange energies leaking upwards from an inner world. But the caverns aren't totally dark, they are open to the sky much of the time and the stuff leaking in isn't black, its bright.

The book, like the setting, and by my own questionable logic given above, presumably like the man, is about deep energies interacting with the human world, not just our world but specific human beings."


But that isn't all!

If you yes YOU are the highest contributor to the bundle you will get a FREE. BOXED. SET. from Paolo Greco.

Or at least a free box.


Almost as good as that!!

We don't know yet!! But probably something good! A hardcopy of my book for certain, a bunch of other guys are contributing stuff, it will be unique!

The OSR Bundle of Holding Four! It literally has all the maps, dungeons, adventures and whatever you could ever need or want! 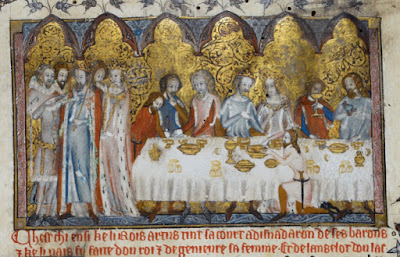 Then king Arthur stored his wonders in his heart.
He let no semblance be seen, but said full high
To the comely queen with courteous speech,
"My darling, do not be to-day dismayed;
Well becomes such craft upon Christs-mass,
Flutes interluding, to laugh and to sing,
Are right kind carols of ladies and knights,
Nevertheless to my meat I may me well dress,
For I have witnessed a wonder, I cannot deny."
He glanced upon Sir Gawain, and gently he said.
"Now sir, hang up thy axe, that has enough hewn."
It was tied above the high table,on tapestries hung
That all men for marvel might on it look,
And by the true title therof to tell the wonder.
Then they bent to a board these bro's together,*
The king and the good knight, and keen men them served
Of all dishes double, as is decent and right.
With all manner of meat and minstrally both,
With a well will they sent that day, till sun sank
under land.
Now don't shrink sir Gawain,
Act like you don't understand,
Or this adventure distain
That you have taken on hand.