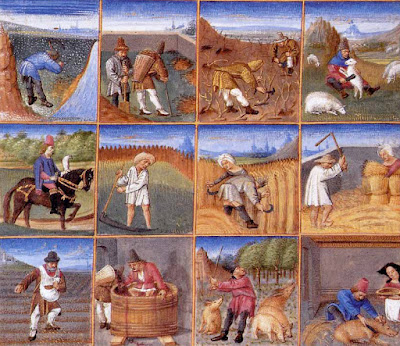 The curled calendar to the king gave his gift,
The heralded adventure he had wished so to hear.
Though his words waned when they went to sit down,
Now they engage in employment, emptying plates.
Gawain was glad to begin those games in hall,
But that the end be regrettable have you no wonder;
For though men may be merry in mind when have they main-drink,
A year swings its pendulum, and perfectly sees,
The first to the finish, rarely resembles.
Fast this yule expires, and the year after,
And each season so leaps after each other,
After Christmas comes the crabbed lent-time,
That frets flesh with the fish and food more simple;
But then the weather of the world with the winter it wars,
Cold collapsing down, clouds up-lifting,
Shedding the shining rain in showers full warm,
Falling on the fair flats, flowers there showing,
Both grounds and the groves green are there clothed,
Birds briskly to build, and brightly sing
For solace of the soft summer that arrives soon
as it could;
And blossoms burgeon to bloom
In rows rich and good,
Then notes and noble tunes
Are heard in lovely wood.


After the season of summer with the soft winds,
When Zepherus sighs himself on seeds and herbs,
Wonderful and wild is what waxes thereof,
When the burnished dew drips from the leaves,
To bide a lustful blush of the bright sun,
Then Winters herald warns them to be about their work;
He drives with drought the dust for to rise,
From the face of the field to fly full high;
Wrathful wind in sky's workshop wrestles with the sun,
The leaves leap from the linden and light on the ground,
And all grays the grass that green was before;
Then all ripens and rots that rose up first,
And thus yields the year in yesterdays many,
And winter winds its clock, as the world stops
its making,
Till Michaelmas morn
Was come, with winter waiting.
Then thinks Gawain full-soon
Of his dark undertaking.

is true, and cuts both ways.

And, considering the circumstances, I will skip ahead a little and tell you something else about Gawain;

And why the pentangle appends to that noble prince
I am intent to tell you, though tarry it me it should:
It is a sign that Solomon set somewhile
In betokening of Truth, by title that it has,
For it is a figure that holds five points,
And each line overlaps and locks with another,
And everywhere it is endless; the English it call
Overall, as I hear, the endless knot.
.....
The fifth five that I find the fellow had
Was Franchise and Fellowship before all things,
His Cleanness and Courtesy crooked were never,
And Pity, that passes all points, these pure five
Were harder hasped in that horse-lord than any other.
Now all these five virtues, verily, were fettled in this knight,
And each hooped in another, that no end they had,
And fixed upon five points that failed never,
Neither ever intersecting, nor sundered neither,
Without an end at any nook my finger could find,
Wherever the game began or came to an end.


Trawth - translated as 'Truth' with a capital T, but 'Trawth' is not exactly truth, it means a little more and has a more specific usage. Probably the closest I can get is 'The quality of keeping your word', or the quality of being wholly what you are entire'. 'Integrity'. Gawains 'Trawth' is directly connected to his 'endless knot', his interconnected qualities that make him what he is. To lose his Trawth is for his knot, his completeness, to fail, to be no longer what he is.

Cleaness - Purity, moral and, for the Gawin poet, sexual as well.

Courtesy - Probably closest to the modern meaning.
Posted by pjamesstuart at 12:00