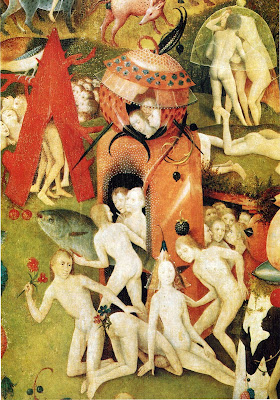 At the first cry of the quest quaked the wild;
The deer in the dale by dread were deranged,
Hied to the hills, but were hemmed closely in
Ringed and restrained by the shouting servants.
They let the harts have the gate, with their high heads,
The bold bucks also with their broad antlers;
For the fierce lord had declared in final season
That there should no man move so the male deer.
The hinds were held in with "hay!" and "war!",
The does driven with great din to the deep dales.
There might man see, as they slipped, slanting arrows;
At each warp through the wood whisked a shaft,
That biggly bit into the brown, with full broad heads.
What! they bray and bleed, by banks that descend,
And all the brachets in a rush rashly them chase,
Hunters with high horn hasted them after
With such a cracking cry as if cliffs had burst.
What wild things so escaped the shooting bows
Were brought down and torn open in the deep dales,
Chased from the high cliffs to chokes by the streams;
The servants so skilled at the ambuscade
And the greyhounds so great, that grab them by jaws
And then fall, crash them as fast as a chasers eye
snapping tight.
The lord for bliss abides
Full oft with lance and light,
And drove that day with joy
Thus to the dark night.


Thus sports this lord through the border-wood eaves
And Gawain the good man in gay bed lies,
Lurks while the daylight gleams on the walls,
Under a coverlet full clear, curtained about.
As he slipped in and out of slumber, it seemed he heard
A little din at his door, which quietly unlocked;
And he heaves up his head out of the clothes,
And a corner of the curtain he casts up a little,
To watch warily what might be thitherward,
It was the lady, loveliest to behold,
That shuts the door after her full stealthy and still,
And crept towards his crib; the knight was ashamed,
And laid him down lightly and let as he slept.
And she stepped softly and still to his bed,
Cast up the curtain and crept within,
And sat her full softly on the bed side,
And watched there waiting to look when he waked.
Gawain lay lurking a full long while,
Compassing his conscience as to what this case might
Mean or amount to - a marvel he thought;
But said he in himself, "More seemly it were
To seek with my speech what she seems to desire."
Then he wakened, and widened and toward her turned,
And unlocked his eye-lids, and let as he wondered,
And crossed him Christs sign, his soul to save
this while.
With chin and cheek full sweet,
Both white and red in guise
Full lovely so she speaks
With lips small she smiles.
Posted by pjamesstuart at 09:27