Flash Gordon and the Bat Sandwich

Who could have guessed that the greatest enemy of cinema would be; 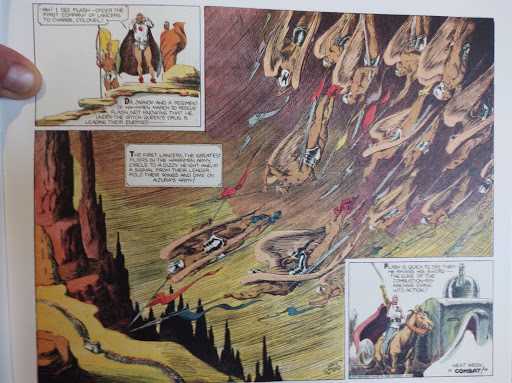 In an attempt to lure people back iin, local cinemas have been putting on old favourites at rescued prices. I went to see Flash Gordon, and then bought the first volume of the collected newspaper strips by Alex Raymond.
I enjoyed every minute of the film, the insane pace is accurate to comic, as is a whole lot of everything else; Hawkmen diving, cities riding on ray-beams, baroque rocketships.
In the comic, the whole start with Mongo somehow threatening earth, Flash and Dale in a plane which crashes right next to Zarkovs lab, who then forces them into his counter-attack rocket with a gun for.. reasons? Then a crash-landing on Mongo, all takes place over one page.
(Flash was a famous *Polo Player* in the original...)
Princess Aura is the best character in the film just as she is in the comic.
There are loads of mildly-honky effects in the film but no bad shots, lots of very broad performances but no actual bad performances. Maybe the guy playing flash maybe, but he plays a good-natured monodirectional athletic lunkhead pretty well. 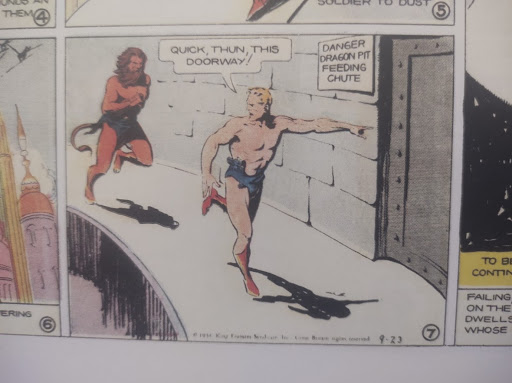 The designs in the film, especially the costume designs for Mings Court, are fucking insanely good,  decadence, lushness and questionable transformed Orientalism (the exotic Other!) seen through a lens probably slathered with whatever they used to use in softcore porn shoots.
Check out the costumes
Not really a surprise that this film did poorly in the U.S. as it’s an extremely, relentlessly, unamerican film in its aesthetic.
In the comic collection the art is lovely, the invention wonderful and the development of Raymonds comic-booking skills charming but even for someone who likes all of that the story is brutally, even oppressively, repetitive.
Flash has gladiatorial duels, fights strange animals, escapes from castles, sneaks into castles, someone has abducted Dale, someone has abducted Flash, friends must battle, enemies learn a new respect for each other, Ming sends out his feudal-tech fleet of ships, a new biome is discovered ruled by a new people with origins in a questionable early 20th century ethnic stereotype.....
Just keep reloading that page basically. 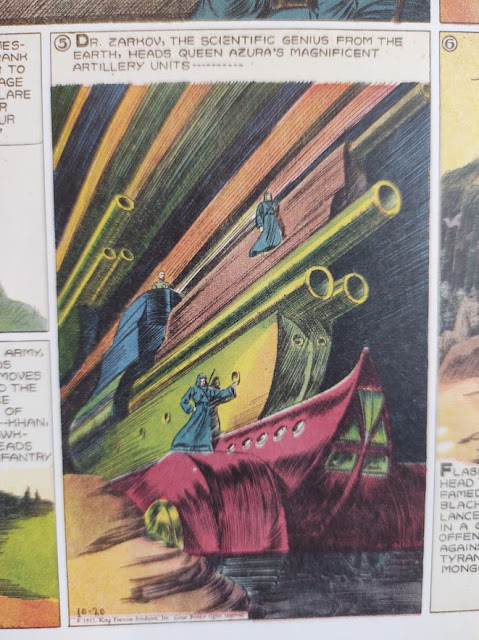 Presumably this has been explained at some point in the long-running comics, or some fan has build a web.. nope I looked it up and apparently it’s just a planet, which I find quite dull, so will be ignoring that I think.
There seem to be a whole lot of moons and planet-fragments bounding and rolling around each other in some kind of aetheric atmosphere. Is it all happening within the envelope of some attenuated gas giant? Or in some solar bubble, maybe a fractured dyson sphere binding the energies of a dying star?
That would probably make more sense for me, it explains the feudal toybox technology in a way familiar to anyone into D&D. A dying red sun at the centre of a fractured sphere the size of a solar system, with wounds and rents the size of worlds, red light leaking out as if from a hooded lantern.
But still holding enough energy that within its both liveable but also fucking HUGE; why it can reasonably call itself the ruler of the Galaxy.
Also explains where all the post-singularity tech and different quasi-human subspecies came from. Remnants of the fall. Also explains Mings super-intelligence. 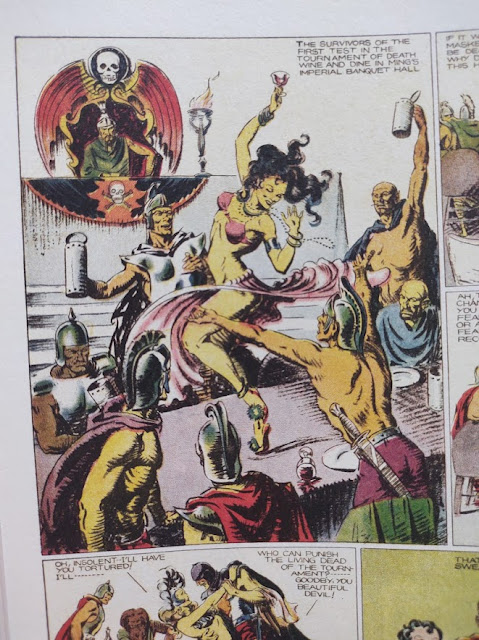 Flash Gordon also feels like a kind of missing link between the 19th Century Theatre-inspired Walter-Scott Expanded Universe and the post-60's pseudo-feudal Deep Future paracosms.
My timeline would be something like this;

17th to 19th Centuries
Printing and mass literacy begin to create the market and mind-state.
Sir Walter Scott (and others) "pulls a Shakespeare" and jams together historical sources and popular storytelling in a manner exciting to the Audience but also informing and reinforcing their cultural identity.
At the same time the orientalist craze ebbs and flows as the industrialising western empires come into deeper contact with a wide variety of non-Western polities.
Many are, or were, richer than the West. The Other who has more money than you is a *decadent empire*. If they have less money than you they are either *savages*, or possibly *noble savages*, indicating that *you* might be the Decadent Empire. (Tacitus there writing a proto TNG episode).
All of this combines with the "hey we discovered ANOTHER strange island" culture, which dates back to the Tempest and Moores Utopia. Utopia being a combination of proto speculative fiction and the recently discovered island culture being a real-life "what if" story.
So the Wests/Anglospheres imaginative landscape of *The Other* is made up of these fancy decadent eastern potentates and mysterious islands with monocultures.

19th Century
That sets the scene for Walter Scott and the Victorian popular novel.
That feeds into Victorian theatre, music hall etc.
Cinema eats the theatre.

1930s
Here comes Alex Raymond with a world based on theatre costumes, circus wear, multicoloured fireworks, rockets, rays, sword fights from theatre and cinema, endless castle escapes and infiltrations from gothic novels and Walter Scott, an evil version of the Chinese Emperor being vaguely but generally ethnically evil, decadence and wealth from a blizzard or orientalist fantasies, single-biome 'worlds' or stage sets like islands in the sea, "primitive" tribes and peoples with Witch-Queens like something from 1000 colonial fantasies and dream versions of real encounters, and, less interesting to Raymond, but more to us, a Feudal social structure combined with super sci-fi Future tech.

Late 1950s/60s
Here comes "proper" Sci Fi, including Asimovs "Foundation", basically "The Fall of the Roman Empire.. in spaaaace". Includes Tech-Priests, predictions of the future, a golden path, and lots of Feudal Empires in space.


1965
Frank Herberts "Dune"
"Dune" is basically a darker-n-edgier Flash Gordon, or an "Alan Moore Does Flash Gordon"
Hey guys guys guys, what if we had an orientalist  19thC lost-desert-prince-returns-to-the-tribes plot _but the tribes were actually the goodies_.
What if we did Asimovs "Evil Psychic Mohammed" plot from the Foundation books, but psychic Mohammed was actually the good guy?
God Emperors, more future visions and crucially, Feudal Space Empires.
And a more clear confabulation of *why* exactly technology and culture produces human-centred Feudal Space Empires and *why* being really good with a knife or sword is more important than having a tank.
Deeper world creation but Walter Scott could have told you why; modern war tech is distant, impersonal, reduces individuality, either annihilates or fails, and broadly, is a fucking nightmare to tell a human-centred story about. Really you need heroes in big families and comprehensible hierarchies fighting with swords over dead fathers and threatened lovers and marriages and crowns and shit, THATS a story buddy!


1977
Star Wars. Lucas does his own Flash Gordon inspired thing. Has some success. Shamefully he takes out the feudal identity structures and swaps 1930s luxury futurism for decayed-new-york worn technology. He does manage to keep the sword fights and the stripe down Hans trouser leg though. 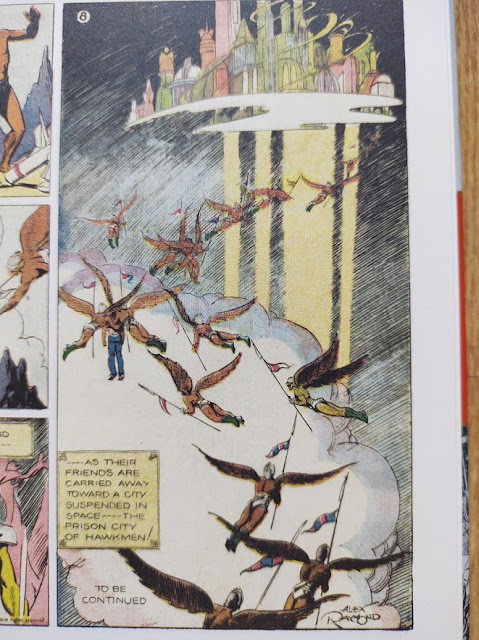 Joy is a valid production of art and very few works of art produce joy. pleasure is an emotion as complex as any, though its engines may be atavistic. A pure response, without much alienation or inner "turning about" is more difficult to consider than a dissonant or multi-tone response, but is just as difficult to produce, (seeing that it is produced well so rarely), and has the same 'depth' as a more-apparently complex response.
Imagine emotion as a light, or as a kind of sonar signal pinging out and echoing back from the hidden trenches of the psyche. A piece of art that produces a complex interplay of signals; a deep corrugated terrain of emotion, memory, experience and intuition, that can be thought of as a deeply textured signal, or a jangly dissonant one, but there is also a response, simple and almost surprising in its lightness, like the sense of locating an unexpected object, finding a whale on your sonar perhaps.
A chime that comes back, largely unaltered, but not without illuminating the depths of memory and experience and emotion first, only that what it illuminates is harmony, oneness, cohesion, "rightness", maybe even playfulness.
Maybe a metaphor I’m looking for is, that while some art is a sonar ping that echoes back as an image of a murky dark, invisible terrain, other art is like a chime or a bell, that echoes back from a house, or a home or a hidden cavern previously unsuspected or ignored, or forgotten and put aside, but returns as a polyphony, its echoes and responses combining into a return signal more complex than the one put out, but coherent, whole within itself, harmonious , and which could not have produced those effects without being, in some sense, emotionally simple to begin with.

IS KLYTUS MEANT TO BE A MASON???

Am I crazy or is that chest symbol *this* symbol??? 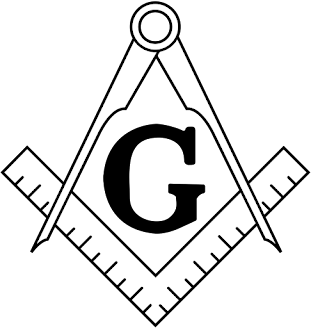 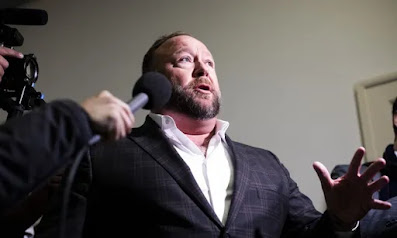 Email ThisBlogThis!Share to TwitterShare to FacebookShare to Pinterest
Labels: 40k, Aesthetics, And keep your concourse in the deeps of his shadowed world, clearly not even about RPG's, I saw a thing, totally gay - totally awesome