Incredibly, the Gawain Kickstarter is now only £548 away from hitting its target, with 23 days left on the clock! 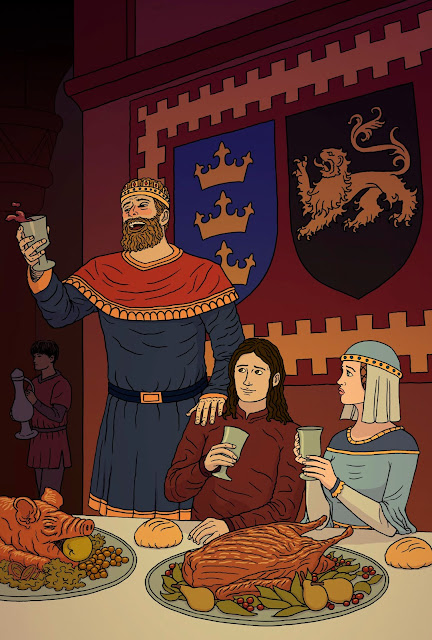 See how happy Arthur is? WHAT COULD GO WRONG????

As a thank-you of sorts, and also as more shameless marketing. Here is a list of Twenty Green Nights taken from all across the Patrickverse;


1. A night lit by the Green Moon itself

Worshipped womb-god of the Chimeric Druids of Uud and quested for in GreySpace by the field-armoured FadeShips of the Genarchs. Some call this moon Umbor, the Green Womb, and claim it as a repository of forbidden and ancient Genological knowledge. For others the moon represents redemption of a kind, or judgement. Appearing and disappearing over millennia, fading from records as magically as it seems to fade from memory, lifetimes can be lost in search of the Green Moon, or it can be stumbled over in a moment due to a glitched drive or fractured co-ordinate blotch.


2. A night lit by the Green-Shifted stars of an entropy-guarded stellar cradle zone

Deep-time Ultra-Sophonts strung adaptive cosmic webs around the shifting mass clouds at the cosmic core. Here the stellar nursery is safe to birth forth stars and potential life-carrying worlds, away from the invisible vampiric entropic effect which infests the rest of GreySpace and which almost certainly spells a slow, accelerated doom for baryonic life in the cosmos.

These cradle-stars glow green through the time-web. Perhaps an effect of the titanic powers of its creation, or perhaps this future cosmos will be lit by the light of green suns, if it survives.


3. A night lit by the Green Lamps of the Viridian ULeague of Nox

Nox, black, Navigator-ruled, city on the Nightmare sea, is a place not famed for mercy. Yet every pseudo-eon in the gap of the Time-God Oct, by ancient stricture, the Viridian Union is permitted to march with its glimmering and delicate emerald lamps. The Union is made up of the descendants of those members of the former-slave classes who rose up to defend Nox from the unregistered cannibalism of the Iron-Eye Islanders from the Bone-Beach sea, when they invaded during the power vacumn left by the fall of the Undead Navarchy.

The numbers of the Union lessen every cycle, life for the descendants of the Viridian League has not been easy, though they are technically granted the rank of 'citizen' they still exist in condemned poverty on the borders of society. Many of their children have fallen back into slavery, or collaped into insane mutation.


4. Seen though Digital-Green Nightvision Goggles on the borders of the Umbral Zone

The pixel-camouflaged draft-troopers on the borders of the Oil-Scarred Umbral Zone trade in Vaseline, which they rub into their faces to ease the sores brought about by the required 24-hour, even-in-sleep wearing of their registered night-vision goggles, and in baby-food which they say eases the deliberate constipation brought about by army rations.


5. Green from the Phyto-luminescence of a Green Sea

On a distant world in the eastern spiral arm of a small Galaxy, lit by a yellow sun, the vast ocean of the southern hemisphere awakens into light. When cut by the wake of ships, the splash of limbs or the ripple of waves, water writhes with its own light, kinesis become illumination.


6. The Green Eyes of the Red-Black Cats of Phrax

Swarms of the miniature Red-Black cats, each no larger than a teacup, but swarming in their hundreds, flow though the jungles of Phrax IX, the leaves turned a seeming black by the sinking of the red sun of Phrax. The large light-sensing eyes of the cats spark like green fire, the iridescent emerald feathers of the Nykicorax they hunt shimmer faintly in the reddish dark and the luminescent breeding glowflies hunted in their turn by the shining birds themselves glow green making a layers constellation of verdant biology.

In the fortress-spinnacles of the dreg-haunted plains of GreyWorld Vanaxis, a "Green Night" is a blessedly rare dark-period in which the rifle-armed guards patrolling the spinnacles warspheres are neither attacked nor probed by the Bio-terror dregs outside. Sixteen hours without railgun fire or impact grenades will be marked by smiles and green flares for the next shift cycles.

The Sun-God ark, poisoned by the mother of Swamps, the Green Leviathan Oouuo, turned all reality a sick, black-green as the poisoned air of the Dragons breath covered the land and absorbed every other colour. Though only golems and the breathless undead remained to witness or record the deed.


9. Burning Copper Cities on the Borderlands of Hell

Only a lamp of another kind. What sins confine souls to the Tin Cities of Hell, and whether the fire consuming them is a deliberate act of Diobolic Justice or simply random caprice, is unknown to all but a handful of visionary screaming theogonists. In the eternal bight of that Black Realm, they are one of a few stable navigating points.


10. A Night inside the Enchanted Emerald of the Sultan of Jazar

The Sultan will sometimes offer exciting or attractive dinner guests (or political enemies) the chance to spend the Night within the enchanted emerald which makes up the centrepiece of his crown.

Within lies a virid and transmorphic reality, all controlled by the mind of the "Demon" Zero-Sleep. Zero-Sleep has until sunrise to convince anyone within his Green World, whether through luxury or fear, to take his place as master of that fragile paracosm. Should he fail, his guests will be released with the sun. (Unless the Sultan hides his gem, but that would ruin his authority with the court for only the wearer of the Gem may rule Jazar).

Sages and Opium smokers sometimes speak of the peaceful dream of a caterpillar which dozes, replete, beneath a half-eaten leaf with a bright summer-sun beating down upon the upward side. For the Sage this is a metaphor for transience and the limited nature of understanding, for the Opium fiend, perhaps simply a desired state of mind.


12. A Sleepless Night at Christmas on a distant Relatives Couch

Curled up awkwardly on a strange-smelling piece of furniture, in an unfamiliar room, watching dying firelight dance across mistletoe, holly wreathes and the needles of a Christmas tree, waiting for inconstant sleep and knowing it will not come soon and not last long.


13. A Night of Eco-Police ShameRaids

A city woken to terror at midnight as Central floods the dying cycle-suburbs with Green police who break open homes and carry out on-the-spot inspections of ReCyc-Rule obedience and Carbon Observance. Those seen to have failed or not noted the primary laws in their own home are dragged out and publicly shamed, mocked and belittled by their own neighbours and friends, themselves terrified and relieved that they are not on the receiving end of this months "Green Night".

Shoom staggered forth from the Tomb of Queen Ave, his vision fogging in the still black night and wild spots of green flaring unpredictably behind his eyes. The cause was massive, terminal and cascading neurological damage from the poisoned breath of the Ur-Tiger guardians of Aves corpse. It was his last green night, but the handful of emeralds found clutched in his dead hands was enough to call yet more fools to their doom in the Queens Necropolis.

The ruined lifeship trapped in a dying vector between LaGrange points of the Veridian system, in the freezing zero-gravity of its cracked and crystal-walled biovaults, the freeze-crystallised fragments of ten million years of planetary life glimmer like emeralds as the spin and dance though the ships dead halls, lit only by pale uncaring stars in the infinite night.


16. Death by Strangulation by the Ular Cult.

Throttled by a band of twisted green silk wrapped around the throat like a garotte, the silk then worn on the subsequent day, in full view of the victims relatives, as both insult and deniable threat. "The Prince sleeps in the deep, green night." So did the Cult of Ular spread their terror throughout the cities of the Bumbling Plains, before their righteous destruction.


17. A night of No Emergencies at the Watchtower of Realities.

In the great tower of the Hyper-Optimates, from which they observe the central-axis and high-energy world-wreaths of the Infinite Empire of Esh, a row of green lights means that no realm or paraverse has been threatened by entropic invasion or inner chaos - a 'Green Night', though a dull one for such adventurous end bellicose guardians.


18. Full Knowledge of the Verdant Tao

For some seekers after the path of the Tao, the 'Green Night' refers to a complex spiritual state indicating something close to what many would call 'ego death', combined with a full revelation of the creative and meaning-generating power of emptiness itself, and therefore a comprehension of the unity of All.

In the lands of the Gackling Moon, during the period where that regrettable satellite shows its Goblinish Face to the world, a Green Night is one of locked doors and pitchforks, as the Moonlands Goblin population is driven into cackling, grasping, gackling, thieving and chaotic overdrive.

In the court of the Jade Emperor the spirits of innocent maidens embroider endlessly upon ribbons of green silk produced at the Emperors request by the Cosmic Caterpillar Om-Kot. The tapestries on these ribbons portray the adventures-after-death of those heroes of the mortal world who acted in the greatest and most noblest intent, but sadly failed too soon.

Email ThisBlogThis!Share to TwitterShare to FacebookShare to Pinterest
Labels: And keep your concourse in the deeps of his shadowed world, Cryptoculture, Gawain, WHOREDOM MODE