First - ITS NEARLY ALL OVER 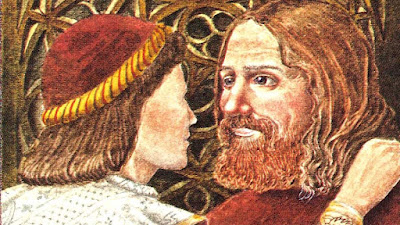 Get on it now or you may end up frenching Lord Bertilak in a semi nonconsentual way.

Losers get a fox-fur and a vague sense of shame!


Ok, here is the last of my questionable marketing content posts. In tribute to Gawains strange Beheading-contest Quest, and for HALLOWEEN WHOOO here are, Seven Strange Beheadings.

1. The Prophet of Uuur was beheaded for blaspheming the Church of the Great God Ark.

But the head continued to prophecy post-mortem and ultimately became the living text of that faith, passing between hands in multiple holy wars, installed in different temples and slowly falling into incomprensability as the means used to preserve it occluded its voice and the nature of its ancient language became more and more subject to interpretation..


2. The Demigod 'Hawks-Shadow' is beheaded by the Crescent Moon

Though their head re-grows with the moon each month. This god hates to be headed and grows desperate and mad the closer the moon moves towards its crescent form. In their extreme desire to escape they usually ends up committing the crimes which necessitate their execution.

3. The Four Knights of the Fox insulted the King of Mice and were sentenced to death.

Beheading by Knight of Mice was the method but they were allowed to choose the scale and manner themselves.

The second Knight of the Fox chose also his own size, but a mouse of that scale also. His end was a little better. The Enormous man-sized Mouse Knight had some trouble manipulating weapons at our scale but took off the head in a few hacks. The King of Mice now sleeps within the painted skull.

The third Knight of the Fox chose to shrink to the scale of a mouse. He died quickly, with honour and ceremony, after giving a great speech which was applauded by weeping mouse maidens. His small head came off with a 'click' and the King of Mice now drinks from his skull, but sorrowfully.

Mice have no mice themselves, they had no art to seek him, and no traps. And so the Fourth fox fled. And when mouse-ladies hear a scampering in the wall, or find cheese with bites taken out, they say "There is the Knight of the Fox."

4. The Foul Duke of Verloon was told by prediction that he would be decapitated by a note.

He was so fearful of his life that he burnt every music shop in his Dukedom and if anyone could sing, he cut their vocal cords with a silver knife. Music was punishable by death and Bards were stoned to the borders

One night, the Harp-Maker, stained with ash from his burnt home and weeping tears for the voice of his singing daughter, went to the forest and string up the last harp-wire he held between two trees.

Sure enough, that very night the Duke raced through, chasing a fiddler at top speed. The tight wire took off his head in a flick. Blood drops sparkled for a moment in the moon and the harp-wire vibrated out a low, clear note.

5. In Sughud, in far Yoon-Suin, a rare and ruinous method of assassination is the Death-By-Amber.

This tends to work best against women, and luxurious Slug-Men, who love their jewels.

Magnificent amber beads are carefully hollowed out and filled with a clear liquid composed via agonisingly careful alchemy. This liquid becomes a powerful explosive under very specific circumstances. Sometimes in sunlight, sometimes via heat or from a hard shock.

A necklace of this substance is then delivered to the target, the trigger for its incandescence linked to the lifestyle of the one who is to die.

They wear the jewels, and the next time they see sunlight, or become very hot from.. exertions, or go dancing, or fall. BOOM, off comes their head.

This method has fallen out of use in Sughud, for the incalculable expense of the materials and the rarity and specificity of the triggering event means many would-be rulers have effectively bankrupted themselves simply through the means of assassination they chose.

War is cheaper. And more reliable.

6. The God-Kings of the Aurulent Empire may not be hurt by mortal hands.

The only One with the right to harm them is their father, the sun.

So the terrible fate for a fallen God-King is that of Beheading by the Sun.

Strapped to an obsidian table in a temple of lenses and mirrors, with their neck in an exact position beneath the final focusing lens, they can only wait for the sun to rise and pass across the sky, smelling their own cooking flesh as the wandering ray sloooowly burns through the meat of their spine.

Since the ray cauterises as is passes, it can take a very long time for them to die. And if the Sun withholds his judgement, and is obstructed by vengeful clouds, it can take more than one day for the sentence to be carried out.


7. The Great Judge Scaedeweald sentenced himself to death.

He famously hated crime so much that, on discovering that he had executed the wrong man for murder, he sentenced himself to death. He then appealed, but then refused his own appeal.

He was pardoned by King Aescelm, on condition that he be turned, via magic, into an Axe, thereby to punish crime and treason forever in that form.

This plan itself rebounded when King Aescelm invaded his former kingdom at the head of an army of mercenaries, after being deposed for his cruel rule and fetish for turning people into magic objects. He died under the bit of Judge Scaedweald.

The Axe still refuses to cut anyone who is not legally guilty.