Review of "Unfamiliar Underground: Finding the Calm in the Chaos of London's Tube Stations" 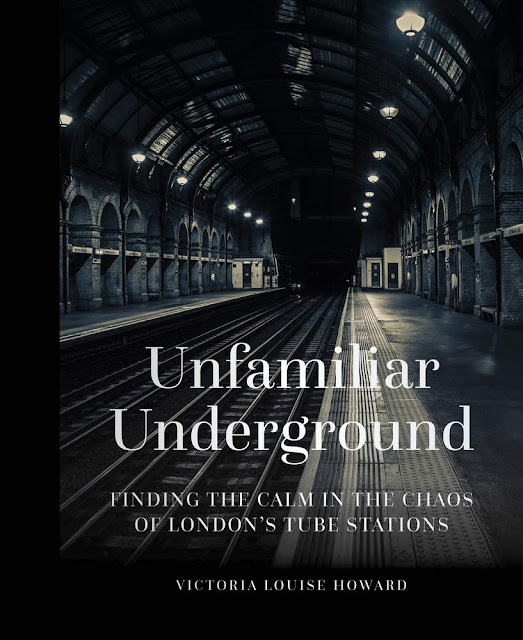 This is a beautiful and somewhat odd collection of empty industrial nocturnes. You probably know how much I love a shadow and this book is like a stamp-collection of shadows printed on glossy photographic paper which marks with fingerprint heatstains under my passing hands.

In a thronged environment emptiness and silence become rare jewels to be sought, or more like shadowy birds, and Victoria Louise Howard must adopt the attitude of a hunter, rising in darkness and setting off deep into the city, staking out her view and stalking empty split seconds in which to catch light.

She has the particular thrill of stalking some difficult stations again and again, piercing and waiting, feeling embarrassed and awkward, until she can leap and snatch the bird if emptiness.

From her notes, some stations and some pictures are truly, largely empty when she takes the picture, but others are busy and the emptiness we see in the the image is literally one single moment of time between someone entering and leaving the frame.

They are theatres of shadow split by the curving parralax of shining rails. Infinite tubes curl and turn into invisible distances. Decay, full real wet decay, in the one or two places where it is evident, has an increadible glistining texture of its own. Enigmas from fifteen decades of built history, from victorian to brutalist to brushed chrome, sealed in specifc lattices of time by pop culture posters which glow like bright rectangular ghosts, illuminating one particular eon of advertsing, and by the occasioal digital display giving an exact time, and the time till next train, but not the day, or week. So we can know exactly what minute and second a picture was taken on, and that the Emily Blunt starring "Girl on the Train" was showing, but not the day. Some are marked by abandonend papers, cups, and in the radical third act reveal, a lost boot at Notting Hill Gate.

Howard takes a deep pleasure in these signifying ephemera. She is an astonishingly normal to be taking such intense, gloomy and alienated Nocturnes. From her tone of voice you would expect her to be putting together a book of remarkable dogs, but the tone of the image says "exiled russian anarchist and lover of praxis", [insert name here] seems more a British eccentric who happens to be a really really good photographer.

Howard was pursued by crushing anxiety and health problems. She loses years in the middle, ends relationships, at some points she feels she cannot go on. The hunting of the stations is as much an internal battle with her own fear and crawling uncertain and frightening thoughts as it is with logistics and crowds. So the story of the empty stations is also her story, and her adventure, in the old sense of the word.