First, the Gawain Kickstarter for an illustrated, hardback print of my version of "Gawain and the Green Knight" is FUNDED, and has been for a few days. 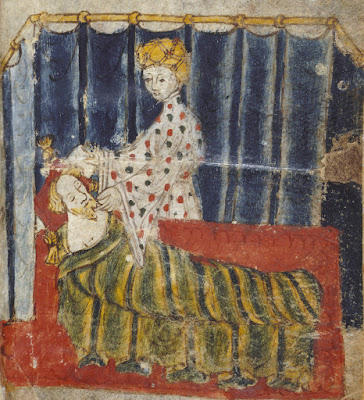 So this is going to happen and people are going to get their books.

As of the 18th everyone who backs for a print copy gets a digital copy for free.

If you want extra gubbins added on and have an idea, we have nine days left so drop me a comment in the Kickstarter.

Dans Notes on the Art Development;


My.. whatever I was doing here;


Pilgrims of the Green Moon


Words not Swords. Just delete the "S". What follows is my attempt to create a kind of mission or situation generator for problems that can only be solved by courtesy.

I was trying to take apart the complex situation between Gawain, Bertilak and Lady Bertilak in the poem, to see if I could create a generator to produce situations like that.

Essentially - no, but I came up with this instead. 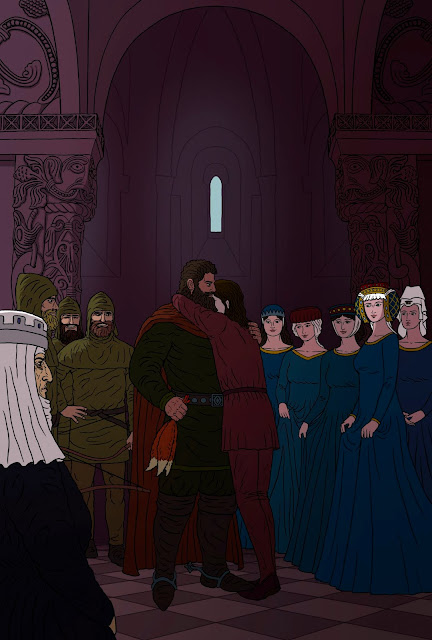 First, the feudal Matrix. This has to be a place limited and bound in some way, so that neither the Quester, nor anyone else, can just avoid the problem by leaving. It also has to be a 'civil' place, with reasons for people to talk to one another, and with enough room and potential anonymity for intrigue and sneaking around.


A - You are All In:
(d6)
1. The Court at Christmas. Its freezing out and no-one should leave until festivities are done.
2. A Ship becalmed at Sea.
3. An Enchanted Forest or garden. Full of Glades and Strange Airs. No-one can get out until the situation is resolved.
4. A Monastery or Nunnery. Possibly one or more of you are in disguise as the other gender.
5. A Masque Ball - Plague is ravaging the country outside.
6. A Castle under siege.


(You can just apply your own character to this, but they should be something like a Knight or Lady, someone high-status, known to be courteous? Someone with enough of a social role that surrendering it will be a serious loss.

In the poem, people keep telling Gawain "You are not Gawain". His position as current Best Knight of Arthurs Court makes him a simultaneous badass, moral paragon, celebrity and fetish object. He tries really, very hard to live up to this role and ultimately fails, which is part of what leaves him so crushed at the end of the book.

Whoever the main protagonist or 'player' is, they need to, essentially not be an old-school D&D protagonist. They need to care about their social role and to fear humiliation and to want to live up to the positive qualities their role exhibits. If the Player Character is Cugel the Clever, you might get an interesting game of manipulation but I think that's all.

Of course you can "create" these situations in D&D temporarily by turning the desired personality shift into a voluntary diegetic element; "You can go to the party but you have to wear this crown which ensures you can only be courteous / accept the Witches curse or Geas / wear this Jewel which the Quest-Giver will observe through." etc.

C - One you May Not Offend
(d10)
1. A powerful secretive and dangerous Witch, possibly under a Glamour.
2. Your Queen. Beautiful, adored by all and the only thing holding the nation together.
3. A Maiden, known by all for Purity and Virtue, daughter of a powerful Duke.
4. A Nature Spirit, Dryad or Forest Fey, who rules the wild lands around.
5. The Ghost of an innocent murdered girl. May not know she is a ghost. Fulfilling her desire may set her free.
6. Crowd of Washer Women & Serving Girls. The lower orders may revolt, leading to danger for you, or a massacre of them.
7. A Beautiful Courtesan. Desired by all, with many strong Knights obedient to her word.
8. The Abbess of a Nunnery. A Royal relation known for learning and religious observance.
9. An Imperious Small Princess.
10. Your Mother.


D - Another You Fear to Refuse
(d10)
1. Your King! Brave, handsome, beloved and the only thing holding the country together.
2. The Bishop. Wise, respected, charitable, wealthy and observant.
3. The Wizard. A respected, if mercurial, Adviser of unknown, but potentially vast, power.
4. The Kings Champion. First Knight of the Kingdom, handsome and feared.
5. A Foreign Potentate. Wealthy, imperious, powerful. Your nations teeter on the edge of war or alliance.
6. A powerful Ogre or Giant. One who could seriously wreck the place. Possibly temporarily changed in shape or under a Glamour.
7. A Holy Hermit, famous for visions and access to God.
8. A Grieving Father who has recently lost his Daughter or Son.
9. A Powerful Moneylender (probably a Jew if you are going 'real-ish Middle Ages).
10. A Demon! In Human Form!


E - The Object of their Desire

F - The Nature of their Overwhelming Desire

1. Desire-based desire. They wish to possess their object sexually*.
2. Pride. They must have their greatness recognised and admitted to, in public terms, by their object.
3. Suspicion. They are certain their Object is Up To Something and obsess over worming out their secrets.
4. Faith. They have a deep religious interest. Either conversion, corruption or something else.
5. Honour. They either feel slighted by the Object in some way, or are obsessed with testing their Honour.
6. Hate. They despise the object and secretly want to ruin them.

(*Unless you roll something which makes this too creepy to game, like your Mother or a child. (Unless you are playing a real dark game.))


So to create a Courteous Problem, roll

A - A Place and Situation.

C - One you may Not Offend.
E - The Object of their Desire.
F - The Nature of that Desire.

D - Another you Fear to Refuse.
E - The Object of their Desire.
F - The Nature of that Desire.

That should create a near-impossible problem of courtesy.

If you want something a little more focused you can simply roll once for E - The Object of their Desire, meaning both are obsessed with the same person (or each other), and possibly once for F - The Nature of the Desire, meaning they both want the same thing (although if its sexual, that may be a short adventure.

Well that doesn't quite produce Gawain-Level situations, but it may at least produce some interesting situations.