Would you Fund this Weird Gawain Project?

Some of you may be familiar with my thing for Renaissance Chivalric Poetry, like the time I did a version of the 'Gawain and the Green Knight' poem, ending here, or the time I spent months going through, and reading aloud, the Faerie Queene by Spenser, ending here. 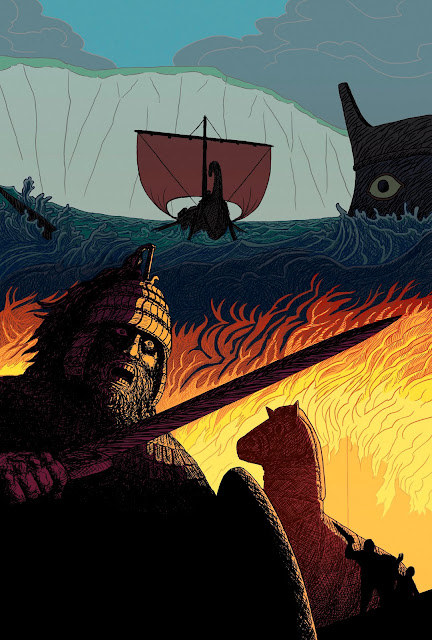 "Since the siege and the assault was ceased at Troy,
The burg broken and burnt to brands and ashes,
The turd that the strands of treason there wove,
Was tried for his treachery, the truest on earth."


This image is by Daniel Puerta, who you can find on Tumblr, Twitter and Facebook. Aaan here is his intro;

"So far the biggest thing I have worked on is the illustrated edition of "At the Mountains of Madness" by Ediciones T&T: https://www.edicionestyt.com/producto/en-las-montanas-de-la-locura---preventa/16


For that editor I have illustrated a couple of roleplaying adventures, one for the game Ragnarok called "Pryroda Zvira" and other for Dungeons & Cthulhu "La Siniestra Fortaleza de Bahía Espinosa"

I have also have done three illustrations for the bestiary "Criaturas del Vacío Celeste";
https://www.drivethrurpg.com/product/223740/Criaturas-del-Vacio-Celeste

[I just realized that on drivethrurpg there is a free sample of a game that was never finished "Dioses Extraños", that has some of my drawings: https://www.drivethrurpg.com/product/164602/Dioses-Extranos-Quickstart

But I uploaded them on my tumblr long ago at https://dandibuja.tumblr.com/tagged/dioses-extra%C3%B1os
but I'm not sure if this counts]

I also illustrated an adventure for the roleplaying game "Tesoro y Gloria", called "El trueno sin relámpago" but it hasn't been published yet. http://tesoroygloria.com/

I have done other things, a couple of book covers and illustrations for a children's book and for local cultural and historical expositions, but I believe the best examples of my current work are those above." 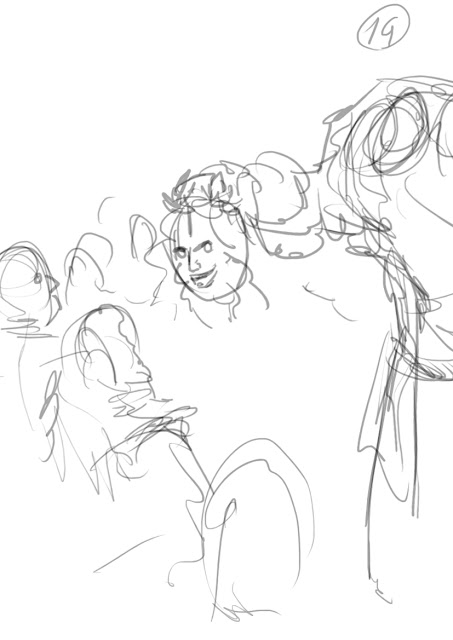 "The blood burst from the body and blackened on the green.
And neither faltered the fell freak, nor tipped,
But started and sprinted forth upon strong shanks,
And running he reached out among the standing ranks,
Leapt to his lovely head, and lifts it up quick;
And turning boldly to his bronco, the bridle he snatches
Steps into the stirrup and strides aloft,
And his head by the hair in his hand holds;
The sire sitting neatly in his saddle seat
As if no mishap he had, though headless now
instead."

For the past, months? year? multiple years? Its been a while. For a while now Daniel has been working on a set of illustrations to go along with my strange semi-translation of the Gawain poem.

Aaaaaand, they are all pretty much done.

That's twenty illustrations, plus a cover, for an A5 book of a little over 100 pages.

All of this is laid out by Mateo Diaz Torres who used to blog at Gloomtrain and who I think now blogs at Hex Culture. 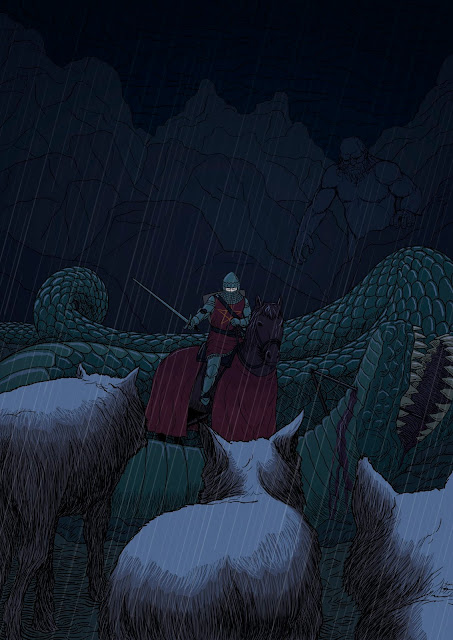 "At each warp-over-water where he wished he could cross
If he found no foe before him, a wonder it was
And one so foul and so fell that fight them he must.
So many marvels in mountains there the man finds,
It were too sore to tell of the tenth part.
Somewhile with wyrms he wars, and with wolves as well,
Somewhile with Woodwose who waited in stones,
Both with bulls and with bears, and boars otherwhile.
And Eoten that him attacked from the high fells;
If not grim and grit-hard and God he had served,
Doubtless he had been dead and dashed full oft."

We can do a kinda-OK'ish PoD version easily enough.

However, this blog post is about trying to discover if there is any interest in a fancy Kickstarted properly-printed high quality version.

This would still be A5, just with a fancier cover, real binding, thicker paper and just generally more like an actual book. We would probably print in the U.K. and ship from here as, being small, the book should be relatively easy to post.

I haven't made any of the calls required to cost this out yet, this is more of an exploratory post to see if there is any interest at all.

I mean, its a book of poetry, translated in a wierd way, with illustrations. It has almost no game or RPG utility at all. 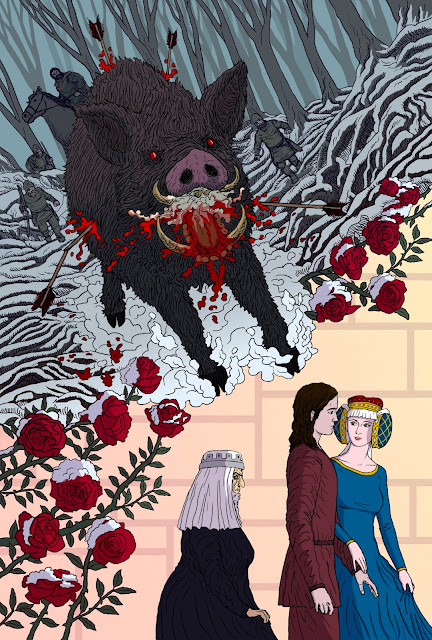 "The wild one was aware of the weapon in his hands,
His bristles bunched, out burst such a snort
Those lads feared for their lord, lest befell him the worst.
The swine surged him out at the stalking man so,
The boar and Lord Bertilak both fell in a heap,
In the swift part of the water; the worst had the former,
For the man marks him well, as they meet first,
Set strongly the sharp in the swines throat,
Hit him up to the hilt, that the heart sundered,
And snarling he fell, was swept under the stream,
into its core."

One reason some of you might be interested is that, if you have got your hands on Silent Titans yet, or have looked through the PDF, and if you are familiar with my Gawain semi-translation, then you may well have noticed certain clues or elements suggestive of a certain someone and their presence in the Silent Titans background. 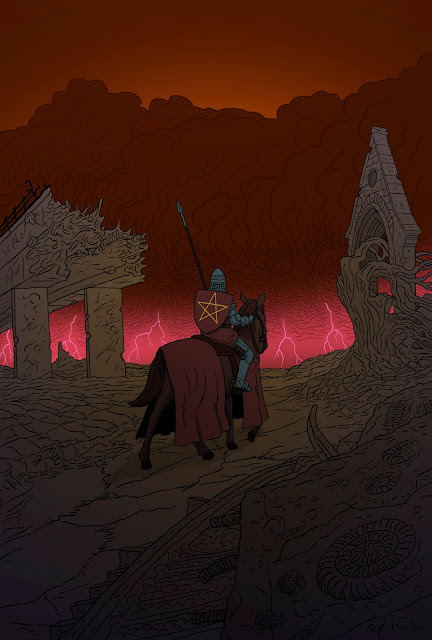 So, if you want this in a fancy specially-printed version, say something somewhere, either here in a comment, or on facebook or elsewhere I will see it and if there is a non-trivial response I will start looking at costs and printers and postage,

Email ThisBlogThis!Share to TwitterShare to FacebookShare to Pinterest
Labels: Gawain