A Review of 'Priceless' by William Poundstone

This is an interesting book about price.

Its written for business people. Chapters are short and punchy with a form as regular as poetry; a set-up, investigation, explanation and then musing on meaning.

"One of America's longest-running Guy Grand pranks takes place every day just off 1-40 in Amarillo. A giant steer statue us blazoned with a sign advertising a FREE 72 OZ STEAK."

From here we descend into the Gospel of Poundstone, or more like the Torah of Poundstone as the Gospels themselves are micro stories of the lives and investigations of academics, economists, psychologists and business people investigating the nature of prices.

There is a study, or a series of studies, or a 'latest study', which takes place in a lab, in the U.S. or Israel. These labs are like temples of logical knowledge which issue out these subtle riddles of behaviour or thought which are meant to reveal something about humanity and the way it thinks. In one scene a guy in the U.S. constructs a room in a building that _invisibly tilts on its axis due to hidden workings_, this is to measure if or how much people are aware of their actual balance without meaningful cues. The room is set to lure people in with fake free eye tests and then to move around secretly and see if they notice.

(People sense something is wrong, but they often don't relate it to movement.)

The riddle is considered, examples are given.

Some thought is dedicated to the overall meaning of the consequences should the riddle be found to be a full truth. But only for a few paragraphs. The chapters are short, like blog posts, magazine articles. They are *punchy*. Constructed like SEO-optimised trade-speak clickbait  blog posts. Artfully constructed; bit of human interest, bit of academic soap opera, bit of theory, dab of mathematics, knowing tie-up at the end.

So those are the onrushing pebbles of Poundstones argument. They never entirely or purely cohere into a directly-stated synthesis or final statement. But it is not hard to work out his meaning. His argument is that the prices for a lot of things are very close to being imaginary.

You probably have a rough personal intuition of how imaginary or made-up most prices are; well double that, or maybe triple it, or increase it by a factor of something. It is all light and air, or so it would seem.

Humans judge by ratio very keenly and are totally bonkers when it comes to abstract values. If you want to change someone’s thoughts about pricing, change the ratios that are present when someone thinks about it. Therein lies almost all of everything anyone ever did to find a way to raise a price.

Humans assign value by primate-relevant qualities. Considering Price, alone, deeply, actually brings you back into contact with the whole of the human experience, because when assigning an abstract value to something, it seems that what really matters is human context. People draw from their entire physical and social experience of the world when negotiating with each other.

In particular, people are much more loss-averse than they are success hungry, and they are much, _much_ more averse to letting someone treat them in an 'unfair' way than they are desirous of getting free, or extra, resources.

So people will literally turn down a free lunch if it comes with an assumed loss of relative status or participation in a deal in which someone is seen to have an unfair advantage over them, even if in rational absolute terms they only gain by the exchange.

So, 'value', though seemingly abstract, is like a puncture hole though the skin into a deeply human world of social networks, personal status, testosterone levels, fear of loss, desire to impress and just a very apelike, living, human experience of reality.


Heuristics are a thing. Humans use simple, usually ratio-based intuitive shortcuts based on environmental factors in order to work out the value of thigs. When considered singly, isolated away from their ecology of thought and zoned-in on in a lab, all of these heuristics break down. They are 'non-logical' and can be made to be wrong with tricks of logic.

The question of how powerful this effect is in real-life is a primary moral axis of the book. Unusually, Economists and Humanists are on the same side in this one, they both want the decisions people make to 'make sense' and to be fundamentally rational, or at least, reasonable. Even if they break down in the lab it is hoped human decision making works 'as a whole'.

Poundstone seems to be on the other side, the general drift of his argument is that prices are deeply and worryingly ethereal and much of human value-assignment is basically a holodeck episode.

Priceless absolutely abounds in factoids, little slivers and pieces of counter-intuitive, strange or just interesting discoveries and secrets. Here are a few;


There is/was a weird culture war/intellectual war between Economists and Psychologists. Economists seem to move in an ethereal realm of pure figures and absolute values on which the great machinery of their thought is based. Psychologists are a bit dirty, manipulative and fluid, they chew away at the absolute values Economists need to build their palaces, revealing them to be little more than dreams.

So in the partial history of the relations between Psychologists and Economists that makes up a strand of the book, Economists have a habit of just straight-out dismissing anything Psychologists say with "Oh, _psychology_)", at least for the start of the book. So that is an interesting example of subjects or cultures deciding to just not talk to each other. Or at least, not to listen.

"Fisher aspired to predict prices from supply and demand. His thesis described how to do that, and Fisher went so far as to build a price-generating machine (see page 225). It was a tank of water with a flotilla of half-flooded wooden "cisterns" connected by a system of levers. Adjustments to "stoppers" and levers fed in data on incomes, marginal utilities, and supplies; then prices could be read off scales. Gibbs must have been pleased. The device prefigured, if not parodied, the direction of twentieth-century economics. ("Press stopper I and raise III," read part of Fishers instructions for the thing. "I, II, III now represent a wealthy middle class and poor man respectively...") 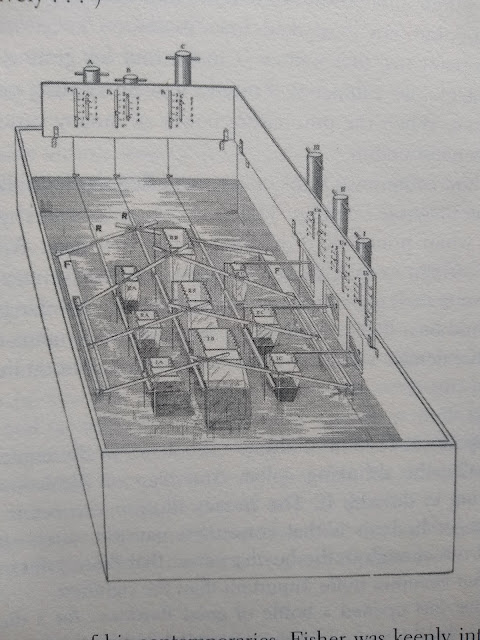 "I absolutely thought [pay] would go down because the disclosures would be so embarrassing," recalled Graef Crystal, an architect of those disclosure rules. "But it turned out that when somebody is hauling in $200 million, he's not embarrassable."

"After years of work-around like half-dozen cartons of eggs and ever-shrinking containers of milk, it bit the bullet and raised its top price to $99.99. For president Jeff Gold, it was almost like a death in the family. 'The number 99 is a magic number - deviating from that is something we absolutely are not taking lightly,' he said. 'I find significant discomfort emotionally about considering making the change.'

There is much much more, its something of a wunderkammer of these, more than it is a book almost.

There were layers to my response to 'Priceless'. I often found it 'clever', in a mildly frustrating way. The glib single-idea 'gotchas' of business writing or magazine articles. I intuitively strongly dislike what I perceived as a mild wash of slightly sneering superiority through the opening parts of the book.

Under that, its actually interesting. The basic deal is that price, which bills itself as a firm and near-abstract unit of measurement, is a deeply human construct. On the down side this means the world economy is largely a collective hallucination and could collapse or change hugely at any time. On the more positive (to me) side, Economics is not just a part of the Humanities, it’s actually a Romance. Piercing through the needle-dot of price reveals a cosmos of human emotion, human feeling and human social relationships, illogical, 'irrational', but making organic sense, not without reason or meaning and if not entirely within our control then at least within our capacity to understand.

Email ThisBlogThis!Share to TwitterShare to FacebookShare to Pinterest
Labels: clearly not even about RPG's, I read a book