A Review of Vances Lyonesse (with spoilers)

(I did review Suldruns Garden on Goodreads earlier and there are bits of that review in this.)

Vance is a prose obsessive, though not with a heavily-rhythm'd euphonic 'sounded' line. Instead of sombre rolls of declarative speech, we get words as playful toys, his characters are always thinking and manipulating, rather than emoting and revealing. Flute music rather than drums.

And he shows an enormous and overwhelming dedication to, and incredible talent for, the embroidery of names and places. He has a kind of Genius for it. 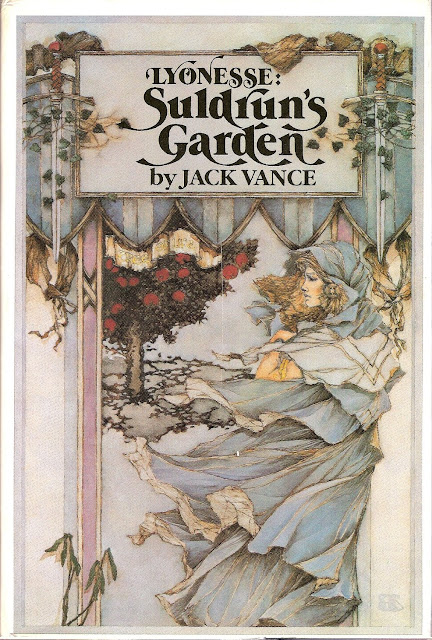 This feeds into his meticulous worldbuilding, and correctness in matters of scale and location. (I suspect stuff like relative troop numbers and economic capacities was worked out behind the scenes.) Distance, as a dramatic element, matters. A big part of Suldruns Garden is a man desperately trying to travel a long way and being stopped, and the movements of everyone else are all locked together.

Its perhaps a little mediocre to say that a story has its times and distances sorted out, but it does also play into Vances love of procedural problem solving. Problems are never (for a pov character), simply elided with "oh they did it because they have heroic power". They have to solve it with the tools at hand and you have to see them solving it.

In a way, his stories are a contest between procedural problem solvers - with the 'hero' of Suldruns Garden effectively being the best problem-solver and the story of the 'hero' being one of bad things happening to him and him surviving them until he gets really, really ruthless about problem solving.

The grasping amorality of Vances characters is curious, and unrealistic. Not in that it doesn't happen, but that it can't happen that totally or that absolutely. Even in a corrupt kleptocracy, sometimes you ask for a drink and the price is just the price. I doubt any society could survive for long with everyone acting like a Jack Vance character.

The characters run all the way from predatory rapist sub-magician, to near sociopathic realpolitik monarch to magicians; pervy, indifferent and bad, to the good characters, who are often heroic, but rarely idealistic, and who are always, unquestionably, tricky, lateral, practical and extremely defensive about money.

There is an obsession with the driving mediocrity of a lot of peoples shitty ambitions and the enormous length many of them will go to in order to fulfil them. There are many, many, many, MANY of what I call 'grey negotiation scenes' where two characters argue at length about the precise nature of a deal, with a lot of self-justification and itemisation with a deep sense that at least one side, and probably both, are trying to fuck each other over while retaining the slightest veneer of civility.

I hate this kind of conversation in real life and I don't really like them here. They do work very well at highlighting the dark and threatening nature of the world, almost anyone could screw you over at any time for the most venal and pathetic of reasons. In particular, a scene in the last book with a group of travelling entertainers invisibly and relentlessly pressing against the social boundaries of a par of travelling children, culminating in their total robbery, is almost tangibly unpleasant.

(The same scene makes clear the enormous, but rarely directly stated vulnerability of women in Vances world, dependent on men for protection and also afraid of their would-be protectors, should their mood change.) 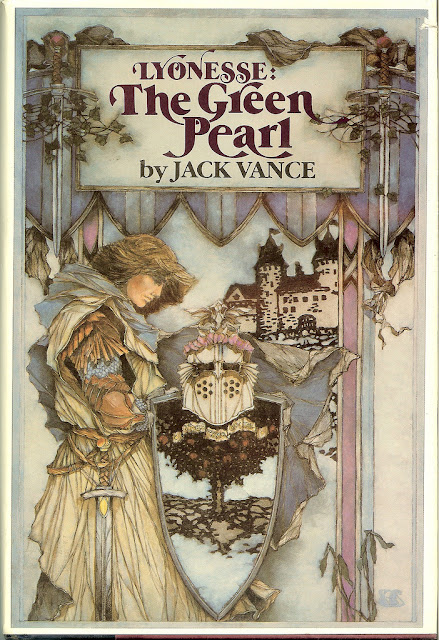 And it fits with the dark logic of the Fairytale, where any particular deal or mislaid word can crush you, so that works.

I keep wondering what the hell happened in Jack Vances life, but it looks like the great depression hit when he was 14 so maybe that explains it?

He has a fondness for sociopaths; the two layers of the story of Suldruns Garden are driven by two different sociopaths - King Casmir, who wants power and feels almost nothing, and Ffaude Carfilhiot, a magic man made from one third of the soul of a Sorceress who breathed in a bit of the burnt evil third and is now a handsome narcissistic villain. (Another Carfilhiot-type is re-introduced in later books, a Ska renagade who is almost perfectly Iago-esqe in his remorseless power-hunger).

The material world is unforgiving - but the people in it aren't. Suldrun and her lover refuse to kill a creepy priest - he entirely predictably fucks them over by revealing her pregnancy - and then revealing the identity of the dead baby they used to hide their real child. In later books he eventually screws the family again by revealing more information. He is eventually drowned. Sometimes being good and kind gets you screwed - at various other times it helps people stay alive, gain advantages or meet important allies.

With this comes a general air of tragedy and inevitability. When people are making bad choices, especially when considered generationaly - as a result of the way they were brought up or of what they have experienced - their situations seem almost fated, as if being who they are, what they are, and believing what they do about themselves, there is nothing else they could do in that situation other than what they did.

Not discussing information assumed as standard.

Cruelty and advantage have a voice, they talk and describe themselves at length, they are verbose. Moments of affection, friendship and loyalty tend to be silent. They are inferred by action and event - not self-described or discussed till moments of stress and then often as a threat. (Affection and friendship being extremely double-edged blades in Vances mind and maybe his sympathies being split.)

There’s a fair amount of sex in Lyonesse, with sexual desire as a mover of action. (Almost as much as in the real world.) A suffused physicality and general hornieness. There really is quite a lot of inferred, threatened and actual sexual assault now I come to think of it. Plus inferred intra-generational attraction. Also I think a twelve year old girl gets raped by a giant?

Christians are somewhat rubbish in Vance, as they are in Cornwell. The Holy Grail turns up, does no good for anyone and is ultimately lost in a footnote.

Vance has his science-fictional demon-dimensions for transcendence and his own moral logic which has nothing to do with Christianity. He would probably see it as a scam.

Jack Vance is not a transcendent man. 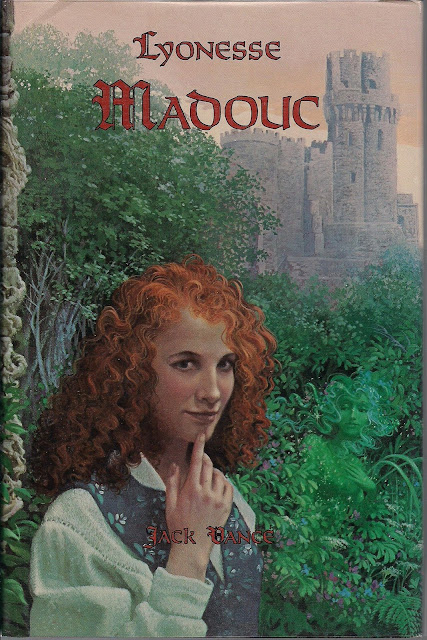 The structure is interesting.

Lyonesse is a non-story-shaped-story, that is making a bit of a point about not being shaped like a standard narrative

Different power levels interweave, the plot loops elliptically and this artifice mimics the strangeness of our reality. The reader, like the characters, never knows what small and apparently irrelevant element will turn out to actually be insanely super-important.

At the end of the book, a strange figure tied up in a wizards cupboard manages to loose an arm.

In fact, a Witch, upset by the deeds of men, and with the aid of a Demonic colour green, has launched a decades-long multi-layered assassination plot which included her apparent death and subdivision into multiple quasi-autonomous sub-personalities. .

The green is at war in another dimension with even stranger dimensional powers and ultimately loses, or loses this battle anyway. But it's this struggle which leads to the loosing of the figure.

The figure is actually the representation of a gogmagogic giant, trapped on the oceans floor. In the cupboard he raises his free arm and out in the sea an arm the size of a nation rears up.

They get the guy in the cupboard back under control, the arm at sea goes back down. The volume of water displaced by this causes a tidal wave which wipes an entire coast of Lyonesse, including a timeless city of Legend. This is probably the biggest loss of life in the book.

The chaos caused by this forms the trigger for the main evil King to launch his invasion plan, which ends up slaughtering even more people and leads to his doom and the resolution of the story.

This happens towards the end of book three. A footnote at the beginning of book one says the main harbour to Lyonesse town, in mythic ages past, was carved out with the aid of a sub-aquatic giant.

I barely noticed this footnote (two books back), and with the kind of book Lyonesse is, there are probably a lot more of this kind of thing that I didn't detect. Presumably someone, somewhere, has done a website.

And that, in miniature, is the structure of Lyonesse. There's probably a name for it.

(Vances integration of Faerie into a near-real pseudo-medievalism is very well done and surprisingly fun. There are deep-Faerie zones where you are entirely likely to encounter say, a Witch, who hides you in her hat and sells you to a Troll who intends to eat you. and as you get further and further away from that space fairy stuff and magic  turns into a mysterious threat instead of an everyday danger - and then there are areas of the story where stuff like economics and politics are exponentially more important BUT it is always reasonable everywhere to consider magic and if someone turns up saying that they don't know where they are because they offended a rabbits wife and the rabbit was a butler to a fairy lord and the lord wrote their name in a puddle with a stalk of golden grass and they need to find water from that exact puddle with the stalk still floating in it and drink it to remember - then that very well might be the truth.)

Bernard Cornwell says he makes his historical dramas with a 'Big Story' in the background, and a 'Small Story', of these particular people in the grip of these larger events, in the foreground.

So the uncertainty and the shifting perspective gives us a particular kind of feeling, perhaps one of indistinct wholeness.

A lot of the people reviewing Lyonesse say find it hard to summarise a mid-level synthesis of what it is. They can talk about the whole thing and say the writing is very good and it made them feel a certain way, they can do a granular analysis and talk about the individual events and trace the lines of the various plots but the mid-theme and mid-range of thought is a bit complex.

Some people say that they find it hard to explain the spell cast by the book, that while reading, and on considering it had aesthetic and emotional power, but when they come to pick up its parts, to describe it in 'plain text', they find it hard to show the thing that moved them.

It might be that the (I actually stopped writing here for a day and now I can't remember my point). It might be that the Escher-hive structure helps to cast this spell. The eyes of the reader, like that of the cast, are deluded by the movement of events up and down the scale in unpredictable ways, reader and character are almost helpless to fully understand and predict what will be, we can only wait and attend, trying to make the best of developing events.

People often say it’s like a Fairy Tale, but there is no Fairy Tale anywhere that is like Lyonesse. It’s a hive of buzzing Fairy Stories, all writhing and bustling through each others paths.