A Review of 'The Shadow People' by Margaret St. Clair

This is a book you might have assumed I would have already read. I think its on the 'Appendix N' and is often given as one of the main inspirations for the Underdark and the Drow. It showed up on my prospective research for Veins of the Earth but I only got round to reading it in the last few days. 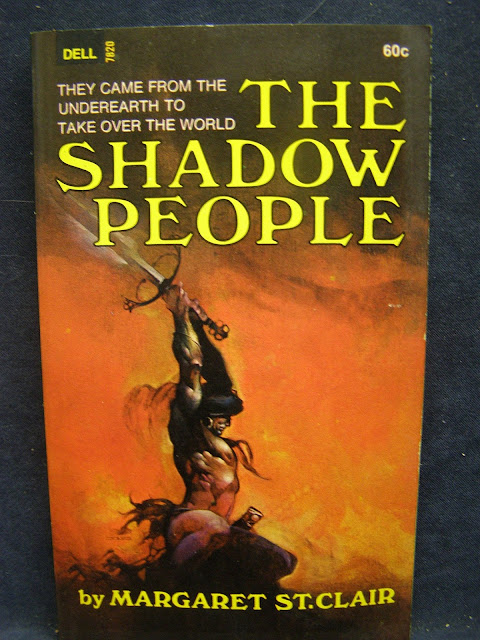 What a remarkable, strange and interesting book this is.

There are two parts, the part that everyone talks about and the strange prophetic tail dragging after it.

The first part is about the Underdark. We open in the San Francisco of the late 60's (think it was written in 69). There are rats in the walls and scratches from behind the bamboo screens. Our hero wakes up to find his girlfriend gone. They argued the previous night, so that makes sense, but her camera, which she adored, is still there, which does not.

The slow decay into strangeness is very neatly done. The hero does and says all the frightened things we would do or say, police, friends, local haunts. The sense of something being deeply and invisibly off slowly rises with his inner tension.

This matching of the overwhelming strangeness of the world with the psychological state of the protagonist, a classic horror technique, so that the victim/heroes mental state mirrors that of the reader and the incursions into the real are impossible to discern from fear and madness in the head, all of this is very well carried off.

This is also where magic makes its first appearance, in an elegant form and style which carries over to the whole of the first half of the book. Someone advises the hero to scry for his girlfriend. The social milieu of the book (which was probably close to the writers own) is such that this is an entirely reasonable suggestion from the kind of people he hangs out with. He makes the rationalist response and they reply that yes, it probably isn't magic, but the meditation and focus allows the mind to process information it might not otherwise be able to arrange.

He tries scrying in a whisky glass and something happens.

Like the blending of decaying mind state and growing alter-verse, the tension between magic as maybe-real and magic as alternative-paradigm also tracks for the first half. The potential reality of magic grows slowly, rarely breaking out into unquestionably open reality.

A key moment comes where a friend tells him where his partner might be. She can't explain directly, but she can show him the way.

She takes him to the basement of his apartment. They wait, and feel with their faces for a cold breeze and a particular scent. Slowly he becomes aware of it. They follow it.

He finds a black gap just behind the buildings pipes, just large enough for someone to slide through side-on.

He enters another basement. Then finds the breeze again. Another strange gap. he keeps going.

And keeps going. Another basement, a forgotten crawl space, an old industrial space, a warehouse. He climbs. More. Another space. All different, never a clear path, only just accessible. He travels for a day.

He crosses the city, passing through junk yards, back lots, empty sheds. It is this long circuitous path that leads him to the Under-World.

He finds a sword. One of the more interesting swords in fiction. It’s simply been left hanging on a wall in an antechamber to the Underworld and it’s is safe because the people of that world hate Steel. They cannot touch it.

Ultimately, he crosses a water barrier and enters a realm adjacent to myth but always carrying the tantalising strands of possibility.

The logic for the Under-People is similar to that used in 'The Descent' - a pre ice-age hominid divide with one group going underground and staying there, effectively becoming a sub-species, one so sensitive, silent and secret that they border on the supernatural.

We discover stuff about the Under-People. They live on trash and this barley infected with this strange fungus. The fungus is a hallucinogen, so everyone underground is on a constant, eternal drugs loop where they are imagining themselves to be animals (usually), then coming down and feeling utter despair.

At one point the hero remarks that he understands now why the Under-people arch their eyebrows like they do, it’s because they are supporting the weight of imaginary horns.

Dream fades into reality into dream, he fights and kills and decides whilst imagining he is a thousand different animals.

I don't want to spoil the details. Suffice to say that he finds the girl, gets her out but ends up having to spend much longer underground than he expected.

And that is the part of the book you were probably expecting, the part that Gygax was probably drawing from and the part most people are interested in.

In the second part it gets really weird.

Ok, so its three years later and the guy gets back to San Francisco. Except the culture represented feels like a Dark Future Sci Fi story written in 2017.

In the three years he's been gone the culture has become so violent that people are forced to wear ID discs to walk the streets. Robot cops stop you to check your disc. One tries to do this to him (he looks like an insane homeless person and has walked through his shoes) and he wrecks it with the Sword.

Luckily (this is a world with only about five or six people in it and they just re-encounter each other), he runs into the woman who advised him about the underworld previously. She's working for the government bureaucracy and offers to help him with a fake identity. Breakdown;

- The fake I.D. has to have a certain level of rule breaking in it or it looks unnatural to the computers that now run everything.

- The hills of San Francisco are gone. Computer-controlled industrial machinery went wild because of a bug and levelled them in a few days. No-one could stop the machines. The people were paid off and the materials went to make new land in the bay. It's generally assumed that it was a land scam of some kind.

- The woman wants him to live with her. They don't get on and conditions are hard but women almost always want men to live with them 'because it’s safer'. Fears of home invasion and street attacks are now utterly common.

- The guy goes to work at his job and usually sees at least one knife attack and at least one fight. It’s just the new background.

- Food shortages are common. A point later in the book is where the main characters manage to come upon a rural market with no food controls and happily load up on fresh food.

- Hardly anyone goes to the University any more, but the University grounds are 'safe ground', if you can touch the gates whoever is chasing you will usually stop. He asks where this custom developed and is told it just grew on its own.

- The boring boyfriend of a character talks constantly of bombs and how he can make them, what he is willing to do. This is played as just some annoying thing he does. Political extremes are considered normal now.

- A couple go dancing, the music is described in a way that it feels almost like a conservative/ironic regurgitation of an old style that no-one really likes but they have to be careful now. Then someone throws a bomb into the crowd. This is normal now. No reason is ever given for the bomb.


So the rest of the book is him trying to get back the girl he originally saved from the Underdark. This involves some detective stuff, some espionage stuff, and at least one full-on shamanic dream session where he witnesses and channels the power of some extra-dimensional entity.

There are people who know about the Underdark and a guy who it seems is trying to set up some kind of global conspiracy to do with the Underdark powers.

These Elves that live underneath the world feeding on trash and their hallucinogenic barley are strangely powerful above ground. Not directly because they fear light, but like an ever-present low-level threat. You can never be safe. Any crawl space could lead right to the dark underneath the world.

They manage to take out the bad guy, kind of, and he frees his girl, kind of, but the knowledge/addiction of the Underworld is still with her, and with him a bit. Even though it’s the most terrible place imaginable it has this dark consuming power. People just don't leave it.

The 'good guys' kind of win but society is so utterly fucked that it doesn't really matter. They are caught in a riot, which might also be a government assassination attempt (no-one knows who is really working for the government or who really has power, there are assumed to be constant shifts between invisible factions) because they wouldn't give the government the secret to the Elves hallucinogenic fungi.

Then eventually their old friend, who went back underground to be a Queen, due to the Underdark-addiction, sends them a powerful magic stone which protects them.

No-one really seems to know what to make of this book. It's not like anything else. I think probably if Margaret St Clair was a man she would be a well know cult author, like maybe Phillip K Dick well known.

If it was just about the origins to the Underdark it would be important. It’s all there, in deep feel at least, the seed of it.

And then there is this whole other half to the book about this doomed future that looks a lot like our present.

And how those two interact and what the whole thing is, well your guess is as good as mine.

Email ThisBlogThis!Share to TwitterShare to FacebookShare to Pinterest
Labels: I read a book, Reviews, Veins, WTF?