"'It is the Burden of the Pellinores,' siad the King proudly. 'Only a Pellinore can catch it - that is, of course, or his next of kin. Train all the Pellinores with that idea in mind. Limited eddication, rather, Fewmets, and all that.'

'I know what fewmets are,' said the boy with interest. 'They are the droppings of the beast pursued. The harbourer keeps them in his horn, to show to his master, and can tell by them whether it is a warrantable beast or otherwise, and what state it is in.'

'Intelligent child,' remarked the King. 'Very. Now I carry fewmets about with me practically all the time."

Adventure is a better word than story. It contains within it a necessary, and rather complex, duality which is easy to understand once experienced but difficult to explain.

(In that sense, the players are often on more of an adventure than the PCs. The PC's have reasonable in-world reasons for what they are doing, they want gold or glory or to defeat the bad king or whatever. The Players want an ad-venture, they want to do something where rich and complex and interesting circumstance and agents oppose them.)

A good adventure usually produces a story, but a story is not the specific aim of an adventure.

Its inherent to the  nature of wanting an adventure that you cannot be absolutely certain how it will turn out, or even what it will mean, and this indeterminate nature is central to the experience, and so the intent, the aim, is not an end but a process.

A story is a product, an adventure is a process.

Everyone involved in an adventure, the players, the DM, the PCs even, and possibly the NPCs, understands that they are involved in something the end of which is not clear and the meaning of which is to be decided. We wish to be in a state of active indeterminacy, a state of awareness and action, rather than reflection, a state in which the shape and meaning of events is being worked towards or struggled for, rather than in a story, which is just the after-action report of an adventure.

I don't like it when (especially OSR) developers start talking about their 'story'. We got rid of it for a while but it has been seeping back in. It sets up a false polarity between the DM and the players and a false moral economy in which you are trading bits and pieces of player activity and player freedom for the 'story'.

('empowered' in these conversations always has a mediocre tinge because it ends up meaning 'empowered like the heroic character in a story', or 'empowered to do something socially responsible')

"..but it might damage the story. How much should I let my players risk the story to have fun? We loved telling stories about the last session, how can I make sure we have another good story to tell after this session?"

Once you accept the tacit terms of this rhetoric player freedom becomes inherently opposed to the intended product of a game - the story, it is understood as an occasionally-useful but fundamentally disruptive force, something that prevents everyone getting what they want and so, even if regarded sympathetically, it will always be regarded in its negative capacity, as something to be managed and its negative aspects reduced while maximising the good.

But, if you assume the intended product of a game is an adventure, (and an adventure fundamentally cannot be a product, really it is a state, a process, a mode of being), but if ad-venture is the intent of the game, then  that absolutely cannot be accomplished without a  high degree of player freedom. Their freedom is like the battery, lightning bolt, the necessary active animating force which turns the till-then, passive and reactive elements of the game into a living thing. Like a person putting on clothes, freedom of action wears the rules and ideas of the game and makes them an adventure. Players must be free to be opposed.

And yes you can say that a story is something you can change in the middle of it. But it still must have a particular end, and it is a quality of a story that everything in it should connect. It is like a snake which we run our hands along from head to tail. The snake may writhe and twitch, change its position, its tail may flick back and forth, and we do not know exactly where its tail may be at the end, but we know that when we have finished, everything will have been connected to everything else in one smooth flow of muscle and motion, and there we are, a good story, in which everything makes coherent sense, everything leads into everything else in a smooth but occasionally unexpected way and where you know which part is the beginning and which the end. A good story but not necessarily a good adventure.

Go to the middle of the snake and break its spine, or to the beginning and step on its head. Now its a bad story, but it could still be a good adventure.

Saying we play for the story is mistaking the signifier for the signified. As is pretty common in human thinking because an abstracted, describable signifier can be easily communicated and traded and worked over, and you can tell what it is and how it works.

An active, lived, process, while you are in the middle of it, animating it, is a different thing, harder to describe, harder to see exactly what it is, harder to communicate or trade except through sharing the experience, and as usual we mistake the re-cognated describable element, the fewmets, for the living process which is the true aim, the questing beast.


And now the news.

I've been trying to put together these meetups where the low-level UK OSR creators and publishers can get together with the aim of combining forces for Cons, Media, Distribution and whatever else. Yesterday was my first attempt at that.

We were aiming for this; 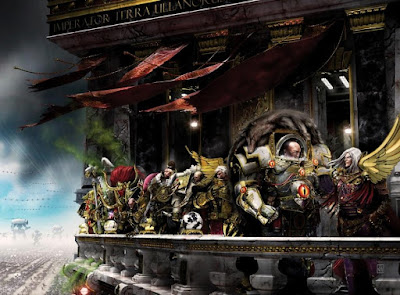 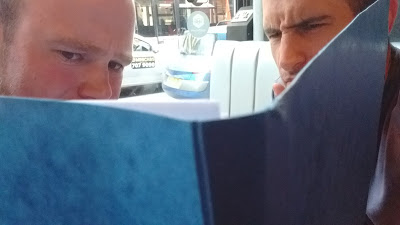 Because only Chris and I turned up.

We are literally pretending to be reading in this image.

I am now God-Emperor 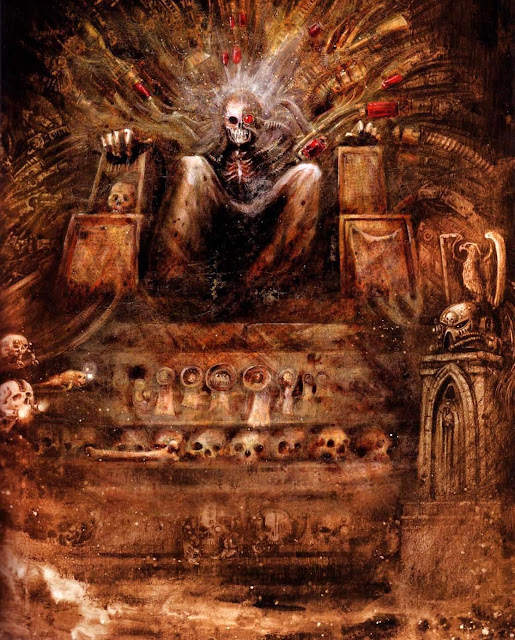 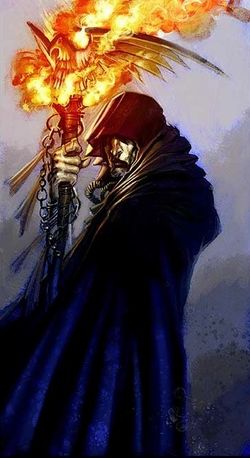 And believe me we talked a loooooot of shit about ALL of you.


I am going to try the whole thing again. This time a general OSR meetup, in which I hope to talk to as many publisher and creators as possible, at the second half of October, somewhere in or near London so that southerners can attend.

SECOND HALF OF OCTOBER


Right now we are looking at nailing down an exact date when the most people will be available and getting somewhere to meet.

I am not opposed to hiring somewhere if enough people are going to turn up.

If anyone has any good ideas about where to meet in london then you can leave them here in the comments, in the G+ thread for this post or in the UK OSR CREATORS COMMUNITY.
Posted by pjamesstuart at 02:52

Email ThisBlogThis!Share to TwitterShare to FacebookShare to Pinterest
Labels: a bit heavy for most people, Absolute Clusterfuck