(This is longer and more annoying than the standard D&D falling damage chart, and harder to use. But it is a better, more consequential, and less predictable system which makes falling both more dangerous for high level character and also possibly-survivable for low level ones.)

Anyone can climb like a thief if they have time to study the route.

They must be able to see the whole route they will climb. If they cannot see it all, or if the nature of the route changes unexpectedly, or if they can only see one part of it and enter an unseen section, they must pause and roll again.

They must not be encumbered.

These cumulative totals will be written on the character sheet down the top left, replacing, or maybe adding to, the climbing saves on there. So everyone knows how well they can climb at a glance, and how long it will take them. 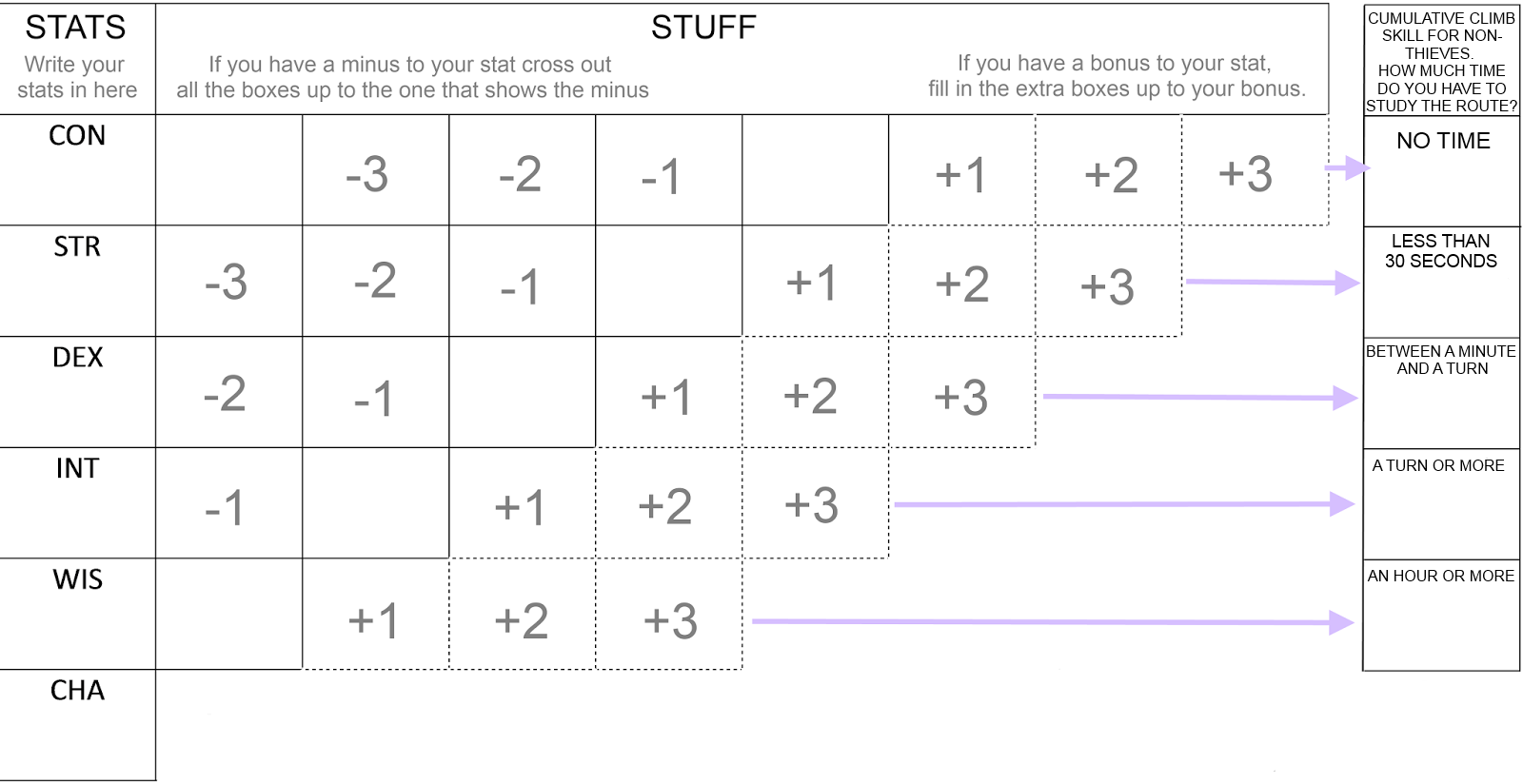 Thieves and equivalents, can just climb with their thief-roll, no study required at any time.

When Do You Roll?

Overhangs, horizontals and superhuman climbs should always be rolled for.

The best climber can roll themselves to go ahead and rig a route so no-one else has to roll.

If combat breaks out, the environment changes or time becomes a factor, you might ask for rolls.

What do You roll.

The roll is a straight d100, trying to get under the target number, if they fail, any falling damage will be counted from the mid-point of the climb.

Under certain circumstances the DM can ask for an easy or difficult roll.

How Do We Know How Hard Climbs Are?

This diagram shows the various difficulties of climbing. Each level of difficulty has an attached failure chart to see what happens if the PC fails a roll. 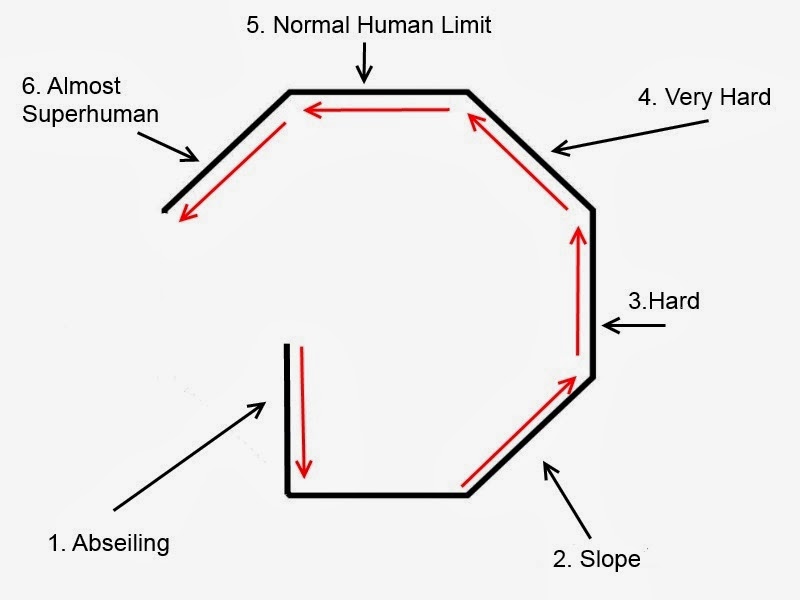 There are six levels of difficulty. The simplest way to think about which table to roll on is to ask what incline the PC is climbing at. Imagine a tiny person climbing round the inside of the diagram. Are they abseiling down the first vertical, climbing at 45 degrees, climbing a vertical wall, climbing an overhang, upside-down on a ceiling or trying a reverse-overhang from above?

The tables also count for general levels of difficulty. The DM may wish to move the level of difficulty up or down depending on the circumstances and the nature of the surface.

1. Abseiling. Moving down a vertical pitch with assistance and ropes.

2. Slope. Moving up or down a slope somewhere between 45 and 90 degrees, up a very easy broken climb with ledges, or up a lesser slope under very difficult conditions (Ice, Water, Combat.)

3. Hard. This is the standard 90 degree thief-only climb up dungeon walls or rock. No-one encumbered can try this.

4. Very hard. This is for overhangs and very difficult walls. For expert climbers or desperate people.

5. Human Limit. Hanging upside down, transiting the roof of a cavern. This is Olympic or exceptional climbing, at the limit of real-world ability. No one who is not a thief can even attempt this. No matter how long they think about it.

6. Superhuman. A reverse-overhang or other exceptionally difficult piece of work. Probably impossible for a normal human. A D&D thief might make it.

A simple climb roll is made for each with no modifiers. If the roll is failed, each type of climb has its own failure chart.

Each is a single roll-under d20 roll which is checked against each stat in sequence. Failing the CON roll means all other fails are cumulative. If the CON roll is passed, only the first failure counts, the rest are ignored.

When you fall and are stopped by a static rope, you still take damage for the length you fell. So if you fail on DEX only, you take d6 damage. If you also fail on CON, INT and WIS, you fall 20 feet and take d6 * d6 damage.

In Veins, normal adventurers don’t have access to dynamic rope that will absorb falling damage rather than transmit it. They can get access to it underground though.

A climber under stress will sometimes feel their thigh muscle quivering and feel as if it is about to give out. They often freeze. This is called ‘Disco Leg’ or ‘Washing Machine Leg’.

If you fail on CON, INT and WIS, you are trapped.

Again, incompatible results mean a fall. So any combination of STR, DEX, INT and WIS results in a fall.

A ‘dyno’ is a dynamic leap, fully out of contact with the rock, to a better position. This is always a hard climbing roll. Failure is a fall.

(At the DMs discretion, succeeding with a dyno in front of observing NPC’s may give a PC +1 Cha with those individuals. It looks cool as fuck.)