Been a while since I did some of these.
Marsh Cry Mantis
Forced to a diet of elves it generates, locust-like, remarkable original symphonies of startling beauty from its leg-bows. A walking concerto. Music is so beautiful that you have to fail a wisdom test each round in order to hit it.
Pulse Giant
A network of arteries and veins moving in the form of a man, as if a giant had been flayed of all flesh leaving only the tracery of blood. Move and stills as its great heart beats. Still for one round and them moves in another. Attack it and the living blood creeps around you like tentacles and the blue veins try to gouge out your eyes and pull off your limbs. But only one each round. Arteries grasp one round, veins kill the next. Grasp and damage. On and off, on and off.
Barb Ape
An gang of Mandrills that follow you and rips the shit out of you from a distance. They will track you in the wilderness and observe you. Wis test to detect. The next time you see them they will act out in mime your latest mistake you made and make you look like a proper tit. Then they throw their shit at you. They will do this until you lose it and go after them. In which case you will be walking into a trap. They dig pits, bend branches, collect snakes, whatever seems appropriate.
Child Fly

Fat black flies with the heads of blind weeping children. Beg for you to kill them as they go after your soft tissues. In a little high-pitched fly voice, like a soft whine on the edge of your perception going 'kiiiiiillll meeeeee pleeeeease'
Posted by pjamesstuart at 12:49 No comments:

Email ThisBlogThis!Share to TwitterShare to FacebookShare to Pinterest
Labels: Monsters, The Forge

'But why Bird Masks?' I hear you inevitibly cry. 'Don't Kenku already exist in D&D? Aren't the bird-demon-people-things cooler anyway? Is a man wearing a Beholder Mask better than an actual Beholder? What about the material nature of things? What about their physical presence in the imaginative space? Is this really the time or place to be playing silly conceptual games?'
Of course I understand your worries. Allow me to make three simple arguments in explanation.
Argument One
If you follow Kenku long enough, you're going to see them take a shit.
Then you will see them clean up. Eventually no matter how strange the Demon bird-men were to begin with, the irrepressible force of Gygaxian naturalism will consume them and render them quotidian.
Men who happen to be Birds, no matter how strange they begin, must eventually develop a naturalism of their own.
But  human beings are already known. There is no challenge to the discovery of the bare facts. The strange internal spaces of mankind however, are still beyond our reach. The darker, invisible reaches of the human soul are as distant to us now as they were a millennia ago. As far as the deeps of the sea or the cold reaches of space.
The deeps of mankind cannot be reached because they are a shadowed space, formed in the hinterland of our reasoning selves and expanding as fast as our power to comprehend them.
Men who happen to be birds can be, and must be explained. People who obsessively wear Bird masks cannot. The reasons for the mask can change as rapidly as our questions, always remaining a short distance out of reach.
Argument Two
This Video.
Argument Three
Lines from 'A Canticle to the Waterbirds'
By Brother Antonius.
'For you hold the heart of his mighty fastness
And shape the life of his indeterminate realms.
And well may you sing his praises, birds, for your ways
Are verved with the secret skills of his inclinations,
And your habits plaited and rare with the subdue elaboration
of his intricate craft
Your days intent with the distinct astuteness needful for his
outworking
And your nights Alive with the dense repose of his infinite sleep
You are his secretive charges and you serve his secretive ends.
In His clouded mist-conditioned stations, in his murk,
Obscured in your matted nesting, immured in his limitless ranges.
He makes you penetrate through the dark interstatial joinings
of his thicketed kingdoms
And keep your concourse in the deeps of his shadowed world.'
I think that explains things fully.
Posted by pjamesstuart at 14:25 No comments:

Email ThisBlogThis!Share to TwitterShare to FacebookShare to Pinterest
Labels: And keep your concourse in the deeps of his shadowed world

All of there are made of varous things stolen from other people. Pictures by Zak S, Stats by James Raggi and mutations by the Scrap Princess. I'm assuming if it's on someones blog or if its part of the OGL then people won't mind me posting it here. if anyone involved wants me to take anyhting down, I will. 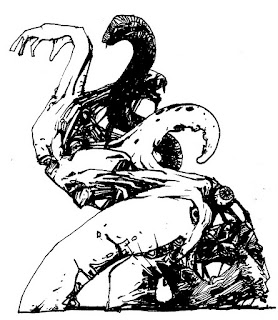 
The thing with people who were born on the coast is, you never know exactly what’s gotten into the family tree. You will live a long time. You dream of alien landscapes and underground cities. When you wake up, sometimes you can do things you couldn't do before. One day you will visit those cities.


Sometimes you can sense things other people can't, you are less surprised than other races, 1 in 6 Chance. Plus, you have the Search Skill.


You are Slowly Changing. Every second level, roll on the chart below.

Changes stolen from here.
This was orininally inspired ny the Deep One mutations in 'Realm of Crawling Chaos' but the mutation table in that is probably copyright and I don't want to steal from anyone.
I stole from Scrap Princess because she made the best mutaion table I've seen.
As usual, if anyone involved wants me to take anyhtin down, I will.
Posted by pjamesstuart at 13:49 No comments:

I can't even remember the name of the OSR blog I stole the idea of War Chimps from. But I nicked them from somewhere. The Stats are from Raggi
War Chimp 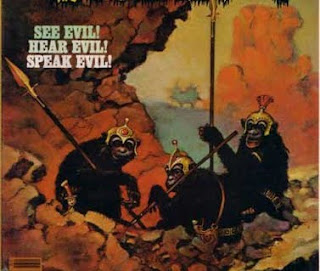 
No-0ne knows where they came from, no-one cares. All that matters is that they are tough, reliable and cheap. War Chimps are the main mercenary class in the area. They provide a core of guards and soldiery. Chimp veterans can have trouble with Drugs, Alchohol and PTSD. They always need money, are up for adventure and bond fast with groups.


It takes 5 additional items for you to be encumbered.


Of course, in real life chimps would NOT be good at carrying things long distances. Their build is all wrong, but to hell with that.

Posted by pjamesstuart at 13:40 No comments: