Did I invent this?

I might be wrong but I think I may be the first person to do this. i know there are dungeon poymorphs and dungeon dice, but a D20 that is a dungeon?
Anyway.
I love the idea of the Underdark and I love the idea of dungeons in 3d. I also really like the idea of a place where the dimensions curl back on themselves out of sight. But how can you make that without some weird expensive software that only the DM can use? 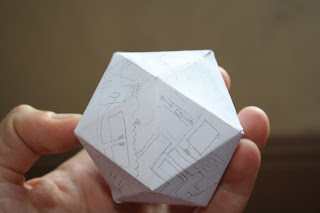 Go here and download a model of your favourite Polyhedra*. 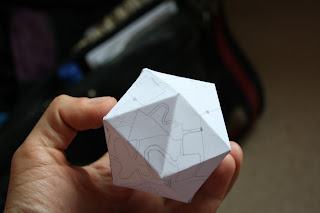 Draw a dungeon on it. Make sure to connect up all the bits. 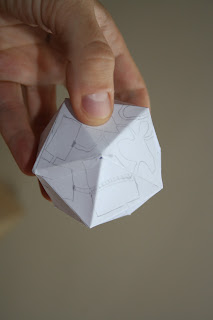 Even if you just use a pyramid shape, you have just created a space-bending dungeon that cannot be mapped in two dimensions.
If you want to keep it simple then make it top down only. I included top down, cross-cut and isometric figures in mine.
So now you can create a 3d dungeon for pennies. 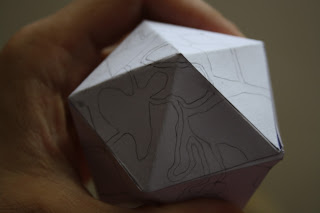 I think I made mine a bit too complex, how the hell am I going to fill it?
Anyway, thanks Jeff Vandermeer, if I ever get to put players in this thing, this is where the Grey Caps will go
(*And I know you have a favourite)
Posted by pjamesstuart at 12:50 2 comments:

I have a small palm-sized brown notebook. When I was bored at work I would take it out and try to make a monster for LOTFP.
Because the pages were so small I could only fit in a few sentences of description. This was a good thing. You have to understand what the thing is and work out what it does from a few lines. That means if they turn up in a game it all gets created very quickly in your head. That means less time for your conscious mind to dick around worrying about a Necromancers exact methods or the fucking Shadowfell or whatever.
It was those guys in Jason and the Argonauts, done by Ray Harryhausen.
They really seemed to enjoy being skeletons, and they were clearly pricks. So it makes sense that the people who end up becoming Skeletons are exactly the kind of shitbag that would actually enjoy it.
You knew these people at school, never saw them since. Eventually they have to get old and die, right? Did you think they wouldn't jump at the chance to mess you around again?
Why do they have Roses in their eyes? I don't know,  assumed I would find out during play.
Skeleton Bastards
XP - 25
AC - 12
Hit Dice - 1
Move - Human
Attacks - 1
Damage – d6

Morale - 7
Roses are their eyes, and leafy vines throng in their ribs.
The petty, vindictive minds of small-souled killers squat in these innocent bone like toads. They will miss no chance to do harm of any kind, no matter how small. They fear above all things, an innocent soul, which to them, burns like a pillar of flame. This they will flee, or try to kill from a distance.
Skeleton Parry!
Miss in melee with an edged weapon? Then pass a strength test or your blade is snatched out of your hand, caught in its ribcage or arm!
Zombies look sad. It doesn't scare you in the short term because you have other things to worry about, but over the days and weeks and months, the most powerful emotion has to be sadness, and despair.
It's worse when their wearing clothes becasue you know they're people.

The Sorrowful Dead
XP - 25
AC - 9
Hit Dice - 2
Move - 1/2 Human
Attacks - 1
Damage – 1d4
Morale - na
Those who die can be prevented from passing on. They do not fully understand what they are. Weeping and speechless they wander the paths of a forgotten memory. Life wounds them. To the dead, a bed of flowers is like a cacophony of bells and a living man is an orchestra in a rage of sound. Slowly, weeping and silently crying, they will try to squeeze life from out of the world.
Posted by pjamesstuart at 06:30 No comments:

The Demon Behind Glass

This is based on my experiences with the National Health Service. Statted for LOTFP .
Posted by pjamesstuart at 06:19 No comments:

The Character of Time

I bought and played fourth edition because I had money and that's what they had. I had never played D&D before and had no-one to teach me so I had to learn from the 4th Ed Players Handbook.

This is a bit like learning to play the Guitar by reading a biography of Eric Clapton. A bad biography.


Actually I don't think the people who made 4th Ed actually really want anyone playing their game. Not deep down within themselves, or in the forgotten spaces of their thought. They believe they do but I felt the whiff of a kind of strange mind-scattered corporate double-think I have smelled many times before. I'd write about it but that wouldn't be useful and this blog is meant to be useful things.

So I went from there to Lamentations Of The Flame Princess which is about as far from 4th Ed as you can get. James Raggi had a lot of things to say in his game. I'll speak about one of them. Recorded Time.


You count the minutes in the dungeon so you know when the light runs out, and if the torch is black and dead then the players cannot see. And that's that. They are lost. In 4th Ed an adventuring kit packed with glow rods and lamp oil is bought for you and that game specifically says that most underground spaces are kept well lit by the inhabitants, or convenient phosphorescent fungi.


So we go from a dungeon lit like American Television to one with a hungry darkness. And from dramatic time to a cold measurement.


Like a lot of Raggi's advice I was both attracted to and repelled by this. His slightly aggressive puritanism is like a sharp block in the road of fun. It challenges but the challenge suggests a promise, that the road is deeper and longer if you get past.


Or maybe that's bullshit and there is no road.


I wanted to keep time in the dungeon but that is boring so I renamed the Hours.


In Balach the Hours live. Each individual segment of the day has a quiet thought, a mind and a relationship with the other Hours. As each hour passes, somewhere in Balach, they duel in physical form. One hour will die and pass on, the other will live for sixty minutes and rule in the spaces between moments. Always the same way.


Unless you meet them by chance. And change the result.


If you can befriend an Hour, you can also become the enemy of one. So time can have both personality and politics.

The Hours have names, eventually I plan to give them Stats.

Encounters in the Corridor

There is a strand of Afghanistan shaped as a buffer between two competing empires. A long finger of road reaching out in the mountainous region between Tajikistan and Pakistan.
It used to hold the only direct road from Afghanistan to China, but the border has been closed for some time and now the abandoned road leads nowhere.

I saw this on a map and was enraptured by the thin, strange tentacle of land. I decided to set my games there, or at least, in it's geography if not in our reality.

I threw in lots of ideas from other people. I have linked where is seemed appropriate.

I still don't know what a Daemon of mathematics is or why they are hunted but I do know you catch one on a mobius strip of paper that hangs from a spiderthread inside an empty jar.

Random Encounters in the Wakhan Corridor

Posted by pjamesstuart at 05:46 No comments:

My goodreads page (which I didn't know I had.)

Fire on the Velvet Horizon

BASIC RED
Not like any monster manual I'd ever read, I was certain, but still of its genus species. That was my expectation. My expectation can fuck off I guess because Fire on the Velvet Horizon is better than me.


Save vs Total Party Kill
Fire on the Velvet Horizon is a monster book, but that description seems reductive. Scrap Princess and Patrick Stuart have produced something very avante garde and truly unique.

Hack & Slash
I read a lot of fiction, and the creativity here is on par with some of the masters. Gene Wolfe displays this kind of creativity in his novels. Borges describes the type of hells these creatures inhabit in passing. McCarthy has the type of poetic turn that takes your mind from where it is and puts it somewhere you are not. This is what the book does.

James Raggi
Patrick Stuart & Scrap Princess' Fire on the Velvet Horizon and Rafael Chandler & Gennifer Bone's Lusus Naturae have redefined the monster bestiary for role-playing games and have basically made every single other such book boring, backwards, and useless.

MAPS
If you prefer top-down maps, Gus L has created some for this adventure for free. go here to access them.
REVIEWS

Bryce Lynch at Ten Foot Pole gave it e very nice review.
GREAT adventure. More than enough content, and the content is VERY easy to build off of.

Robin Zink at RENFIELDS CAT has actually run it.
"I love this thing. It has introduced myself and a rotating circle of about ten friends to Old School role-playing and we are having the best fucking time."

Robin also did a whole series of posts about running it and even created an index.
Basicred RPG
"The phrase "There's a flood and your PCs are compelled to investigate!" is not in the module because it got in the way of poison and rules for the stairs, and because doing awesome things is taken as granted in your players."
Bonigen.org
"Like many contemporary adventures it’s shock full of desperation and sadness and malice. What makes it stand out, however, is the human scope."
Dungeon of Signs
"UltimatelyDeep Carbon Observatory is a thought provoking and wonderfuladventure, almost novelistic in its scope and strangeness." ..."Despite my affection for the creator of Deep Carbon Observatoryit has troubles. "
Save vs Totalpartykill
"Scrap Princess’ illustrations contribute to the overall tone of the book. I find her work is so frenzied and terrifying. Maybe that’s not the right word, but there is something about how she draws that I find really visceral. I don’t know anyone else that draws like her."
Hack and Slash
The nearest I can figure is avant garde is code for everything in this module is interesting and novel.
Cauldrons and Clerics
Seriously, my points here are - it gives you pretty much everything you need for 4-8 sessions of gaming, depending on your style (my style of games would probably end up at the higher end of that amount) - which for $10 is a steal. (In the same review Luka also goes into some of the negatives.)
Nerdwerds
This adventure deserves to be spoken about in hushed tones and discrete symbols.
Violent Media
Go buy this fucking thing… It’s incredibly good and very, very interesting.

This isn't a review but you might find it interesting

Swords and Stitchery
DCO is at once disturbing and weird, because as I'm reading the pdf the sky is dripping down with rain and history. You see in 1955 my home state of  Connecticut suffered one of its worst disasters so far the flood of  Nineteen Fifty Five!
Beyond this link are the ruins of the original post: