A Review of Jamaica Inn by Daphne DuMaurier

Hey people are still putting in Dungeon Poems and I am still racking them up here. Take a look at the results and see if there is anything you like.
Is one or more of hem secretly Kent? They fucking might be....
Now, a book review;
A wonder, I read some fiction that actually enlivened me. Actually I just listened to it on Audible; Daphne DuMauriers Jamaica Inn. I knew almost nothing about DuMaurier previously apart from the Rachel Weisz film 'My Cousin Rachel', which I enjoyed.


Short Version; salt of the earth heroine loses the farm and moves into the titular Jamaica Inn with her Aunt. Enters battle of wills with her Aunts abusive husband to free her from his clutches, and an actual battle with the smuggling ring the husband runs.
Longer Version; Gender! Relationships! AAAAAAGHHHHHHHHHHH!!!!!!!!!!

Our heroine, Mary Yellan is basically a teenage enbys mary sue and its fucking great.
Highly-intelligent, extremely rugged, capable, brave and tough, strong-featured but with a flash of fire so that every male character with an above average IQ either desires her or respects her as a worthy rival. Mary is a simple woman of the soil who grew up with her mum on the farm, (with a suspiciously verbose and analytical intelligence for a woman who spent her whole life in one village).
Mother worked super-hard every day to keep the place going after father died. Then mother takes ill, as Mary watches over her during the illness the farm goes. After her death Mary writes a letter to her aunt and receives a SINISTER RESPONSE which because this is a gothic text she immediately obeys. She arrives at Jamaica Inn and after discovering her Aunt is a wreck and her Uncle is a brute,  sets herself to saving her aunt from his clutches and possibly foiling whatever other schemes he may have. 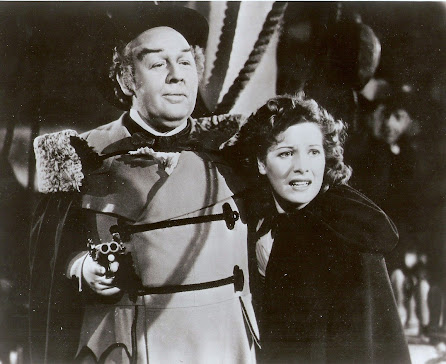 Here are Charles Laughton and Maureen O'Hara from Hitchcocks 1939 version
This really has nothing to do with the book
So far as I can see they jammed a bunch of male characters together in a way that
totally fucks up the way the book works.
HOWEVER
Look at the SQUIRE ENERGY Charles Laughton is pumping out there.
That is some top-level historical Squireing, not easy to do you know.
Lets have another just for fun. 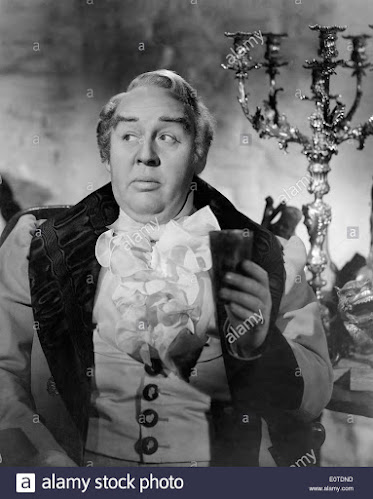 Ahhhh the core of this character is fucking terrifying in the book....

THE DUAL-VIEW OF THE HERO AND CREATOR

While the heroine crackles with the immediate energy of feminine courage, pulses with the peasant virtues and sees things almost (almost) absolutely as a 'citizen', a core member of society carrying its core beliefs like a banner in her heart, the creator is a murky bitch.
This is someone telling a heroic story in a non-heroic world, with a hero increasingly aware of her own weakness and culpability. The two merge somewhat in the final scene, the creator and created becoming one.
But everyone in a dream is you, and if this is true of Jamaica Inn then of what is DuMauriers soul composed?
- Tough, smart, compassionate, brave and honourable country girl.
- A brutal, charismatic, sympathetic Ogre, a victim and a victimiser of all things, (also an alcoholic).
- A terrified rabbity soul-broken woman bound to her tormenter.
- A cheeky roguish scoundrel with a heart of gold who lives outside the rules (and who MIGHT turn evil).
- A dark- nietzschean self-declared abomination, proto super-villain.
- a dumb, domineering sometimes-likeable decent squire.

The evil(ish) uncle. A really beautiful 'heroic' horror of a kind encountered in the better sort of crime drama. A monster, an ogre, carrying around the wisps of his youthful charisma and beauty. Huge, hairy, physically overpowering anyone around him, inspiring direct and immediate terror in most people. Intelligent, born poor to a criminal family, crafty, perceptive, dominating his flock of goblins with threat, rough charm and sheer presence, though its suggested he hates them, hates working with them, hates charming them and hates his life.
Dominates and destroys his wife, and hates her for being broken. Driven by the regular systematic collapses of his life due to an almost schizophrenic level of alcoholism. Knowing full well that he will collapse into week-long binges, knowing his wife will lock him away as he comes down and during his most dangerous periods. Even castigating her - "why didn't you lock me away, why did you let me out?". At moments even totally dependant on the woman he terrorises and bullies to sustain him, and her happy to do so, even enjoying it. A really amazing and intense ruthlessly and horrifically co-dependant arrangement.

Jamaica Inn is empty of everything but tension and fear except for Saturday, when the Cornish Temptation of St Anthony appears. Its a criminal crew of the kind you used to get! Filthy peddlers, suspicious gypsies, simple sam who picks endlessly at his hideous birthmark. The flotsam and ruins of early 19th century Cornwall. Think this was written in the 30s so one of the last times you could get away with such a cast of extremely problematic grotesqueries so I suggest you enjoy them while you have them. Get ready for the 2031 Jamaica Inn adaption told from the perspective of the bar flotsam where someone turns to camera and says but isn't the real smuggling CAPITALISM??? 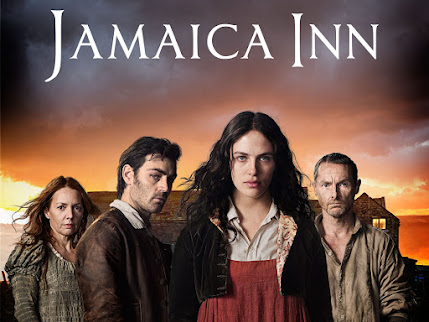 Ok looks like the BBC did a version.
God this looks dull.
They got the right look for Mary Yellan though.

Eeey we got a Silent Titans reference. Thanks Daphne.
This is a beautiful, hallucinatory moment of horror. Tts a dual-scene really, two making one, both beautifully accomplished.
One is the strange, awkward, incantory confession scene were Joss Merlyn - in one of his altered states, at war with his own horrors, pulls Mary to the ground and whispers the truth of his actual secret; "Don't you know what _wreckers_ are?". He leads the pack of rogues from Jamaica Inn, luring ships to their death at night then murdering any who escape the ship, clubbing them, cutting them down, strangling them on the storm-lashed sand, and making off with the wrecked goods.
From that point on we get the clear sense that Mary is screwed. Can you kind of tell how morally fucked a protagonist is by the severity of the crime they are dealing with? From the supremely-innocent jewel-theft to the mildly-dangerous casino heist, through murders and and all the way to sex crimes? Maybe not, Rififi is largely motivated by jewel theft I think and that is a moral vortex. Anyway.
Then in the second part of the book Mary is semi-abducted and drawn into an actual scene of wrecking, this one even more nightmarish as Joss Merlyn is entering his final decay, spiralling, and has summoned his army of Dickensian horrors out, more drunk and less organised than usual. They wait naked on the shore (better to escape the freezing sea-clad clothes), and by chance, summon a ship, then break into a frenzy of uncontrolled theft and murder. The crime itself collapsing into desperate violent anarchy. They turn against each other, throats are cut, brains blow out, the goblins scatter to the black moors. Its fucking great.

DuMaurier really does have a beautiful grasp of moment, from the very small simple things like rain moving against the glass of a carriage window, to the slow shadowy logistics of movement in an empty hall, the closed quiet of a vicars chamber.

THE MECHANICS OF THE CRIME

The Christopher Nolan stuff. This is all well accomplished. The details fade into the background as the story goes on, or as the procedural story of the wreckers conspiracy and its unravelling and collapse slowly breaks apart from the story we follow, the divide in Mary Yellans soul, and the war both between the genders and inside her.
Forget 'Vampire Lover OR Cardigan Architect'. We are in high literary mode here! Instead we get Sexy-Dangerous-Horse Thief OR Gothic Supervillain OR Farm. The fact that 'farm' is even in there as an option is probably what makes this at least tacitly a feminist novel.

Grim quasi-feminism of the kind I prefer. Du Maurier reminds me a lot of Rebecca West and Alice Sheldon/James Tiptree, who were both I think technical feminists, but with a much darker view of the female soul and of the relationship between the genders, than you would be able to sustain as a 'normal feminist'
Mary Yellan is almost the morally optimal individual, but still physically overpowered, consumed with feelings of own weakness, of the desires of women, their attraction to danger and power, how easily they are broken and maybe how they even want this to happen.
Hey it DuMauriers book not mine. I wouldn't have the balls to write women this darkly.
The book starts with Mary trying to 'save' her aunt and slowly becomes about her fighting not to become her aunt. It becomes more obvious (to the reader and possibly to other characters, if not to Mary) that probably her aunt is not going to be saved, other than by killing or imprisoning Joss Merlyn, and that even then it might not be enough.
There is a horrific cyclic pattern in the Merlyn family. In the opening part of the book Marys Mother associates this with 'bad blood'. There's never any family of bad blood that ever went full right. They might turn for a generation but they always go back in the end.
It’s not clear if the book believes this or not.
The Merlyns mother madly defended their father even though he treated her terribly, and ultimately abandoned her. One of the sons dies, another is Joss Merlyns, who seems to be repeating the same pattern. Their relationship began with giddy infatuation and joy, and the last Mary saw or heard of her lace-bestrewn, very femme aunt was perhaps ten years ago. Now the aunt is terrified of but also bonded to, and adoring of, Joss, and he seems to despise her simply because he was able to break her.
Mary herself enters into exactly the same kind of relationship with Jem Merlyn, the heart-of-gold horse thief who is as hot and charismatic now as Joss may have been ten years ago. He's a good guy who lives on the edge, *right now*. Now he seems good, or more good than bad, but he clearly has the capacity for bad in him. And Mary is desperately overwhelmingly attracted to him, while having a full and total awareness of how potentially dangerous this is and how she may well be repeating exactly the same pattern. In fact she hates and despises her own love for Jem, while still not being able to let it go. This, the book seems to say, and the main character definitely says, is the horror of womanhood, the need, hunger for attachment so strong it cannot be overcome
At the end of the book Mary has to make a choice between Horse-Thief or Farm. (The Supervillain has been defeated, if not by Mary, that at least partly by his desire for Mary). Two overwhelming desires  inside her, and she can't have both (it’s still a gothic novel, people are not going to do practical time-shared). The last scene is technically-romantic. You could shoot it like an 'off into the sunset' ending, and I wonder if people have done that. But if you follow the moral architecture of the book its potentially-horrific.
EDIT - THERE'S A 1983 VERSION WITH PATRICK MCGOOHAN