This is my second attempt to create a systemtisable way to build a geography of interrelated gods and spirits attached to a local environment for Soft D&D.

This one will be less popular as I couldn't quickly find a landscape artist of the same caliber I STOLE from for the previous posts.

And by 'create', I mean adapt and steal from the design concept of Echelon Explorations who came up with the Polyhedral Pantheon matrix concept and produced the PDF guide to it here.


The basic idea is that you create the matrix of interconnections first, then fill that in with individual elements based on the background of whatever you are trying to model.

The original Echelon Explorations version is much more complex and involved. I don't want to rip them off too much and also I prefer something a bit simpler. 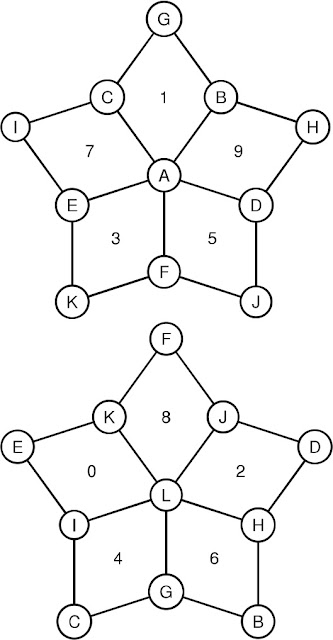 The sides will be elements of the environment, and points will be spirits.

You can use any die I think, with the amount of stuff generated rising with the size of the die.


2. Think of an Environment

I'm going to use my memories of Cumbria from my previous post;

"its a flat,narrow fertile plain,
on one side are the fells, the mountains of Cumbria
steep, grey ,scree-sided, covered with heather and sheep
with tarns and narrow tracks and slices of mountain and black lakes hidden
on the other side is the irish sea- shifting in colours like the sky
rippling with like like jewels in summer
black and heavy as wet slate in winter
where storms come from
in that part of Cumbria - all the trees lean to one side, like letter Z s
the wind has blown them all since they started to grow and now they grow in the direction of the wind from the sea even when that wind is not there"

3. Break down elements or aspects.

One for each side of the Die

*The rest are strongly bound to geography while this is different, it seems to work though. 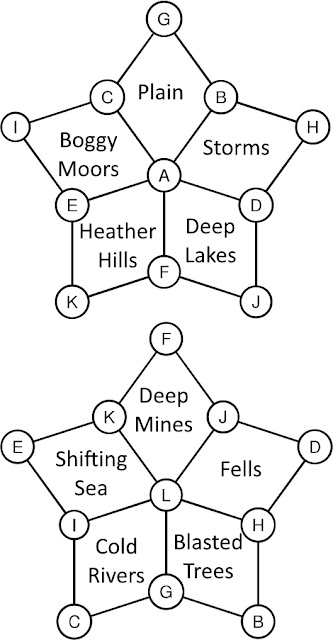 4. For each Point, note the sides which touch

5. Work out your Spirits

A - this would have to be a village or town, on a hill by a lake, with a fertile plain to one side and dense moorland to another, lashed by storms. Maybe this is where the PCs start out and this place has a powerful, but silent spirit, female, ancient, quiescent, maybe something roman.

(filled in later - the Queen of Iron Jack, Lady Penne, Mad Rackham the Raftershaker, Great Waiting One and Millerwife)

B - a forest of wind lashed trees on the plain, a cold mine within. maybe a spirit of the earth or of the forest, a root spirit perhaps, tasting of the iron in the earth, one recognised by the miners.

C - The river, running through plains and moorland. a civilised reasonable slow spirit of the wandering river.

D - This seems like a black turbulent spirit of high storms, steep hills and a dark lake, old, male a moody.

E - a moor and sheep-strewn hill-land overlooking the sea, this feels like another spirIt of an ancient culture rather than a primordial nature being. something stone and bearded, waiting under the heather
sleeping, a giant perhaps.

F - Another mine, this one seems calmer, in the heather hills by the lake. I'll say this one actually likes the sheep tickling them, and keeps watch over them.

G - The river, the plain and wind-blasted trees. This seems like another very civil place. A village spirit I think, or one accustomed to humanity.

H - A steep sided fell lashed by wind from the sea, a salty spirit, grim, probably one that maybe feeds off ships or resents them passing its coast.

I -Somewhere the river passes through moorland and meets the sea,a sandy  estuary spirit then, presumably one that rushes in fast with the tide, maybe drowns people, likes to hold on to things that pass through.

J - A mine in the steep fells above a lake, some utterly dark, cold and seeping spirit that fills the mine
very alien, turning in its sleep at the bottom of the lake, the miners all know well to make many signs and to do their work quickly and quietly so as not to awaken or anger it.

K - This must be a brother to MILLERWIFE. A coastal mine, one that reaches out under the sea
full of noises, a tapping that sends people mad,and of dripping.

L - sea, mine, fells, trees, river. This must be another powerful and capacious near-ancient god,
another town or a port perhaps.

Perhaps this is the governing spirit of Old Gos, Sir Coombe, Esk, Knockerman and Calder.

So now the diagram of relationships looks like this, with Noctorum at A and Ravenglass at L. 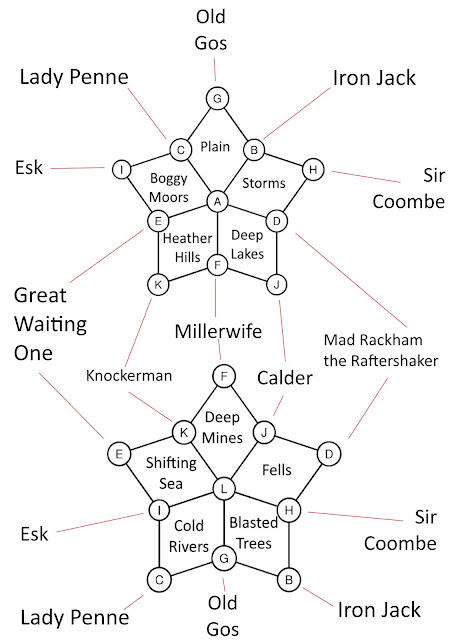 And thats that really...

Is this really better than someone with imagination just drawing a map?

Not really, but I can't draw so I fall back on these graphical info-design elements.

All it really is is an interconnected relationship/hierarchy map. BUT, the simplicity and availability of the system ideally makes it something that is easy to systematise between different cultures, backgrounds and imaginations.

Its something you could fill-in with children, and it gives a range of personalities and implied relationships that mean there are knock-on effects from dealing with spirits.