A Horde of Ice a Throne of Gold

This is cribbed from a email to a friend about a poential game of Diaspora that never quite went down. Put here because it may be useful to someone else.

I made this chart to see if it would be possible to combine the Disapora rules for generating clusters and the actual moons of Jupiter to create a playing space that seemed real but could still be improvised at the table. 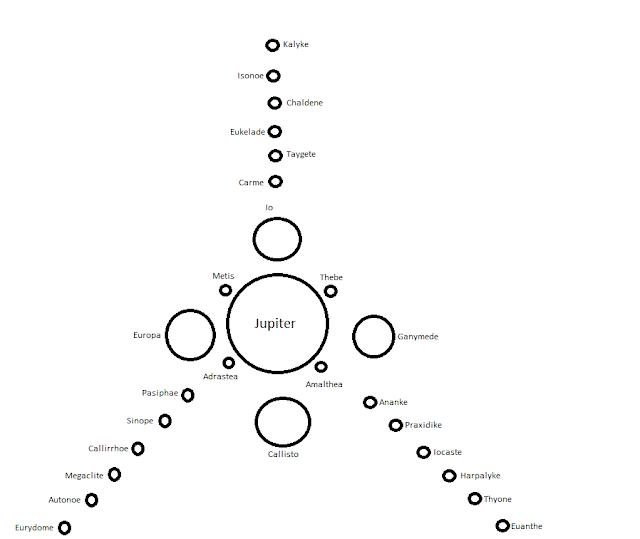 This is only some of the estimated 66 moons but the names are real. The small inner moons are the ones next to Jupiter. The large Gallilean moons are arranged around them and there are three groupings of six moons each, the Carme group, the Ananke group and the Pasiphae group.. The positions on the chart aren't meant to represent their actual positions in space but to show the ease of moving between the moons. We can use the random Diaspora rules to find out how easy it is to get from moon to moon within a group. Assume you can move around the inner worlds quite easily.

The tiny moons are really tiny, like a few k's long, but thats enough for a settlement or even a conflict, if there's one set of miners on one end and another on the opposite side.

This fits in well with the idea of reation mass, or fuel, being quite expensive and diffucult to get. So you have to conserve your mass and think carefully about when you are going to use it and where you are going to get more.

The simplest kind of reaction mass is water. Water is also valuable to us because we can use it to make air and to fill hydroponic systems to make food. It seems that for a bunch of relativly poor (in mass) Jovian moon settlers would use water as the basis for currency.

(Europa has loads of Ice of course but it's at the bottom of a gravity well and we could assume that having access to loads of water has turned the rulers of Europa into decadent Oligarchic Ice Kings lording it over everyone else, imprisoning ice pirates in the deep oceans, trapped by the very thing they sought to steal, which seems like the kind of thing dickhead rich people would do.)

So I turned the environment chart from Disaporia into this:-

The idea is that places can have Ice, which is really valuable in the moons but almost worthless elsewhere, or rare heavy metals, which are worthless in the moons but can make you a millionare back in 'The Wells' (or The Deeps? However low-g settlers would refer to the planet bound.)

This way there is a kind of market and politics inferred by the world creation and an interesting dichotomy of choice. Do you go to the moon-of-gold where starving miner kings rule from thrones cut from pure shining gold and barter kilos of platinum for chipsof ice? If you do, will you have the ice to get back?

I made this after watching some of the Sagan Series on youtube. Anothe chart-hack for the mining cultures of the Jovian Moons.

Email ThisBlogThis!Share to TwitterShare to FacebookShare to Pinterest
Labels: And keep your concourse in the deeps of his shadowed world, Cryogenic Rats, dark future, Science Fiction, The creative tension between visions of the future and the now, To The Stars