My 'Soft D&D' OSR-alike has a provisional name; (see above)

Reasoning On The Name


Opening structure is that of course it has to be a "This" ampersand "This" name, and it has to alliterate. Preferably it has the same number of syllables, so that's accomplished.

It’s not a double trochee though. GOOSE GOLD & GOBlins vs DUNgeons & DRAGons. There is just no way that either of the single syllable words of GOOSE or GOLD could ever be pronounced without the magnificence of a hard stress.

The Goblins are the easiest part to explain. I wanted something emblematic of D&D (see my previous post) and Goblins are a perfect fit for my idea of this game. They are non-trademarked so I can't get sued. Everyone has an idea of what they are, so no problems with recognition. And they fit real nicely into a non or less violent OSR style game as they are famously full of tricks, deceptions, mischief and hammery. They also make relatively good opponents for child PCs.

But GOOSE-GOLD? That will take some explaining.

Firstly, imagining the game to start with being based around a static community (if PCs "grow up" somewhere and have to deal with the same people and relationships over time they are more likely to invest in them and a lot less likely to be sociopaths as they can't just move on and escape the results of negative actions), I want there to be a pastoral or farming-esque Honobono element. Something from the home or the farm.

However, I also want it to be interesting and fun, and to sound cool. Which, unless you know a lot about farming, it’s hard to find that. Plus it also need to start with a "G" and have no more than two syllables.

I settled upon Geese, and as "GOOSE" has a stronger sound, and matches well with "GOLD", I picked that. 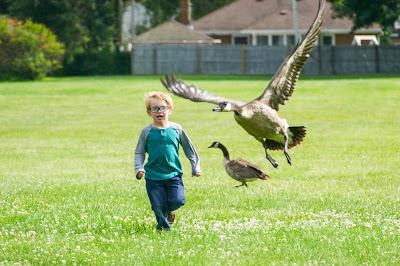 
In Goose-Gold & Goblins, Geese themselves are both the primary treasure, the sought-for item of the early game, and also poses a monopoly on the use of force.

I will explain all this later on.


Game starts, your Mum is sick and the Geese are missing.

(Oh and Dad is busy, missing, drunk or dead).

Lets assume you are all from the same family, or are close friends of the family. rothers and sisters likely.

I imagine the game being played including children, and maybe including parents and children. All being siblings in a family solves a lot of the decision paralysis and 'why are we doing this' stuff from sandbox games, or from people experiencing sandboxes for the first time and gives you a solid relationship in a way immediately intelligible to children, or anyone.

In a wider sense it embeds you in the village/community and gives you something to defend (your mum) and a place to adventure from.

Probably not the only way to play the game but a good opener.

(Could steal from Chris McDowall and say the family is in debt to the Vampire Bank).


is it even really possible to create a game with the levels of freedom, challenge and object orientation, with a genuine risk of loss or death, and not have it turn into violence?

Probably, maybe it is.

The means I am using to do this are;

> 'Set and Setting' (like Ryuutama) - the art, background, aesthetic, the way the world is described. Like in storygames this would also have a meta-effect as Goose-Gold & Goblins would be known as the 'less or non-violent' OSR-like game, and that would affect the people who bought and ran it and the kind of culture they created around themselves.

> Options available - so no specific weapons even allowed for starting characters, or accessible in the early game.

> Nature of opponents - they will almost never default to violence, using tricks and bullshit first.

> Any possible violence is clearly 'warning ringed' or 'escalation ringed', its very hard to get close to anything that might kill you without being warned multiple times. Hopefully three times at least, by diegetic elements in the campaign world. Warnings from Loregivers, the environment, the element itself and whatever else I can come up with.

> Your mum explicitly tells you "don't hurt anyone", and she's SICK and in BED. She NEEDS YOU MAN.

> A more high-level Diegetic reason perhaps? Like a Old king who is beloved but dying and doesn't want any violence, or the spirits of the land or something? Not sure yet. (More negative version, maybe there's a dark god or plague god who feeds off bloodshed?)

> THE GEESE - This is the key point. Nothing is more dangerous, frightening or terrible or upsetting than a violent Goose. All beings and spirits fear their wrath.

Geese become angry when they see or sense violence.

So if you are violent around a Goose, you are about to unleash a demon of Berserker rage. (Possibly they also grow in size in a Slaine-Like fashion during this).

(Otherwise, unlike in our world, the Geese are quite tractable.) 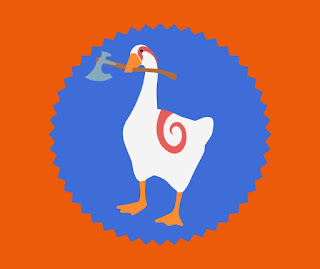 I want to avoid placing lots of explicit rules about 'do or don't do this' onto the players so only one element is an actual rule, and that a request from your sick mum, in the game, rather than from the DM

Set and setting is tacit, lack of weapons is a void rather than a rule, warning rings are part of the process of play, if there's an old king, or spirits who sicken from violence then.. still not sure about that. Could actually leave it up to the process of long-term play.

And of course, the Geese. And what could be more natural or reasonable than being unwilling to enrage a Goose? 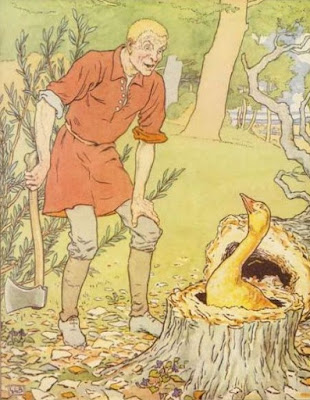 
I don't yet know why geese are so valuable to this society/reality. it might have something to do with Golden Eggs. maybe each Goose is like a Lottery Ticket and will occasionally bang one out, maybe one in every 100 eggs is a golden egg, and maybe golden eggs (or slices of them) are the main currency of the Realm.

Or maybe these eggs have some magical property, which is why Goblins want them. OR - maybe there is a one in so many chance each time of a Magic Egg or something, so eggs are spells?

so obviously, everyone wants to get each others Geese, and having a Goose, or Geese is a big deal for anyone - if someone gets a special egg, that’s a big deal for the village.

BUT - because Geese have a monopoly on the use of force, you can't just murder someone and take their geese (at least not directly), you have to be subtle and use crime, trickery, persuasion and misdirection.

As well as this, Geese can move around on their own, and they can co-operate or not with whoever wants to move them.

Maybe you need to calm or seduce them with an unguent or flute or something. Likely there are multiple ways to do this and you can find them out in-setting.

Thing is, within reason you can have Geese be a settled thing or you can have them breaking out and wandering etc

PLUS -I really like the idea of some child-sized chibi hero picking up a GOOSE in both arms, like a huge bag of shopping, and fucking running for it while being chased by Goblins.

I also like the idea of Geese in Goose-Gold and Goblins being really big though. Maybe they grow in response to violence, like magically, instantly.

Idea for cover is a bunch of adventurers and goblins running like fuck from a giant goose. Goose is in back field of image, people sprinting like hell in burst pattern towards the p.o.v. Goblins and adventurers intermixed. They were formerly scheming against each other but someone punched another in the nose. Maybe one Gob has a black eye and hero has a broken nose, and now the titan goose hurls itself upon them, their schemes shattered.

Email ThisBlogThis!Share to TwitterShare to FacebookShare to Pinterest
Labels: Design, I am not a rules guy, Soft D&D