The Greatest Image Known To Man

This post has nothing to do with ANYTHING I usually talk about on this blog, I mean even by my own rather loose standards. It is a post without reason of any kind. It is a product only of love.

My love for this image: 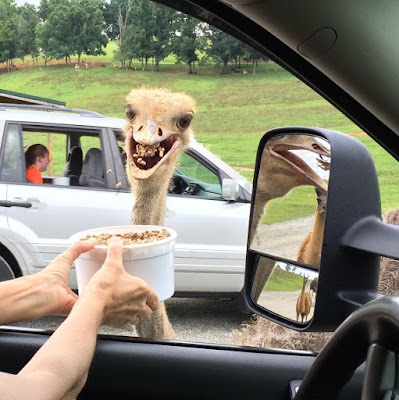 The informational content of this image is perhaps the most perfect ever devised by man.

You must click through the link above to examine the image at a larger scale and in more detail. You MUST do this.

The central and most obvious power relationship in the image is between the Ostrich, an apparent supplicant in search of food idly bestowed by its human captors, and between the unseen feeder.

We can see immediately from the terrifying madness in the eyes of the Ostrich, the ancient saurian madness of birds, from the almost-fearful holding of the cup of treats, from the food filling the ostriches mouth like dead bodies flooding from a corpse ship in a storm (the ONLY moving part of the image, all else is still), and most of all from the fragments of food, hung suspended in motion, either flying from the tub of treats or perhaps cascading from the ostriches mouth, that the power relation of this image is reversed.

The ostrich rules this image, it rules through madness. It is indifferent to the thoughts of man. It is a creature that cannot be imprisoned because it would not comprehend that imprisonment. The ostrich is free, utterly and insanely free and every other aspect of the image revolves around it in some way.

We see in one blow the cupidity and petty delusions of human 'order'. Yes, feed the ostrich, feed it and pretend you feel no fear, pretend your illusion of control is real. YOU are imprisoned. You are locked within a cage you dare not open.

The largest upper part of the wing mirror shocks us. The ostrich seen side-on exposes its saurian, alien nature. There is no longer the impression of a forward facing pseudo-human face. Its ancient beak gawps as if it would swallow the world and store in in its ghastly crop, which, symbolically, it does  by seeming to engulf what may be the branches of a nearby tree.

But what is this? Suddenly, what we thought we understood is once again turned upside down. The observer is themself observed. The Llama watches half-obscured. The calm, centred, indifferent observation of the creature subverts both the illusion of human control AND the frantic mania of the ostrich. The Llama sees all and seems unimpressed, what we hope is  merely a Buddha-like abstraction, may in fact be contempt. Like a being observing the grimy bloody toils of man from outside time and space, we must hope that its judgement is, if not kind, then at least not wrathful.

Is it any wonder the young girl cries and screams? Truly, only she fully understands the recursive and maddening shifts in perspective and thought in which she is enmeshed. Much more than the poor moronic picture-taker, whom we now ourselves picture in the minds eye, smirking with the bovine grin of unthinking cattle.

There is a second car and like the first _the driver is obscured_ Are they still there? Is anyone in that car except the girl? Is that car, somehow, the future of this one? Is the screaming girl simply the secret horrible awareness of their situation which, no doubt, the picture-taker and treat-bestowed desperately conceal beneath nervous smiles and clichéd quips?

The image, framed once by the car window, is framed again by the windows of the second car. And if we could see the mirrors of that car, if we could see what that girl sees now, what new impossible chaos would we apprehend?

The mirrors of the second car cannot be seen and it is right that they cannot. Whatever they hold is too much and too terrible for sane observation. The girl sees for us all, she accepts that horror so that we may see its action in her face and understand at least, how lucky we are not to understand.

Oh what fools we are, for the image has one final trick to play. Away from the drama of the cars, beyond the ridge, beneath the trees, what do we find?

Llamas in great numbers, sitting calm and unconcerned. They see all, they seem to know all. Surely the distant screaming of the girl must have reached their ears, yet they do not even condescend to stand.

And the Llamas can see clearly what goes on inside the second car. They see both cars. They know where the drivers are.

The calm of the Llama in the mirror, its indifference to the ostrich behind it, was not stupidity, it was the thoughtless calm of an all-seeing god.

Finally, in their isolation, in their terrible and stellar stillness, we see the true horror of the situation. As noxious and poisoned as the relations between man and ostrich may be, at least they are united together in life, drawn together by need, by an urge simply to exist beneath the painfully neutral gaze of incomprehensibly superior beings. The horrible tableaux of our mutual discord is transformed into the very image of the courage to resist the utterly enfolding despair that threatens us both.

Yes, we are monsters! Yes, we are beasts! Yes, our every waking act inexorably enmeshes us in an endless matrix of mutual harm! There is no escape, the girl understands. But at least we live! We choose existence! The ostrich laughs at the horror of its own situation. The treat-bestowed no-doubt laughs also.

If the watching Llamas on the hill can hear the distant screaming of the girl, we must hope they hear as well the mocking laughter of both bird and man

See what we make of your trap O' fates.