(Another in my attempt to 'Goosify' the Top Ten Emblematic D&D Monsters)
More correctly, the 'Gelid Kjub', 'Silent Square', or 'Sorrowful Solid Square'.
Silent, hunting through the gloom, slipping through the moonlit trees, oozing in through front windows pickle-people bobbing and knocking on the door-frame as it seeps. A hunter of sorrow, the Cubes comes when you are sad.  Creatures of unstoppable nothing, remorseless, the Gelly Cube can not, will not, stop, until you are cubed, or until you cheer up.
Gelly Cubes vary in size according to their age, the youngest might barely fill a doghouse but the largest have been said to fill mansions. An average cube is about ten feet high and wide.
The Cubes themselves are nearly-clear cubes of gel, or dim pickle, that move through tiny shuddering peristaltic action (like a snakes belly).  Its edges glisten slightly in moonlight, making it seem like the ghost of a gigantic box. Circling at the centre of the older cubes are small amounts of gold and gemstones, floating like a speckle of distant stars. Around them are the Pickle-People; those whom the cube has absorbed. All are pickled and silent, bumpy, as if they had been in the bath too long, and grown old there. Many are small. Some are the size of a shoebox, others as small as a nut, some are dots, like these ............
The Cubes can easily live in the sea and they use deep dark rivers as roads.

WHAT IS IT MADE OF?

The cube has a kind of skin, about a foot to two-foot thick; its outer lipid layer. This is the surface it manipulates to move around. It can extend tentacles of this stuff a little way and make the layer sticky, like strong glue. It absorb whatever it touches with an unbreakable hold. For this reason, do not touch the cube.
Within this layer is the pickle-core, a more watery substance, like pickle-water, but more dense. Things and people float around in here, bobbing as if at sea, turning slowly as if they were trapped in a jar.
Like a Cat, the Cube can squeeze itself through any gap which will take its larges solid part, (usually its most recently absorbed Pickle-Person), and like a cat it has a good sense of exactly how big this is.
Yet this process can be excruciatingly slow. The Cube is never fast and it can take all night to ooze into a room. It will also never entirely divide itself into parts, always remaining whole.
The Cubes are dumb and shy, like an idiot dog, and no-one knows how they see but like bad cats they always know when they are being watched.
How is it thinking? There is nothing in there..


WHAT DOES IT WANT?

All the Cube wants, really, is to help those who are suffering, so that they no longer have to feel. So it finds them, oozes into their house and hugs them with its glue-touch, sucking them down to become one of its Pickle-People.
Is the Cube feeding off the sorrows of its Raisin-Men? It might be.


WHERE DO THEY COME FROM?

Nobody knows but I think Moon Mages have something to do with it. I have heard that the Cubes are simply the tears of the Moon, mixed with sad spirits and strong glue, then jellified in massive trays. 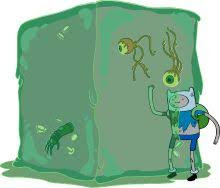 LIFE IN THE CUBE

The Cube dissolves everything but gemstones, gold, underwear, hair and living flesh.
The gems and gold orbit at the centre of the Cube and are splurged out in dangerous situations, like the ink of a squid.
The hair remains attached to the people and the people are all pickled.
Being in the Cube is like being under still water, like at the bottom of a swimming pool, looking up. Everything is quiet and far away. Nothing is sharp, or cold, or warm. The world outside, like a world through glass, moves on, but you seem quite still.
In the cube they don't eat or poop, or fully breathe. They don't sleep or dream, or ever fully wake up. It’s like being half-awake on a sleepy Sunday morning. Neither up nor down. They hardly want to leave the cube. It only took them because they were terribly sad, and in here they feel nothing, neither pleasure nor pain. No fears, and no desires. Just slowly growing smaller, getting pickled.
The Pickle-People slowly become small, like black shrivelled Raisins until eventually they die, but this only happens at the end of a natural life. It can take a long time to get that pickled.
Some Pickle-People want others to join them in the Cube, to join them in Nothing. They wave slowly with thir pickle limbs, like underwater people asking you to jump in.
If you can get them out then you can rehydrate them. After an hour or so in a salty bath they will plump right back to normal size, absorbing all the bathwater, still with raisin fingers though, which they keep as a mark. Coming out dazed into the clear world.
Maybe they didn't want to come out?
What do you do with someone who didn't want to come out? Or with someone who is still so sad that they end up summoning more Cubes?

THE CUNNING OF THE CUBES

As shy and slow as they are, over time the Cubes can become cunning. At first they learn disguises.
As it draws near to its sad prey a Cube can learn to hide itself in order to approach unseen. It picks up bits and pieces it moves over in its gluey outer skin and then piles it up around itself in a secret covering so that when day comes, no Cube is seen, but only its shell. If you find a the cube-shell empty, you know that one is near.
I admit, it is not a great disguise since all of its shells end up looking like a big pile of sticks and stones with a suspicious cubic shape. So, after they have learnt how to make shells, the Cubes become even more cunning, developing into Caddis Cubes, or even dangerous Hermit House Cubes.

This cube has managed to pick up enough of the right kind of stuff, and learnt enough about what houses look like that it can form something like a mad shack. It looks like a house made by a big bird, brick, stone, wood and tiles all jammed up like the twigs of a nest. Be careful if you see these isolated homes.

The most dangerous, subtle and advanced form of Sorrow-Seeking Solid Square. A cube might  "find" a house that fits it neatly, like a suit, (often after slurping up the inhabitants). Then it just grows until it fills the home and carries it around - moving slow.
These houses appear strangely and in strange places. A house with no road poking half out of a cave, under the surface of a pond, on a beach or up  a big tree.
Some of these cubes even send tendrils of themselves up the chimney to make fake smoke.
Are you being hunted by a House?
A new house on the edge of town, one that no-one goes to? Do you turn around and see a city-house on the crest of a hill, then turn back to see it gone? Do barns get closer when you turn away? Or even a whole high street of small shops rising up out of the sea at midnight, the surf crashing around them, and slowly oozing up the beach to hunt? A wolfpack of homes!


DEALING WITH THE CUBES

The Cubes are very shy so noticing them and being very loud about it can drive them off for a while.
Point and shout; "Cube, I see you!", "Hey! What do you think of this CUBE over here?", "Come and look at the Cube!"
An aggressive poster campaign can ward them; huge posters on the edge of town; "CUBES! GOOD OR BAD?" and "HAVE YOU SEEN A CUBE? ARE YOU SURE?!?!?!" and  "LOOK TWICE AND DON'T CRY, IT MIGHT BE A CUBE!"
The Cubes are incredibly sensitive and find this all too awful. They shut down in a funk. Its cruel, but sometimes you need to be cruel to avoid being eaten by a Cube. If you go in to one you might not want to come out.
Noise and bother will often cause a Cube to hide itself. Lots of public jollity, talking VERY LOUDLY, having street parties and birthday parties every day, bell ringing, singing and dancing.
The big problem is making them go away forever. Since they are drawn to sadness, you would have to heal the sorrow that attracts the Cube, and that is a difficult thing.
Or, the Well-Dweller might say; "Just chuck them in the Cube. What good are they anyway. Once it has them it will leave."
Getting someone out of a Cube is a sticky problem, literally but also metaphorically. Maybe you could hook them out somehow? Maybe you could dry out the Cube with huge amounts of salt or the focused rays of the sun.