Kobolds - ANOTHER of the top-ten most-emblematic D&D monsters which, on examination, doesn't seem that good.
The Owlbear, while pleasingly ridiculous in central concept, didn't do anything interesting relating to either bears or owls. It was _distinct_ though. The central concept leaves a strong impression.
The Kobold though. Essentially Goblins-But-Not.
A conceptually-amorphous and unclear monster Kobolds are. Perhaps the most unclear in their central concept. They famously change from edition to edition. Sometimes little dog-men, sometimes little dragon men or lizard people.
The one thing that sticks in my mind about the place of Kobolds in D&D is that they are emblematic of weakness and a kind of petty failure to threaten in a way Goblins are not, and that their most memorable instantiations are moments of counterpoint.
Yes, the adventure says, these are Kobolds, the weakest bitches in the game, but THESE Kobolds.. etc etc etc 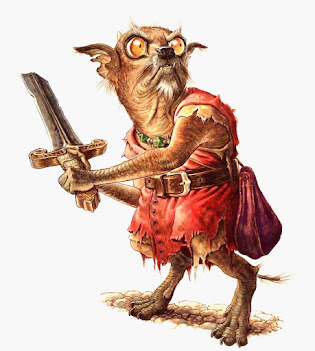 I only came up with one even-workable concept for Kobolds; anime-cute puppy/dog people who are just super UwU and fluffy, but they make use of utterly ruthless Vietcong-style traps, arranged with dark perversity.
Not a great idea; a one note joke, but maybe kids would like it, and something that is interesting is - how to make traps that are fiendish and feel dangerous and horrible, but without them being lethal or too horrifically violent?
That would actually be a challenge great enough to validate the effort made.
(At some point with this game I am going to hit a hard limit of things that you can take away from child adventurers that aren't blood and flesh.)
So, here is my brainstorm of... 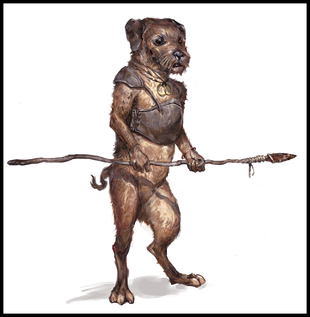 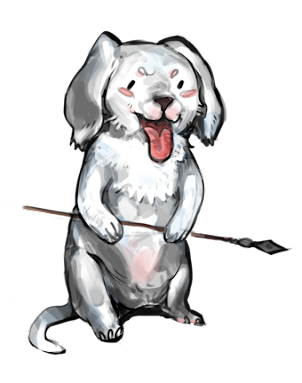 What on earth happened here? If you read through you probably started thinking; "He's just ripping off the old Batman TV series but NOT SO, at least not consciously. I did go to a website for the last handful and start reading through lists of the old Batman traps, but it was only then, with most of the list done, that I realised that I had, either unconsciously, or through parallel thought, actually mimicked a lot of those mechanisms.
Still, some very clear confluences must include; Batman TV Series, Loony Tunes, Home Alone, possibly Funfairs. None of these were deliberate influences and I can't tell if I drew from then accidentally or just thought alongside them.
A difficult polarity the list brings up is the marginal space between realistic physics, unlikely physics, cartoon but still intuitive physics, and surreal or utterly ridiculous reality warping.
I instinctively want to keep the Trap Dogs more within the real and pseudo-real 'Home Alone' space rather than them being Wyle E. Coyote. It feels appropriate. But I don't think I could give up on at least a few of those painted walls or retracting stairs.

Top-level Kobolds can disguise themselves as common objects so perfectly that that’s all you can see. So the final boss or major Kobold villain you encounter at the end might be a shoe, or a rubber tyre...
Kobolds gaining in reality-warping slapstick as they gain in power might be a useful limiter/diegetic expression that lets me use some whacky stuff but still have problems solvable. Like if you want to stop the ACME Company traps you must find 'The Black Boot'!
Another; Kobolds are squatters. Home invaders. While the PCs are out and about adventuring, the Kobolds invade their home and turn it into some Home-Alone shit with the PCs as the invaders. Pleasing elements of this are that it creates a mission of TAKE BACK THE HOUSE, which is intuitively clear, emotionally compelling and tactically coherent. The home base is now a tricksy tactical space and the PCs can use their knowledge of their home to outwit the baddies. Also if you defeat the Kobolds you can re-purpose all the traps for your own designs. 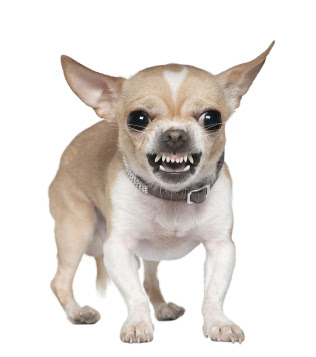 WHAT STRANGE GYGAXIAN CULTURE SPRINGS FROM THIS?

All of these ideas are based around useful play, but what happens if we jam them all together and assume them to be a coherent whole which actually describes a real culture
A simple answer to the home situation is that they are jealous of not having one.
Jealousy, ressentiment and feelings of weakness explain a lot of their other patterns as well. The hide because they don't want people to see them. Maybe because they are SO CUTE!! and whenever people see them they just pick them up and touch them, pet them, and the Trap-Dogs HATE IT.
Probably they are also fearful, like small dogs are always yapping at everything because everything triggers a threat response. They know they suffer an intense inborn fear response and they HATE that too because it makes them feel weak.
They just want to be feared and respected. Maybe they even have low self-esteem related delusions of grandeur. Obviously its not enough for them to use their crazy powers to build their own house. They want YOUR house, because they need to prove themselves better than YOU. Its more important to take your things than it is simply to have things.
Honestly they seem surprisingly sympathetic monsters. Perhaps near-redeemable monsters and, (christ curse me for writing a moral lesson), a good example for children of toxic low self-esteem. 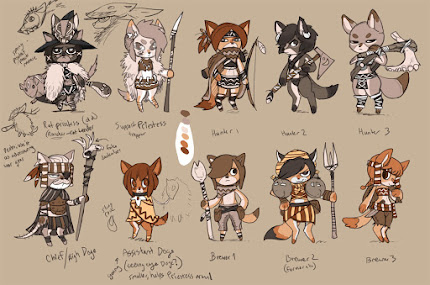 https://imgur.com/gallery/gJjfiX3
Feel three to throw ideas and concepts in the comments.....
Posted by pjamesstuart at 09:39