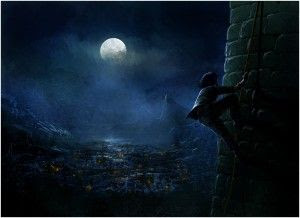 Nobody knows what Thieflings are, all anyone can say is that they wear black masks and striped white shirts, that they carry things away in sacks, that they steal for the joy if it and that they revere, and perhaps serve, The Master Thief.


'The Thieflings' is a kind of club made up largely of Foxes, Racoons, Magpies, Chimney Sweeps, Tinkers and various others. It is a league dedicated to extraordinary crimes.
(Not Dogs. Dogs are never Thieflings).
When the moon is gibbous, the Thieflings gather in a secret place.
First they put on their finest gear and their magical masks. Then in a place different each time, perhaps often the cellar beneath a pub, a wizards basement or a Draculas attic, they come together and  toast each other in cups of dew and dandelion wine, giving each other grave nods and sly winks above the rims of their drinks.
Here there is always a window through which the moon might be seen, a long table at which the Thieflings sit, a portrait of The Master Thief with a brass plaque reading Our Patron and outside the area is hung a wooden sign bearing the words The Thieflings, and a long cord with a bell.
This is done to bawd the enemies of the Thieflings. If the bell is ever rung it means their meeting place is discovered and whomever enters next may be a mortal foe, or a very superior thief.
Each Thiefling tells the story of their theft and, if successful, presents the purloined loot, to cries of 'huzzah!' and 'neatly done!', placing it on the stage or table, visible to all, and balancing an empty champagne glass atop.
Before moon disappears in the sky, all the Thieflings vote by flicking pebbles across the room into the glass atop the loot produced by their favourite crime. Pebbles that miss and glasses which are unbalanced or knocked over are discounted, so it behoves the Thief in question to impress not the greatest number of thieflings, but the most skilled amongst them. An unskilled vote is hardly a vote at all.
The matter at question is only partly the value of the stolen loot, (though more valuable things are likely to be more fiercely guarded), but the originality, courage, boldness and audacity of the theft. Stealing from the poor is little regarded, not because it is wrong but because the poor have few resources with which to defend their property.
The winner is then acclaimed as one of the 'Chief Thief' and one of the 'Thieves of the Year' (the same individual cannot win more than once a year so there are always twelve, one for each month), and all Thieflings gather to 'salute the moon', after which they each hurl a cup of butterscotch or ginger beer into the shadows 'for the patron!'.
................................

The masks of the Theiflings are curious items. Anyone wearing one can speak, even if they are a fox, or even a spider, and is impossible to identify or name except using the most general of physical characteristics.
So one might point to "The Many-Limbed Lady" or "The Bush-Tailed Gentleman" but one would not be able to say for certain if the individual being described was a Fox or a Spider. Even if it was explained later all that would remain in memory would be the idea of a very civil fellow with a bushy tail.
The reason the Thieflings all wear a striped jersey when carrying out their crimes is so that if they are seen, no-one will be able to identify them as anything other than; "the fellow in the striped jersey". But they will know, amongst themselves, that a Thiefling has carried out the crime. 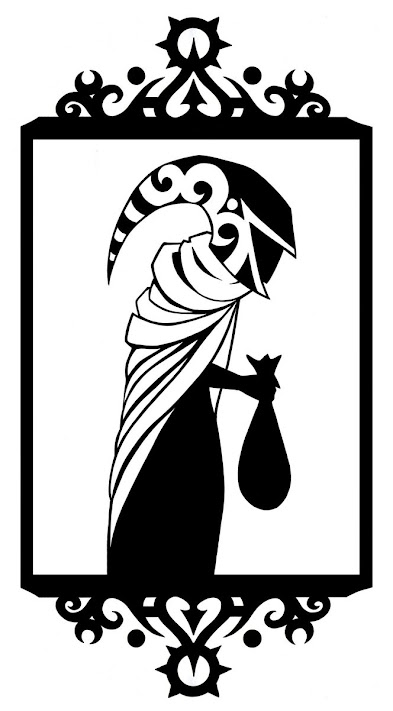 Obviously, the addition of language skills to simple animals, and the inability to correctly identify them, either as animals or even individuals, opens a wide range of possibilities for thieflings so far as crime goes. A spider could pretend to be a governess, a Fox engage in financial fraud, a Raccoon might become a pirate or a magpie rob a bank.
There are no specific rules about the use of force, but 'icing rubes' is considered poor sport, unless the theft is extremely audacious, or more preferably, if the use of force is threatened through illusion, or used to distract from a deeper theft.
Holding up a bank with a Banana for instance, is "a very neat hand, very neat", but holding up a bank with a Banana, having the place besieged by the Law and then escaping through the sewers to rob the confectioners across the street is "A Master Stroke".


One never knows if a particular animal is a thiefling or not. Membership is secret and they do not discuss such matters amongst themselves. One may see one animal giving another 'the eye', or a lady with a long nose greeting a gentleman in a red fur coat curious nod, but can you really be certain?
As to their relationship to their patron, The Master Thief, even less is known. It seems likely that he, (or she, or them), would approve of the Theiflings motivations at least. It also seems likely that they are the source of the Theiflings masks

................................
Getting your stuff back from the Theiflings;
What do they even do with it?
The final destination of the Loot varies a great deal. Technically this months 'Chief Thief' wins all the loot which all contesting Thieflings presented that night.
Its customary for them to agree for various items to be auctioned off, ransomed back or sold in order to cover the costs of all the ginger beer, fresh dew, continually moving the clubhouse etc, so you might get it back that way. Of course your goods might also end up being sold to a powerful being..
The 'Chief Thief' might also just keep whatever it was.


Becoming a Theifling
Of course animals all know about the Thieflings, but when’s the last time you spoke to one?
Still, if one carries out a few truly remarkable crimes, you might be invited to join the Thieflings (the sign is a black mask being left on your pillow).
You could also try tracing the Thieflings to their den for this month (if you think you know who some might be), and actively stealing your own goods back from right under their noses. Should you achieve that act it shall be you who is acclaimed 'Chief Thief' and a 'Thief of the Year' and invited with the other eleven Great Thieves to the Midsummer Ball where one will take part in the great contest of the 'Thief of Thieves', and perhaps the winner will be great enough to out-steal The Master Thief themselves?