There is someone in the bathroom, running the water, leaving the tap dripping overnight, tracking trickles through the house, wet towels strewn upon the floor where surely they can never dry....
Who will admit to it? Not you.
There, peeking from behind a hedge or around a wall. Looking closely, staring. Listening... to your MIND.
Just do NOT think of any secrets.
DON'T DO IT. DON'T THINK OF THOSE SECRETS, ESPECIALLY NOT THAT ONE!
Too late, it’s got one! And its running off with it!! 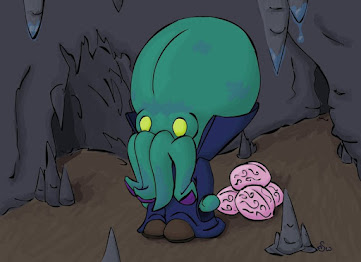 Ok, maybe not exactly like that. The difficulty of making the attack of a non-lethal psychic monster solid and tangible, gameable, intuitive and coherent for children is one of the more interesting challenges and I doubt I will solve it here.
Also I am far, far, faaaaaaar from the first person to have the "what if Mind-Flayers were Cute" idea. Its almost a benediction when I search for equivalent images for a blog post and find none as it means that few other people have conceived the same thing.
Basics first; 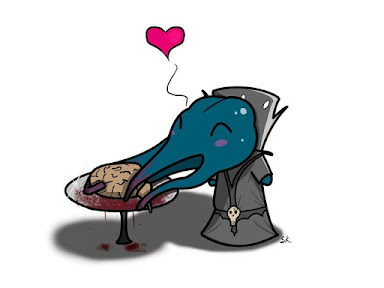 Little guys, maybe two or three feet high, max. (Though a lot of things in this game are turning out to be child-sized, I suppose that makes intuitive sense.
Humanoid chibi cuttlefish men, round, wear *wet* bathrobes as they don't like to get too dry. STEAL TOWELS. Wear damp bathrobes which trail on the ground behind them, leaving wet patches. They are always in the shower and the bathroom is always steamy, the floor never dries, like come on man just put the fan on!
Likewise, not bothered by cold, wet or dark, but dislike heat, dryness and bright light. They don't like sharp or spiky things and salt hurts them so they fear it. Have single tentacle hands and can grasp things like babies but can do fine motor work with their face tentacles.

Via numerous wiles, the Secret-Eaters are like plump, wet ninja stealth masters in bathrobes.
They can do camouflage and alter their shape, texture and colour like cuttlefish (though they hate to take off the bathrobe as it makes them feel naked). They can octopus their way up walls and along ceilings (though they often leave wet trails. They have soft, boneless bodies and so can squeeeeeze through things, and they can stick to things too.
Should all these methods fail they can make themselves invisible, in a way, be stealing the small secret of their presence from the minds of one who discovers them.

How then, can one know that the Secret-Eaters are about?
- Dripping (they leave the taps on).
- The dragging of a wet bathrobe.
- A wet splotching sound.
- People being dazed and confused.
- People missing time, minutes or even hours of their day.
- People forgetting important things and not knowing why, or even *what* they have forgotten sometimes.
- In short, everyone acting as if they are old, and a ditherer to boot.
- The stupidest people in town saying they saw little octopus men. (No-one will believe them as they are clearly very stupid). 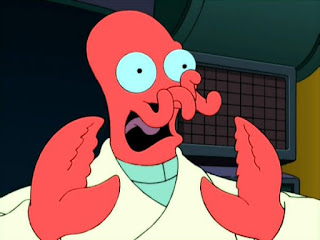 HOW THE SECRETS ARE STEALED

I really like the idea of them leaping on you tentacles outstretched like Zoidberg;
blaaahhhhgggh
This makes it a lot more physical and visceral, though it may limit some possibilities in a secret-thinking game (see below probably).
So, it has to be close, meaning it will be creeping and peeking. Secret Eaters, Secret Creepers, Secret Peekers! One crawling across the ceiling, dropping down one you, then they suck the secret out through your ear (maybe also your eye or nose), then they make a gurgling noise as they gargle the secret and turn it to pearl. Like an oyster maybe, surrounding something with a protective core.
The idea that you can chase or track them and maybe somehow get the secret back is an important adventure concept.

They hear thoughts as noise, sometimes quite loud noise. Like the radio in another language - but like another language they can recognise and understand thoughts about *them*, and that makes them hard to track, (along with all the damp Ninja stuff).
Like if you walk into a room and think "Hmm, maybe the Secret-Eater is behind the curtain", they will hear you thinking that and either ninja out of the way or change shape or something else.
Maybe the only way to track one is by not really thinking about it, so you need a distraction. Like someone along with you to read a really long book, or a circus performer, or an annoying relative. Someone with stupid loud thoughts that will drown out your own.
Of course, someone really really really stupid, with almost no thoughts in their head, might sneak up on a Secret-Eater - the silence of their mind making them almost invisible.

WHAT THEY DO WITH THE SECRETS

What do they do with the secrets and how do you get one back?
I guess they can either keep the secret or digest it.
exactly what form is this secret in? Like an organ, a crystal, a snot ball?
Snot ball seems the way to go, like a liquid marble in a ball of clear snot and you can see the quality and size of the secret by the mucusy ball. Dark secrets are dark, big secrets are big etc.
The secreteater takes this somewhere and coughs it out. (You can squeeeeeze a Secret Eater to the secrets out but be careful, they are wriggly and wet). Then they can store it for safekeeping, or just eat it there.
Idea; maybe no secret eater can eat secrets which it itself has gathered. Instead it needs to swap secrets with another, so all the active secret-eaters are trying to feed their friends awwwww.
But they can also survive by trading in secrets, selling them either individually or as lots, big bags or jars of mucusy pearls - and you can never be sure whose secret is whose so if you find a bunch it can be hard to get them back to the right people, you will need an EXPERT of some sort to examine them, the Pawner can do it maybe.

Secret Eaters actually need secrets to live, is their natural food so if they can't get any they will starve to death. That might be why they end up serving dark and dangerous creatures like Crime Birds, Draculas, Edgy Dragons, Sinister Pigs, Ratmasters etc. They have access to the most secrets and can provide means for the Secret Eaters to get more.
They are sometimes transported in jars by powerful beings, they keep trying to unscrew the jars from the inside. You can usually tell that a secret eater is in a bottle or something because the owner will try to keep the contents hidden while continually reaching down to re-screw it.
I mean if there is a villain or any potent intelligent opposition it can hardly be difficult to work at least a single Secret-Eater into the game as they will be in much demand.

The sea, in times past, held many secrets; those of poets, dreamers, gods and those who dwelt in the moon, bottles hurled, ships sunk, kingdoms drowned beneath the waves. All forgotten things descend finally to the sea there to lie, forgotten, secrets known only to the sea itself, turned over in the darkest places, like the pages of a book drifting open in the dark.
It may be here the secret-eaters came from and from where they were sent, for stealing the sea-secrets and turning them to glistening pearls, hoarding them like treasure.
So the sea banished them, never to return and they crept into the dark and dankest places of the earth, living wherever it was wet and sought secrets still. 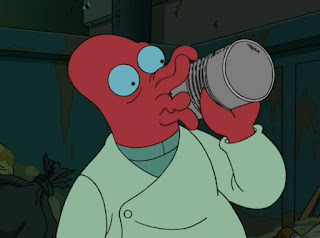 The concept of some kind of "don't-think-of-the-secret" game played round the table to gamify the seeking of the Secret-Eater is a tantalising one.
As is the use of parlour-game techniques more generally. There are a huge range of these and I know little of them but it seems to me that they represent and untapped resource for non-dice based decision making round the table.
I think Courtney wrote something about this a while ago, let me see if I can find it
ok I can't - sidebars!
But to return, playing a kind of game with the players where the challenge is "Don't think of a Secret", and if you do, they Secret-Eater gets closer an eventually goes BLAGGH and sucks it out, does seem like it could work?
But how would it work?
Furthermore, des it copy the secret or copy/delete? Copying is simpler to play through but copy/delete takes Player and DM into complex territory. Lets say for young players it just steals the secret and you know what it got but for older players it might have taken a secret from your mind and left you without it, bringing u the possibility of the player knowing something that the PC doesn't know, or of knowing the nature of something the PC doesn't know.
Answers in the comments I guess.
Posted by pjamesstuart at 10:59