One of the canonical D&D monsters and a really hard one to conceptually Goosify.

Ok lets summon some Galaxy-Brain energy and break this one down; 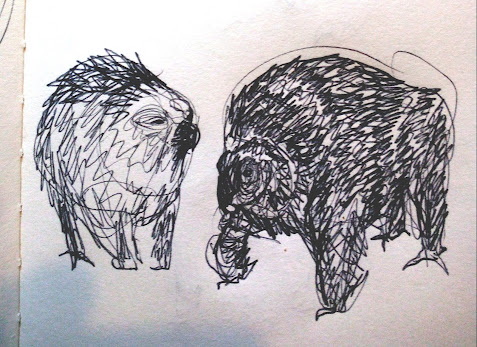 All images by Scrap Princess - thanks Scrap!

These are all terrible 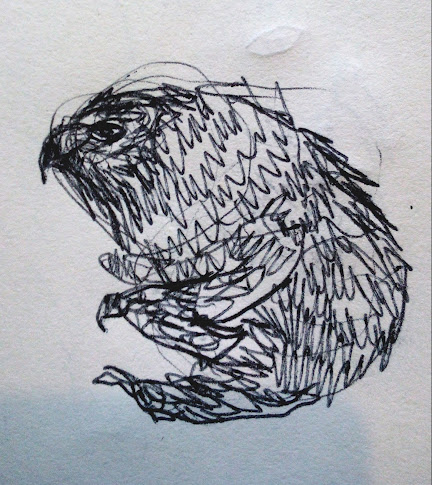 Beehives, Honeymice, resteraunts, confectioners, butchers, food delivery people and fisherment are attacked in the glaoming or the darkness by a creature of 'a terrible whiteness'. Something utterly silent, fleeting in on pale wings as quiet as the dawn.

The Strigibjorn, an Owl with the size, ferocity and temperament of a Grizzly Bear, and the intelligence of a cart-flattened hedgehog. Once this unearthly and untraceable creature moves into an area it preys on all nearby sources of honey, fish, truffles, picnics, caviar, fresh pizza and pie. Ghosting through the darkness in the most absolute and terrifying silence, swooping down to seize its prey in talons like scimitars and either feasting where it lands, or leaping off into the night.

The Strigibjorn flys alike unto the bumble-bee, its flappy wing arms, which seem insufficient to support its weight in flight, thrumming with increadible blurring speed, yet still with the unearthly silence of the night-haunting owl, its huge body vertical, swaying slightly with the inertia of its flight, the Strigibjorns head swivelling this way and that like a periscope.

The Strijbjorn tunnels its lair beneath a massive tree, or in some dry and sandy ground, either using its own scooping limbs or cohabiting with some other large tunnelling beast. There it lies in the wan day, huge, majestic, face down on pizza boxes like an idiot, surrounded by its own dry vomit.

Then it rises like a spirit into the starless dark, using its incredible hearing, smell and telescoping night vision to locate its prey; always some kind of delicious food, nothing cheap you know?

That food can be a person! But not a poor one.

After taking its prey in the darkness, slicing homeward through the air, maybe hitting barn, also possibly a tree or two, the Strigibjorn retreats to its dry tunnelled lair where it eats the prey (if it hasn't already) and then, after digesting it for most of the night, goes outside to drop a wet glutinous poo, before returning to vom up a dry nugget of bones, hair, shoes and coin.

In daylight a Strigibjorn often wakes up woozy, with a terrible itch. Unable to easily scratch itself the Strijibjorn will, (after a few attempts) roll over and get itself up, then stagger out into the wild like a murder penguin, its head rotating this way and that, eyes narrowed against the glare of the sun. Then it will locate a particular tree which it favours, and rub and roll itself against it, attempting to salve the itch.

The Strigibjorn cannot move its eyes due to its huge tubular optic nerves, instead rotating its head around like a bottle top. If it has an itchy head it will press it against the tree trunk and rotate it, going "WHRRRRRRR ZE ZE ZE, WHRRRRR ZE ZE ZE".

The extremely soft, silent and valuable down feathers of the Strigibjorn are often left embedded in this tree, marking it. These feathers are so soft that shoes packed with them will make no sound and a pillow full of them can put anyone to sleep, even severe and cursed insomniacs

During much of the year the Strigibjorn is a threat in the dark to all, but at unknown times, (for the Strigibjorn never really knows what month or season it is, being surprised each night), the Strigibjorn decides the time has come to hibernate. It will put on weight and prepare itself for the long sleep.

Thence begins a reign of terror as the Strigibjorn goes into predatory overdrive, attempting to eat everything in its chosen territory, smashing into butchers and takeaways, eating delivery boys, stealing cheese and annihilating the populations of Honeymice.

When it has eaten enough, or just forgotten what it is doing, the Strigibjorn will decide that the time to hibernate is NOW and will lay facedown somewhere dry to sleep it off. Though not necessarily anywhere out of the way, it might be a stable, your bedroom, your attic or shed, the post office, an aunts house, who knows?

The Strigibjorns hibernation will last for an unknown period of time. The creature can be moved out of the way, but this must be done VERY CAREFULLY, by several people with slender poles either stretchering it out or putting a bag over its head and carefully and softly, and QUIETLY, rolling it.

YOU NEED TO BE REALL GODDAMN QUIET OK?? IF THIS THING WAKES UP IT WILL FREAK THE HECK OUT AND KILL US ALL!!! DEAD YOU HEAR ME? DEAD! SO BE QUIET!!!!!!

The creature has few weaknesses. One is its incredible stupidity, though this is as much a threat as a weakness. Another is water, for the Strijibjorns stealthy feathers are not waterproof at all. It will flee from rain, can easily drown if forced into deep water and drenching it makes it look utterly crazy and severely limits its flight capacities.

For those eaten by the Strijibjorn, there is a slim hope. If someone can invade the creatures lair and locate exactly the right death nugget, and can also find the wet pooping place outside and find most, or even all of the victims wetter elements, they can return to town and dissolve the nugget, revealing the bones, teeth, hair, clothes, cash and socks.

Then, perhaps, a seamstress of incredible skill, a great barber or a Possible Witch could sew the victim back together, with varying degrees of success and horrorfication, depending on the amounts recovered, how well they were assembled, what they ended up being stuffed with and the size of their stitches. 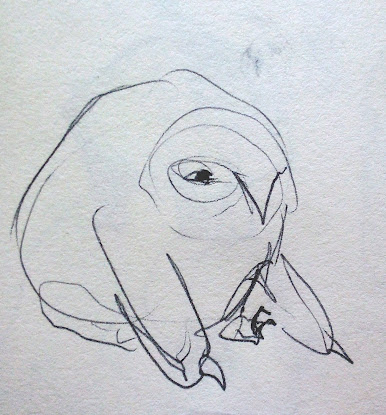