15 Bukako and the Pleasing Fish

Scrap has given us a would be elemental.

And asked for the meaning of this image; 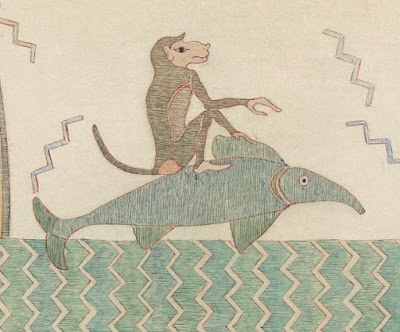 Bukako and the Pleasing Fish

So began the esorscelment of the Pleasing Fish by the Sorcerous Monkey Bukako Wisest of primates, except for a few. That eater of books and fiend of the waves.

Woe! Woe to the Pleasing Fish! For when shall we see such fins again? Woe to the lightning-raddled waves, Coral kingdoms now fulgarite-struck! All due to the cunning of Bukako, Wisest of primates, except for a few.

Bukako, first and only subject of the paper-eater spell, O unwise sorcery! Trapped by an asp and sold of to a sorcerers churl, that dominating Mage named Bezelzak-Belvana-Besrok, the Mind-Phage of the Inner Dark. Her churl named "Swab-It of Besrok" for their most common task.

The serf, Swab-It, thought to practice the Greater Magics and seized the asp-struck Bukako feeding him runes of power and ninety-five illuminating herbs, eventually sacrificing sixty-six ants in a summoning of one of the more forgettable daemons.

So Bukako was imbued with power immortal. he would know forever, any text he ate. At first his appetites were minor, and made little difference, receipts and casual notes, fragments of knowledge, floating in the void of an illiterate monkey mind. Yet Bukako was wise enough to hide his knowledge from the Swab, keeping always a little back, and then a lot. A diet of mashed up teach-your-child-to-read books sparked consciousness in the simian. From that point on, Bukako planned, he thought and dreamed within his fairly-small skull.

The Books of Spells were his aim! Those Bezelzak-Belvana-Besrok kept hid and warded behind multidimensional locks and elemental hounds.

Ultimately Bukako broke out from his cage, entered the sorcerous sanctum of Besrok and ran wild amidst the multiversal tomes, chewing and eating wildly! The monkey tore! swallowed! bit and chewed again until his spit ran like fluorescent paint!

Great was the battle betwixt the Monkey and the Mage when Bezelzak-Belvana-Besrok returned!

That eons-old walker in the dreams of Gods against the hairy thaumaturge now bloated with stolen power! The city of Ix shook like a leaf, seven temples were flattened, four thrown back in time, two turned to glass, one to flowers and one fresh temple brought into being, housing an unknown god.

Ultimately, as her subtle spellcraft clashed and locked with the chaotic multiplicity of Bukakos bitten powers, Bezelzak-Belvana-Besrok descended to low fisticuffs and booted the beast through a portal in space and time.

Since that day, Bezelzak-Belvana-Besrok, all her descendants, many of her students and three of her elemental hounds sought Bukako, the Sorcerous Monkey, wisest of primates except for a few. For he had nibbled not just whole spells, but vital fragments of some powerful incantations which now existed only in his mind. for the return of these torn glyph-scraps alone, a kings ransom would not suffice.

But what of the Pleasing Fish? That most supine and relaxed of magical beasts? Legendary, delicious and mythical, gurgling through its turquoise sea, between the rocks of Ixinian and the Horn of Aan?

This unicorn of the sea, a wish-giving delicioufish, sought by greedy kings for its delicious flesh which, once imagined, cannot be forgotten. Do not think of its steaks or battered cakes! Or you will be forever lost! No!!!

The Pleasing Fish, an apparently deluded, perhaps, stupid, witless but beautiful creature, appeared in legend, only to the innocent and confused. No certain beast was he! Delivering wishes with a flick of its glimmering fins. Wishes of beauty, grace and stupendous power. Yet all fundamentally useless, at least for the wisher, for, being both innocent and confused, they always screw up the wish or do that thing where they think aloud or say casually "I wish this was all over." and then that's what they get. Such are the tricks and teases of fate.

But yea, the wishes of the Pleasing Fish are well for some, if not for the wisher themselves. Boons to some they are, like how that giant crab someone accidentally wished for ended up feeding the starving people of Ix, (though they gave no thanks for it!). Or how the ability to speak Magpie which another got in error, ultimately resolved the Ninth Hell War and saved uncounted souls, (you won't hear the Hell-Lords say "Oh thanks"!).

So ghosts and dives the Pleasing Fish through the turquoise sea between the rocks of Ixinian and the Horn of Aan, hunted by armadas of taste-maddened Kings. (don't think about the fish-sticks! Don't!). Transiting through the Archipelagos of Mysterious Time, betwixt Dream and Legend, disposing its odd powers to the confusion of the confused and the surprising benefit of the completely-screwed. Muttering its troubles incantations of self, trying to remember where the sun goes at night, leaping up to meet it in the day, searching for vectors for its overflowing wish-power, like liquid lightning incapable of striking the wise.

Until, upon its back, a thud! A hairy foot! A bouncing tail!

And the weight of Bukako the Sorcerous Monkey, wisest of Primates, except for a few!

So began the Adventures of Bukako and the Pleasing Fish. Pursued by Armadas, magicians and elemental hounds across the turquoise seas between the rocks of Ixinian and the Horn of Aan, and through the archipelagos of Mysterious Time....

It is a Nascent Piper of Azathoth!