Scrap has identified an Heraldic Beast.
And in antipodean trickery, answered again with Sorcerer Knights.
And asked,what is this? 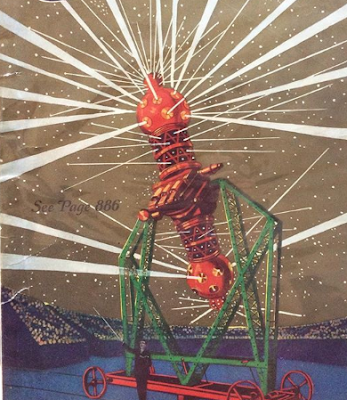 A Stupendous Engine, Vroom, the God who Go-Go-Goes. Here we see the Ark of the Go-Go-Go God being introduced by their Technomantic Trickster Pope; Ultimate Science Guy NOW IV.

A God of amazement, wonder and forward progress.

But, progress towards what?

Vroom was recovered from the ocean deeps as a shifting prism of pure incandescent optimistic light. The Go-Go-Go God  themselves informed its rescuers in how to build its ark, designed both to limit its holy energies and also to project them in a focused way since, in its natural state, the God was making everyone around it way way way too enthusiastic about everything, which did give them a lot of impetus to act, but unfortunately not in a very controlled, planned or sustained way, meaning everything they built or did was kind of janky and barely worked.

Still, so long as it barely, but actually, worked, Vroom was pretty much ok about it and was happy to be wheeled on their unsteady and rickety wheels hither and yon, blasting crowds with pure stupefaction and generally enlightening the world with WONDER.

whence fell this Archon of hope in one of its rawest forms and from what divine hierarchies, we may never know. But as to why it was left behind..

So hopeful is this metallic angel that it can respond only in positive imprecations and optimistic declarations.

Vroom may be a bringer of amazement, but it’s kind of just, amazement on its own. It brings hope in the wonders of science, technology and progress, but doesn't actually tell you how to build any of those things, or tell you anything useful about them.

Hope alone, without substance, is...

Measurably better than no hope at all?

Despite being a bit of a flake when separated from any actually useful work to make the future better or different from the present or the past, the Go-Go-Go God does seem broadly likable, and their worship essentially harmless.

And Vroom is often invoked, or even invited, at the start of major events or projects since they do fill people with a sense of drive and optimism. At any time the Go-Go-Go God may blast forth rays of pure STUPIFICATION and WONDER at what the future may hold!

Now Scrap, what signifies THIS???

It seems to be a Abeyantal Ambassador, a would be an elemental
Posted by pjamesstuart at 04:43