In her Parlour of Doors Mab rests surrounded by portals which flock like birds.
At times, either through mischance, the forgetfulness of the Queen, as product of some scheme or trick, or simply through the tearing and altering of causality around the parlour of Doors, portals run wild like escaped pets, scurrying away, creeping along walls pretending to be paintings or mirrors or simple doorways to other rooms.
Cybermice with special wands and nets chase these doors eternally, trying to contain them and bring them back to the Queen.
Though in theory Mab could open doors to any place or time, her nature (Asperger’s-level obsessiveness), means she will only open gateways to times and places were it is *Evening* and *Autumn*.
The sky will be neither light nor fully dark, some stars may be visible, but not all. Half -occluded alien moons will often hang in the sky. it will never be summer or bright.
The autumn in question could be an  alien autumn, but it has to be a biosphere, or a culture area, where there are seasons, and where the gate-point is currently in between the turning from the bright life-giving season to the dark dead season. The relics of dying life, of whatever kind, falling leaves (though they may be silica substrate, frost and snow (not always of water), may be present, but the place not yet quite lifeless, cold, dark or scoured clean. 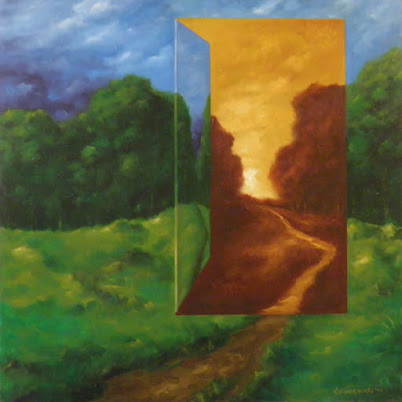 By Ev Niewoehner
Ok so I have a design question for the community
I have a thing for stuff like infinite gateways or doors to wherever. I did a version of this in Silent Titans and somewhat got away with it.
However...
In Queen Mab, at least two of the major NPCs/Monsters/Queens, have this ability in some way. Queen Mab herself rests in a Parlour of Doors and wild doors sometimes escape and drift about, hiding, and another Queen, the Pythian, is a bit like Brunan in Silent Titans, an AI with access to layered virtual worlds.
I like writing this stuff in but it distorts the hell out of an adventure to actually make it workable, or useable. Either I have to create a mini parallel world within the adventure which, even if its good, is not the fucking point of the adventure, or I have to put in video-game invisible walls to say "yes this exists and no you can't use it".
So does anyone have any experience with this problem or has anyone apprehended anything which deals with it *as a problem of design*?
Posted by pjamesstuart at 12:38