[Brief False Machine intermission: Brexit means VAT will start being added to my European orders. On the 4th of January I will export all my current orders to my distribution people, then shut down the store while I try to work out exactly what that means for me. That means when I re-open after the 4th postage will probably be going up.
So if you live outside the UK and want to order *before* that likely postage increase, then do it before the end of the 4th of January.
Ok, thanks for your time.]
...........................................................
The Böggelmen are tall and hairy with rank green fur and red paralysing hands.
Don't let them touch you!
The Böggelmen have squirming bones which bend like branches and round hairless heads exactly the shape of a pumpkin with lidless eyes like mad sharks and pink meaty flesh, like an uncooked sausage. Their head-meat is as wet and soft as raw sausages and they smile with wide lipless mouths full of uneven needle teeth.
The skulls of Böggelmen bend like a babies so they can squeeze them heads into anything, like an octopus in a jar. Same with those long bones, they can come in through a catflap like  cartoon character. Looping and waving is their stride as they walk beneath an autumn moon. 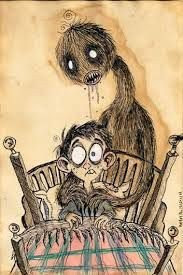 The Böggelmen have paralysing armpit glands. If they shove the sharp claws of their red hands up there and scratch around, then scratch somebody - they can paralyse them, a little like sleep paralysis. Like being locked in a dark dream, half-aware but unable to move. When the paralysis wears off it makes you sleepy, woozy and incoherent, as if you were drunk. If you start talking about Böggelmen in the night, they may not believe you. Maybe you are the only one who knows there is still one hiding in the cupboard.
The Böggelmen like to do these to people who are alone - or people sleeping in a group, they wake one person up and paralyse them, then move about silently and do things in the room with everyone asleep

The Böggelmen love Autumn because the Pumpkins ripen. The pumpkin is exactly the shape of their flexible head and is often carved with faces - which the böggelmen take to be a form of proprietary worship. If a böggelman without a Pumpkin finds a field of them, they will almost certainly carve out one and squeeze their head inside, looking out through two holes. f anyone sees them they may freeze and pretend to be a scarecrow.
(Offerings of carved Pumpkins are one of the few ways to persuade böggelmen to go elsewhere, but more on that later.)
Böggelmen prefer Pumpkins above all things, but if Pumpkins are not available, they will try to wear almost anything that fits around their soft heads - buckets, pots and pans, flowerpots, lampshades. 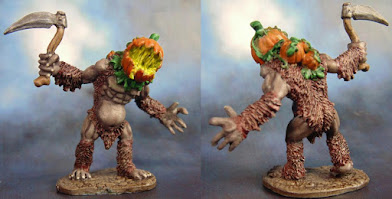 Böggelmen are big and string and sneaky enough to simply take what they want most of the time. They have very few needs and little hierarchy, böggelmen are ranked unofficially by the scares they can create, but this is more of a shifting reputational artistic and sporting system than a form of government.
So it is that the Böggelmen have no real need to terrorise people, they just really enjoy it.
Frightening people, especially children, or other vulnerable people like old people living alone or simple people with no protectors, frightening them to hysteria, madness and then death, is the chief source of pleasure in the culture of the böggelmen. In the böggelmens opinion someone being really vulnerable makes them exactly the best person to be scared.
Not quite a religion, but much more than an entertainment - it is the primary source of meaning in their lives and when they are not doing anything else they sit around talking about past scares they have had, future scares they wish to have and news about scares generally.
They also kill people - they can rip your head right off, but that isn't really the point.
Really expert böggelmen will do more than hide around the house and pop up, they will carefully drive someone totally and utterly insane over a period of time. they know their heads are scary and like to leave the big reveal till last.
Böggelmen don't just scare villagers, (though they prefer them best of all), they will scare goblins and ogres and vampires if they can, anyone really. They are not well liked by other creatures but they don't care at all. 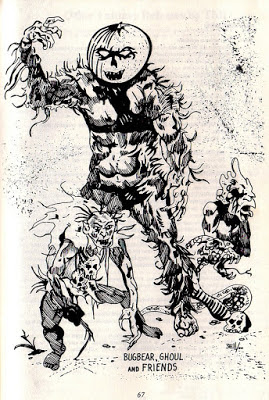 Something Böggelmen enjoy is to fold up their bones inside a big coat, acting almost like a normal person, passing in disguise on the street at night, before revealing themselves.
Even more, they like to drive someone mad with fear and then hide, removing all trace of their presence, so that when their victim tells people they are being stalked by böggelmen, no-one will believe them - everyone thinks them mad or strange and this makes them even more lonely and afraid. Then they are trapped in the house, alone with the Böggelmen, who scratch the walls and tap the pipes.
The Böggelmen love all of this. What a scare!
They don't have any magical hiding powers, apart from being very bendy, very strong and quite clever, (they really like hiding in cupboards, wardrobes and under beds), and stealing clothes, making a mess of things, stealing money and precious secret items. They don't actually care about these things, they just love the trouble, suspicion and anger caused when they inexplicably go missing.
A few böggelmen in the endgame like to tear or cut off someones head and leave it somewhere amazing to be found by their victim (they think of the target of their fear as the victim, in most cases the person who got their head torn off was just convenient for that purpose) - this should hopefully send them totally gibberingly insane, at which point the Böggelmen will come out of hiding and dance around them madly and then possibly eat them if they are hungry, leave them there insane, or thrown them down a well or some similar place.
Yes they have no aim but fear itself, what else can be said about them?

How do they live, and where?
In any deep, dark place, somewhere surrounded by rats and dripping with dank. They do not really care about where they live. Up in a roof, in a shed, hiding in a pipe, hanging beneath the axle of a cart, in a bale of hay, underneath a pile of cabbages.

Since Böggelmen will happily scare outsiders as much as villagers, (they do not really care about the differences), they are one of few problems which strangers and villagers share and can be an odd point of co-operation between them.
A Dracula, for instance, might not wish to admit to being scared to those 'in the know' and could, in a roundabout way, ask the PCs for help with a Bugbear problem.
They are truly an enemy to all.
Gaining böggelmens respect;
- Scares, if you can scare them back, they will be impressed, bow, and leave.
- Free pumpkins.
- Unscarability, if you are impossible to scare they will become frustrated and leave as you are a "dead loss!"
Posted by pjamesstuart at 13:09