Thoughts on this Gundam

First time putting one of these together. Apparently this one is an MSN-065 SINANJU NOE ZEON MOBILE SUIT CUSTOMISED FOR NEWTYPE (TITANIUM FINISH). 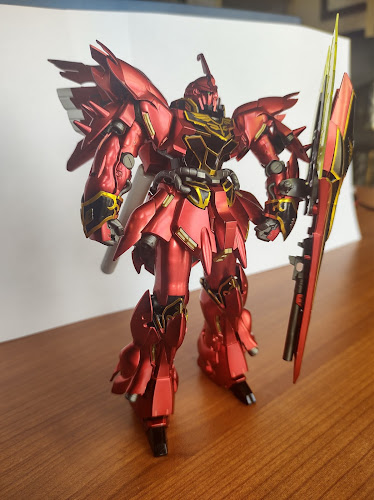 The whole thing is push-fit and largely stays together, (the arms still want to go on holiday a little) which means some really high grade plastic engineering. The whole process of assembly felt super-detailed and like something a huge number of people have put a crazy amount of time and energy into, and also had the slight secretive gnostic-text feeling of interacting with a deep and highly interwoven subculture. 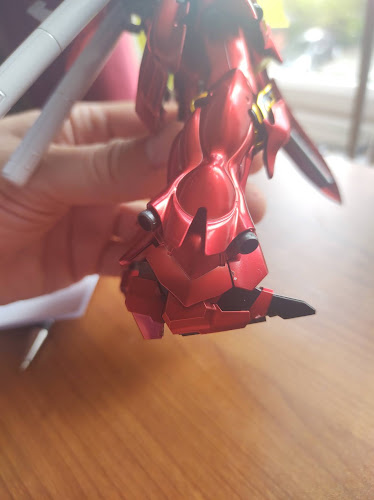 I was looking at the high heels and skirts and wondering but then this person on twitter reminded me that looking kinda femme is actually ULTRA MASCULINE. 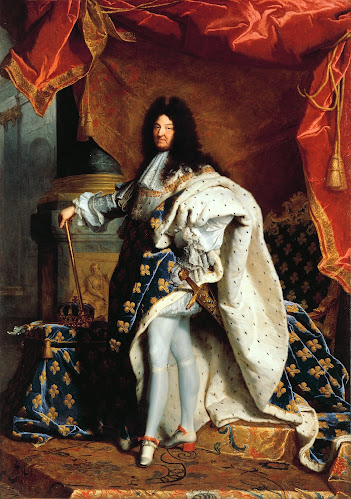 My boi Louis, enemy of Churchills, baldies and heretics to the most Catholic church everywhere
High heels to illustrate firm calves and strong smooth legs, clenched waist to show others your dominant upper body combined with dangerous flexibility, armoured skirt so as not to impede movement,  tall headpiece to indicate magnificence and project extreme confidence. 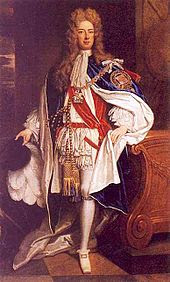 EDIT;
I WAS RIGHT!
THIS IS THE PILOT 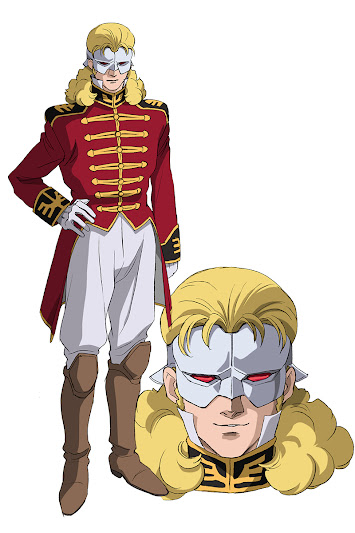 His name is 'Full Frontal' too.
(Thanks to Alex in the comments.)

Of course the Gundam also has WINGS.
Probably is Boccioni had gone into the jet age he would have given his dynamism-angels jet wings as well, they are the most Futurist thing possible.
These can look pretty good from the front, raising up over each shoulder for a head-on rocket angel thing. 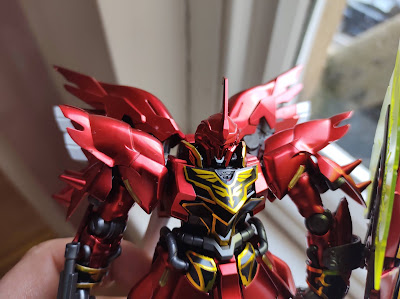 The wings are important because they create this whole new interpenetration with and interaction with space at the rear of the model, and as we all know, one of the most important ways to look at a sculpture is to turn it round and look at the back.
What do they do to the back?
Well they make it a bitch to pick up
I guess the wings are brought out to best effect if you have a stand and you can pose this guy. That way they would essentially create an entirely new and different axis of motion for the figure, making it perhaps, more truly three-dimensional, more of a pure sculpture.
And of course changing its time signature from stepping time or bearing time into fragment time, so in that case, making it more of an image? Which I suppose contradicts my original statement there.
You may need to look elsewhere for a synthesis on Gundam wings.

An aspect of this that was interesting was being introduced to an unknown (to me) form of pseudosense.

Mainly i'm contrasting this with 40k, where I know a supremely insane amount about how the machines of the dark future are meant to work. Here I know absolutely nothing about the imaginative world making up the background of the figure, but I know that it *has one*, so these energy weapons and super rifle (comes in the box) and long white things (at the back) all have specific uses and meanings in the imaginative reality of the Gundams.
These white thingies in particular are fascinating.
(I'm assuming they are fuel tanks or something like that, & they eject at crucial moments in battle for combat-theatre.)
So it has a particular mystery for me where rather than the pleasure of seeing how the form and pseudotech fits into a known paracosm of mechanics and culture ("ah, here is the power generator at the back with the admech skull on it"), for me at least, it is a prompt to imagining more what things *could* be. Interpretation more than recognition.
(I'm not sure anyone has written in a positive way about the artistic pleasures of recognition and ordering, though they must be significant pleasures and a meaningful part of many works).

ORIGINS OF THE FORMS, A NEST OF MEANING

It really is very beautiful.
Where does it come from?
So one part of this is clearly hyper-evolved samurai armour.
Another is this interlacing of the visual signifiers of rocketry. A weaving of cables and implied sources of power with implied transmission of energy we draw from, in this case, late 2th century aerospace tech.
The flow of shapes across this particular Gundam is quite remarkable, for any particular element, it might be said to be;
- Pseudo-Biology. (those forearms are swole with masculine growth, one old standard of manhood was that when the veins popped out on the top of your hands then that meant you ware an adult male, here power cables provide the simulation of those popping veins and tendons).
- Shaped armour carrying the shape of assumed musculature. (See above).
- Rocket Ejection stuff.
- Heat ejection stuff.
- Mechanical Energy Transmission; pipes, cables, suggested fuel reserves.
- Energy Projection. There are these plastic flanges of what I assume to be pure projected energy.
- Pseudo Aerodynamics. arts of this are very like the curves of a sports car, but if you look into it deeply, its not as if the curves are oriented in a particular direction, (& don't Gundam fight in space anyway?) they are more the symbolic curves of speed, high performance and expensive high status engineering, reproduced (it basically looks like a Ferrari robot).
Probably the most interesting thing is where I compare it to this reproduction of Boccionis "Unique Forms of Continuity in Space" (1913) 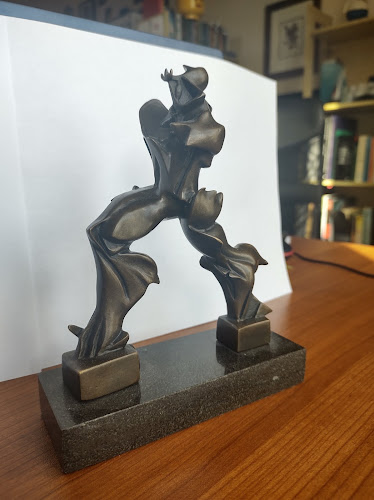 (which I happen to have on me) 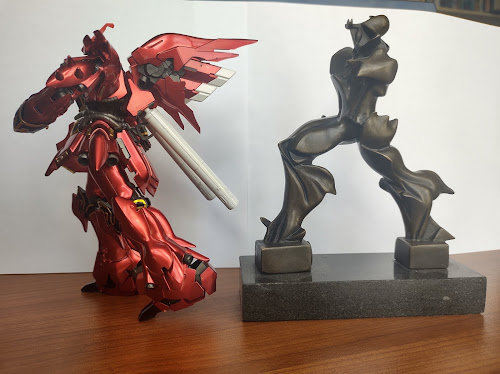 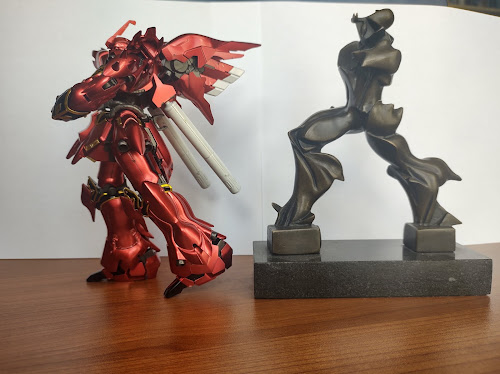 they could almost be related
I'm not sure which is more interesting, the idea that the Gundam designer(s?) deliberately looked at Boccioni first, or that they are a form of parallel evolution.
Masculinity, the machine, speed, forward movement, dynamism, all trying to capture those elements in a still three-dimensional figure.
(They even both have a projecting horn thing).

THE PACE AND FLOW OF FORM AND SIGNIFICATION

The 'pace' or flow of detail and clear space across the surface of the miniature; I read somewhere (Ruskin or Rawson I think), about the use of markings on a curved surface emphasising its wholeness and flow precisely by dividing up the space (like a woman’s stockings) and that might be part of the heraldry here. 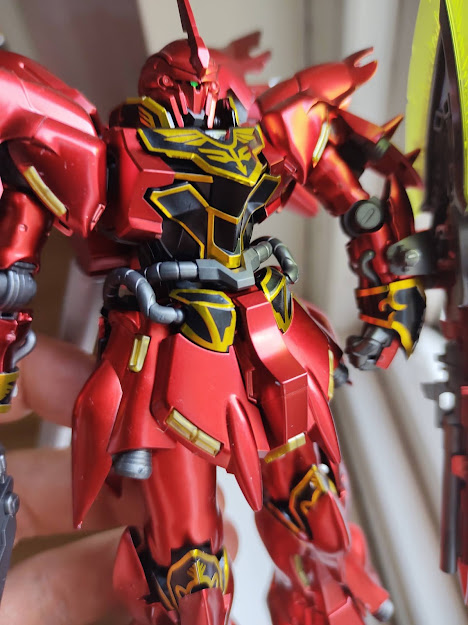 Another might be because the whole model is so shiny  so the curve and space occupied by the form is given to the eye is shown simultaneously by reflection of light wrapping the metallic limbs and by shadow in its curves (as opposed to a more matte version where the shadow would dominate more over the shine).
But the spots of black and gold heraldry break up that pattern of mass-sensing and (though they are actually a bit shiny themselves) compared to the rest of the model they are a bit like empty black spaces, with the shape of the form emphasised through direct shiny gold marking, in essence, creating the symbol of the shape and projecting that instead of just showing you what the shape is.
A little more towards the 'word' than the 'form' more signified (relatively) than shown. 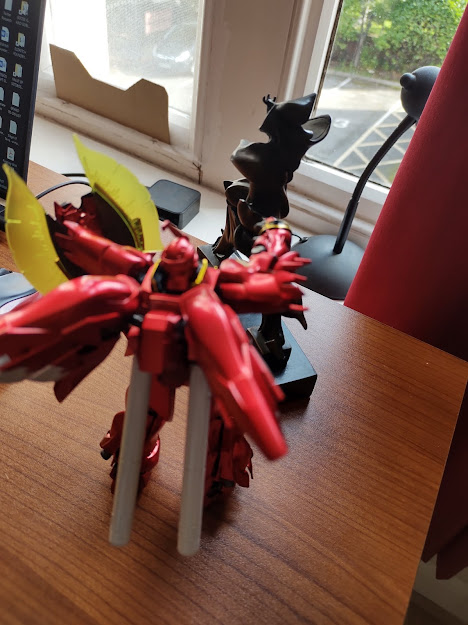 "Brother, do not abandon me!
"torna al tuo scaffale, cesso."
Brother we are on the same shelf! Noooooo!"
Posted by pjamesstuart at 04:26