Reading through a book about the back-parts of the Beowulf manuscript; a truly strange beastiary, even by medieval standards. It is pleasingly mad and incoherent but in a sad failure of Gygaxian energy, it is not systematised, therefore how can it be used in D&D?

So, I have soft-of Alphabetised it here.

(Its an adaption of a translation of a fire-damaged manuscript so this is very much my version).

Thanks to 'Inconceivable Beasts, The Wonders f the East in the Beowulf manuscript by Asa Simon Mitman and Susan M. Kim.

Ants, as mickle as hounds, they have feet like grasshoppers, have a red and black colour and dig up gold from the earth from before night until the firth time of day. Those who are bold and would that gold take, lead camel mares amid foal and stallion. The foal they seal up before they fare over the ford. The gold they tie fast on the mares. They sit astride and the stallion there leave. When the ants find them and are busy with the stallion the men with mares and with gold over the ford fare, they are so headlong in this they would think they do fly. 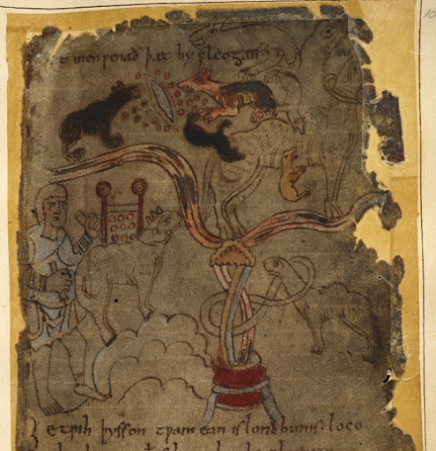 Asses, of Babylonia, these have horns as big as oxen.

Beasts, Inconceivable . Those beasts have eight feet, Valkyries eyes and two heads. If any man will latch one them then they set fire to their own bodies.

Catinos, a race of wild beasts by the sea who are very beautiful beasts.

Conopenas, half-hounds with horses manes, boars tusks, dogs heads and their breath is like the flame of fire.

Corsias, pepper-guarding horned serpents. They have horns as big as rams. If they strike or stroke a man he wilts in death. In their lands south of Babylonia lands there is pepper indeed. They guard the pepper in their eagerness. One takes the pepper by lighting up that place with fire, then down into the earth the serpents flee, and so the pepper is made black.

Dragons, they are in length an hundred and fifty feet long. They are mickle as great stone pillars. For their mickleness no man may easily on that land fare.

Hens, Red. Born like those with us of red hue. If any man will grab or touch one, they burn him all to cinders. These are inconceivable witchcrafts.

Men, (hospitable). In the left part of the kingdom which the beasts Catinos are ins, there are hospitable people, king, who have under them many tyrants. Their boundaries are near the sea. From there from the left hand part are many kings. This race lives many years and they are a generous people. If anyone comes to them then they give him a woman before they release him. The Macedonian Alexander, when he came to them was wondering at their humanness, nor did he wish to kill them nor do any harm to them.

Men, Donestre. They are grown like soothsayers from the head to the navel and the other part is like a man, and they know men's speech. When they see a man of foreign race then they call to him and his kinsmen the names of familiar men and with lying words they bewitch him and get him and after that they eat him up, all but the head, and then sit and weep over that head. Men, Fan-Eared. In statue fifteen feet long an [unknown] broad. They have a mickle head and ears like a fan. The one ear they by night under them spread and with the other they cover themselves. Their ears are very light and bodies as light as milk. If they any man in that land see or perceive they take their ears in hand and flee swiftly, so headlong you would think they fly.

Men, Gewende (Imagined/Transformed) Men. Born in three colours, their heads are maned like lion heads and they are [unknown] feet tall and a mickle mouth like a fan. If they see one man in those lands, or any man will follow them, then far they fly, and blood they sweat.

Men, Homodubii (gentle), They are up to the navel in human form and afterwards in the likeness of an Ass, and they have long legs like birds and gentle voices. If they any man on that land see or sense then flee they far.

Men, Homodubii, (bearded) - they are a doubtful people -, six foot measures in length, they have ample beards to the knee and hair to the heels. By raw fish they live and eat them.

Men, Hostes. Beyond Brixonet are men born long and big, they have feet and legs twelve feet long with breasts seven feet long. Hostes they are called, for sure whatever man they grasp they eat him up. 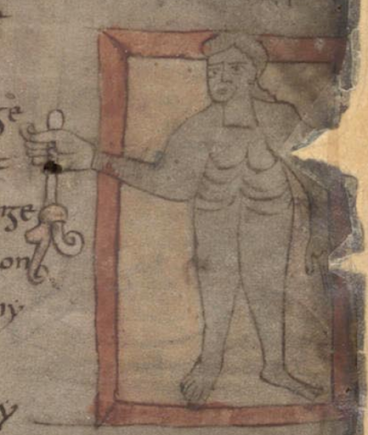 Men, Lamp-Eyed. On a certain island people are born who their eyes shine such light as should light a mickle lamp in dark light.

Men, of Ciconia. Fifteen feet tall, with white bodies and two noses on one head, feet and knees scarlet-red, long noses, dark hair. When they wish kin they take ship to India, there they bring children into the world.

Men, Sigelwara, There is a race of man, they are of a dark colour in countenance. One calls them Sigelwara.

Men, without heads. They have on their breasts their eyes and mouth. They are eight feet tall and eight feet broad.

Quietus, the most still-souled Bishop who no other meat will taste but sea oysters and by those he lives in a temple of iron works and of pressed glass made in Beles days and Jobs at the same place as the suns rising.

Serpents, two headed, the eyes of which burn as brightly as lanterns. 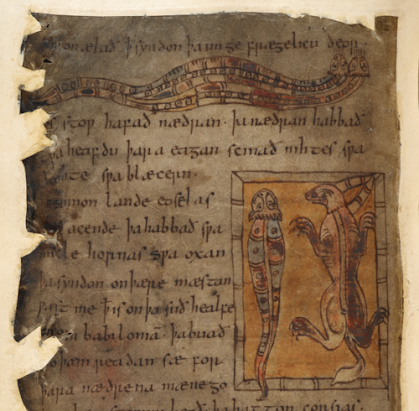 Sheep, of Archemedon, as big as Oxen. Dwelling in the Medes city, Archemedon.

Women, Boar-Tusked. They have boars tusks and hair to the heels amply and Oxs tails on the loins. These women are thirteen feet tall and their bodies have the hue of marble and they have camels teeth and asses feet. For their mickleness they were killed by the great Macedonin Alexander, he killed them when he could not capture them while living because they are shameless in body and unworthy.

Women, Cat-Hunting. Woman who have beards as broad as to their breast and a horses hide they put them on as clothing. They are called great huntresses and instead of hounds they bring up lions and tigers and lynxes, they are the boldest beasts and they hunt with them.

Email ThisBlogThis!Share to TwitterShare to FacebookShare to Pinterest
Labels: I read a book, Monsters