the noise in which it lives

From "African Folktales - selected and retold by Roger D Abrahams"; 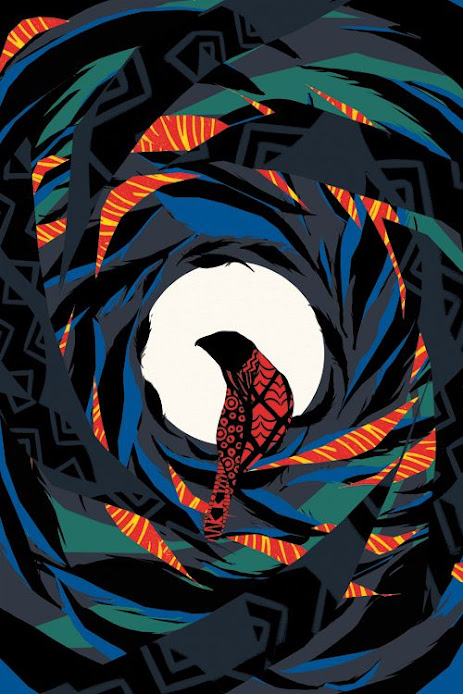 Unfortunately, this quality of immediacy in an African story, including the noise in which it lives, is very hard to capture on paper. Among the attempts to record storytelling as it occurred at a specific time and place, and to record it in such a way that the other major situational factors are also conveyed, it is, perhaps, Laura Bohannon's "anthropological novel" Return to Laughter, describing her work among the Tiv of Nigeria, she provides us with a description of a tale-telling scene which, though not wholly characteristic of the look and feel of a usual storytelling - the scene occurs after a smallpox epidemic has passed through the village - is nonetheless especially vivid. Her description focuses not on the stories, but rather on the noise out of which the performance emerges, and the performers mastery of the tumult. She dramatizes the way in which the immediate situation is drawn upon in the stories and wedded to their universal qualities, and how the continuities and the interlayering of voices may be seen to work together in an actual performance context.
.......................

"A few nights later we sat under the cold moon of the harmattan in a circle in Kako's homestead yard. My pressure lamp was carefully paced, under Kako's personal direction, to illuminate the storytellers as they passed before us and the assembled elders. Gradually the people gathered from the neighbouring homesteads. They brought their wives and children, and the bought wood for the fire and stools to sit on. The homestead was full of preparatory bustle as people borrowed coals to start their fires and jostled each other for a place close to the front. Then, places staked out with fire and stool, people circulated to greet each other, as people do in a theatre lobby. The air was filled with happy hum of an audience sure of good entertainment.
Behind Kako's reception hut there was a great deal of coming and going, whispering and giggling, very much like the noise of people plotting charades. Cholo, who was to tell the first tale, squatted before us in brief, friendly greeting and gave me news of his sister: Atakpa was well; her co-wife had been blinded by smallpox. "It makes more work for Atakpa. They're both after their husband now to get them a little wife to help."
"Cholo!"
"I'm coming." Cholo shouted toward Kako's reception hut. He glanced at the gathered audience and left. he waved Ihugh to join him. Soon Ihugh was running towards his hut, consulting with his uncles, and then back to join Cholo behind the reception hut. people settled down to wait, with anticipation.
Cholo came out before the lamp, and, with many gestures, began the story of the hare and the elephant.
The hare went hunting one day. He armed himself with a club made of cane grass and, knowing his weapon weak, wore a ferocious mask to petrify his face with fear.
Here Chlo began to sing, stopping to instruct us all in the chorus of his song: nonsense syllables with a rousing rhythm and a lilting tune. I got interested. This would be far more fun than mere storytelling.
First the hare met a mouse. The mouse screamed with fear when he saw the terrible mask, but instead of standing trembling and ready to the hares club, the mouse turned to flee.
Again Cholo waved us into the chorus.
As the hare pursued the mouse, his mask slipped down over his eyes. But the hare has long ears, and he was able to follow his prey by the rustling in the dry grass. In his flight, the mouse ran straight into an elephant and the elephant also began to run. The hare, unable to see, now followed the elephant and beat him with his cane club. The elephant, thinking this was the tickle of the mouse's whiskers, ran ever faster.
Again the chorus. Then Cholo disappeared. I had enjoyed the song, and prepared for the next story. But this one was not yet finished. Cholo returned. This time he was the hare. To his head he had tied two waving fronds as ears, over his face a cloth daubed with mud, and in his hands a weak blade of cane grass. He mimed his story, dancing before us, searching for game, finding the mouse, and pursuing it blindly.
Then out came the elephant, roaring: a long bed tied to a man's back - those huge, splay feet could be no one's but Ihugh's - covered with two dark togas that swayed with the elephants dancing. The youngest children screamed most satisfactorily and had to be comforted by their parents, while the older children told them with great superiority that the elephant was really a man. Cholo now struck the elephant boldly with his grass blade, used it as a bat to wave us all into his song and chorus. One or two of the young men beat sticks against their chairs, the better to mark the rhythm while the hare and the elephant danced. In a final surge of enthusiastic singing and dancing, the hare and the elephant disappeared.

Bohannons description of an actual performance underscores the fact that the vitality of the storytelling lies in two characteristic elements: first the seizure of the role of narrator and the maintaining of it in the face of ongoing critical commentary; second, the constant interaction between storyteller and audience, maintained both through audience commentary and the periodic introduction of call-and-response songs. Thus, the occasion of storytelling calls for the same seizing of the centre, and the same kind of voice overlap and interlock as do the many other forms of audience behaviour taking place in front of the performer, who, through a sense of personal control, provide a focus for all the noise and random bustle arising on occasions of performance.
..........................................
And if you liked that and want more, get all over this.
Posted by pjamesstuart at 02:47