A Review of Through Ultans Door

Someone did a proper zine. One actually *worth the money*.

This is by Ben L of Mazarins Garden. You can see the interview I did with him here;

Its based on a real persons actual game with actual real playtesting and everything. In form its an introduction to his Dunsanayan City of Zyan, which floats in Wishery. In true Borgesian literary style it actually has an un-named sub-city which takes the place of the PCs starting culture, this city described only through inference in the description, rumours and reasons.

This first section of the Zine tells you about the door itself; a local printmaker finds a doorway to a mythical kingdom in his cellar and starts charging for entry, gives you background about the base cultures knowledge of Zyan, the city to which the door leads; semi-mythical, magical, dangerous, wealthy, decadent, a handful have gone and returned with riches. Gives you some rumours about what the door and a nice Reasons table, an increasingly common thing in OSR stuff, in which those who don't just want to go git treasure have some fancy contextual reason for rolling about in magical realms.

Monetary values and stats are given for those people who just have to steal from or fight the quest giver and tank the whole fucking adventure before you even get into it. This is a thoughtful touch, but thoughtful in the way that a sympathetic apology sign on a submarines escape hatch is thoughtful. It's nice someone considered it but if you need to make use of it everything is probably boned anyway.

The rest of the Zine is essentially a single dungeon beneath Zyan with 30 keyed areas, two major factions, a variety of ways in and out, individual treasures and monsters, and a whole heap of contextual information about the cultures both above the dungeon, in Zyan, if you leave and go up, and below Zyan, in the white hanging jungle, if you go down.

The format is notable because it takes advantage of the nature of Zine production ins an elegant, efficacious and practical way. (Elegant is going to be an overused word here as the whole thing carries signs of care and careful thought at every level of its creation, largely to the good and in micro ways possibly to the bad).

The card cover comes away without staples, the dungeon map is on the inside. There are two separate 'menu' cards with all the random encounters and pertinent rules on them. All of these are light and slightly narrower than A5. if you imagine running this thing you would have the map open in front of you, the encounter table present and then would simply have the zine itself open to whatever number or room was required. As a whole this is exceedingly well-arranged for use and should absolutely be copied by anyone with the same aesthetic and/or resources/mental model/way of doing things.

There could be some minor, arguable, downsides to this way of making things. More on that later.

Most, many, possibly all of the OSR design fetishes are in place. There are Jayquayan Loops. Traps that make situational sense and which can be detected with careful thought, and disarmed within the theatre of the mind. There are two factions, either of which could be 'bad', but one of which is more badderer. The dungeon has cultural and geographic strata, rooms have former uses and current uses, understanding the culture of the former occupants makes actual sense and can get you things. There are hidden uniforms. One faction can be imitated (poorly) with makeup. There are three ways out, one of which looks like it will involve you further in Zyan above, for a city adventure, another will take you down for a strange jungle adventure and the third is left vague for whatever the DM needs. There are TOILETS and a source of fresh water, as well as a semi-realistic ecology.

The tone of creation is on the darker side of Dunsanay and the lighter side of the Aesthetics of Alienation that features a lot in parts of the Artpunk OSR. The wandering monsters are White Swine with child hands and murderous Shadow Puppets. They are all pretty good, make situational sense in the imagined world and their particulars are well taken advantage of, (the enemies of the White Swine pickle and eat their child-hands, so if you find their larder without seeing the Swine first it will look like they are eating children, an unusually Raggi-esque negamove from Ben).

All of the treasure is individual, unique, inventive and appropriate to the setting. I've begun to think that treasure of this type is the 'Deep Roast Coffee' of Artpunk D&D, from the Malcolm Gladwell story in which an audience asked about its coffee tastes always says that it favours a Deep Roast over a Mild Smooth Blend, because the words sound better, then if you actually test them, they all want the Mild Smooth Blend because the Deep Roast is fucking strong.

It's really really great to have these lovely individual treasures, especially at a low level, and especially in the first few dungeons. I think as people level up and end up with a plethora of crazy stuff they begin to forget or ignore a lot of it.

But none of this is any real criticism of Bens work here, only a general observation. (He does have a +1 weapon in here though; SHAME - whip yourself five times a say a Hail Gygax. (It also has a specific magical effect though.))

The use of magic is elegant (again). Most magical effects are situational re-skins of common low-level Old School spells, so the DM will likely be familiar with the effects, but they are shaped to context and use and will therefore *feel* different in the game. This is a neatly-executed idea.

The art is waaay above zine-level. There is one Russ Nicholson piece, which should maybe be reproduced smaller than it is, several by Huargo Illustrador which are very good, (the cover is EXCELLENT), and a few by Gus L, of which my favourite is the White Swine. Gus also did the map which is largely very good. I would probably have had more hashing in the negative space but this could be considered a matter of dungeon map aesthetics.

The dense cultural and aesthetic integration of the imagined world (which is probably what most of you are paying for) means that the zine only really mixes neatly with one other thing, and that's issue two of this zine, which probably will not be out for a while.

You can make up your own Zyan above and Zyan below, but when issue two comes out the dense interweaving of detail is going to make it tricky to integrate the developing world with whatever you are playing.

This is only conditionally a flaw.

Ben writes like an academic or an uncles letter, in full paragraphs with entirely correct sentences and continually-even grammar. All the information you need is there in the paragraph and all the information is good. I personally would have chopped the shit out of a lot of these paragraphs, hacked the grammar, broken up the text, bolded, headed and bulleted the fuck out of it.

Bear in mind this is a highly personal viewpoint.

I will give you an example;

"a. A four-poster bed stands in this room with a gutted mattress, and a few tatters of shredded bed clothes. Attached to the wall, there is a tall mirror that has been smashed to pieces. Next to it stands a once fine armoire now scratched by claw marks and ruined. It has a hidden compartment in the base, holding a gorgeous carved wooden cask (50gp), within which there is an effigy of a golden web. If thrown it acts as a web spell (one use)."

Hidden in the Armoire
Compartment in the base. Gorgeous carved wooden cask (50gp).
Inside - effigy of a golden web. Acts as a web spell if thrown (one use)."

Again, this is a matter of informational taste and preferred cognitive rhythm. I did call this section 'nitpicks'. (Also, note the treasure, the cask, has a coin value while the magical doohicky doesn't, therefore meaning you don't need to have any arguments about throwing away the magic treasure or do any dicking around after the adventure about what exactly counts as XP.)

It's De Tocqueville vs Disney. This is almost the platonic ideal of the Artisinal Zine. It could only be the product of an intelligent, well-resourced, careful individual with good taste who took a long time and much research, invention and playtesting to produce it. It's particular right the way from its dungeon treasures all the way to the paper chosen and folded by hand to make it. Even the format and the way the paper is arranged is an elegant (AGAIN) arrangement of information and aesthetics that could be only be made easily by one mind who both comprehended and *physically created* the whole thing as-one.

It is not a work of industrial art. I don't think you could produce this at a large scale and keep all of the good things about it.

Not that you should necessarily want to do that. De Tocqueville has his good points, and Disney certainly has his bad.

It’s a small gem. If you like any of the things it’s about then it may be a 5 out of 5. Even if you hate the subject it would have to be a reluctant 4 out of 5 just for the very obvious quality. It has probably sold out by the time I have written this. 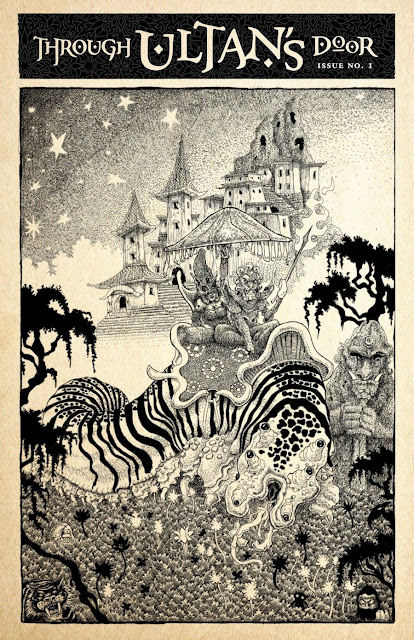 I will now watch Bens review of this, which I have been putting off, to see what he says.

(He’s right, the room numbers are a bit small.

And he mentioned Matt Hildebrand the layout guy, which I did NOT do. Whoops.

Also he points out that its available in PDF which arguably contradicts my point about Industrial Art.

And yes, there are a handful of spelling errors. I forgot where they were. Sorry Ben.)

Scrap and I's, much scrappier, much shorter, but not that much less-expensive Zine can be got HERE, if you want it. 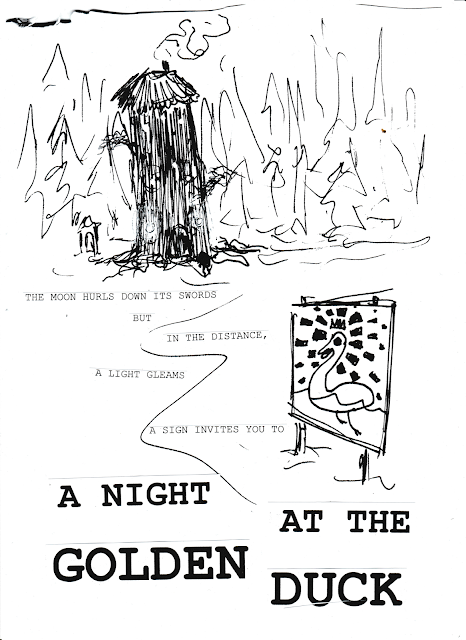