The Wodlands 8 - The Necropolis of Glass

1. The Plains of Aesthetic Fire.
2. The Antigoblin Empire.
3. The Whetstone Ridge
4 The Painted Plane
5 The Vermillion Sea
6 The Large Goblin Collider
7 The Wodlands 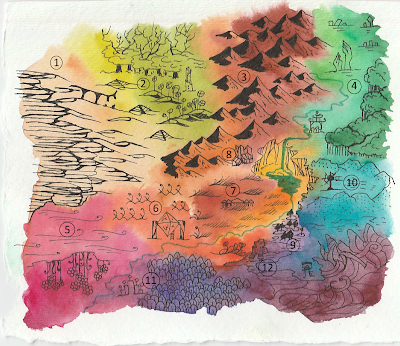 North of the Wodlands, between the Drops of Ink and the Whetstone Ridge, is a city of silent tombs, glass pyramids and sheer mountains of artificial crystal. The streets are clear, clean boulevards of pure white sand and smooth glass grains. Dawn rises each day on a city swept precisely neat. Hidden in the crystal hills are mirrored labyrinths, antiseptic mazes full of reflected shadows wrapped around the hidden Krystaphagi of the Illusory Lords whose tombs these are.

In daylight, from mid-day to eve, a Grand Goblin Market fills the streets. The enormous, perhaps incalculable danger of the Illusory Lords makes the Necropolis a near crime-free and neutral trading place. The horror and certainly terminal death of leaving as much as a handprint or stain on the surface of a Pyramid, equalises all. The stalls are set well back from the glass walls, narrowing the walkable space between. No-one litters, out of fear. Trading opens at noon (on bright days) and as the evening begins to fall, stalls shutter, traders flee and the Necropolis empties once more. By night the place is dead.

From the Wodlands come criminal Goblins trading sticks, tricks and lockpicks. From the Ridge come pigs and uncomfortable Pig Knights. AntiGoblins from their Empire, in glass howdahs or containment chairs. Bedouin from the Anaesthetic Plains. From the Vermilion Sea come Invisibeetles, PenumBeetles from the Umber Woods, Painted People from the Painted Plane and others from the Reach and the Imaginary City. And of course, more Goblins. Goblins everywhere.

Who lies within the mirror'd tombs and fills the Krystaphagi? Who requires such monuments and provokes such fear.

The Imaginary City, far to the south, past the Wodlands, can be governed only by Illusory Lords. Pinned in place by feigned constructed tyrants, unreal kings. Also named, in common parlance, the Conspiracy Kings.

Exact details of the Imaginary City are for a later record. Know that it is a place where nothing is ever happening *now*. Politically, there is no now. Things have happened, they will happen, are expected to happen, but there is no moment where they *are* happening.

Things begin as the forces of the old regime begin to spiral out of control. Denunciations, corruption, beheadings and tabloid journalism proliferate. Slowly things become intolerable.

The concept of the revolutionary leader must emerge, and be emergent. It cannot be centralised or planned, must come from the people, from rumour and myth.

At first, actions and qualities are assigned to them. They are intelligent, reclusive, with radical new  ideas. They are fearless, neurasthenic, perhaps they like oranges. They are a revolutionary, or a counter-revolutionary. They head a minority faction, they act from the shadows, they have a plan. But at first, nothing is found. Then, evidence come to light. They are placeless. The forces of the old regime seek them, but they cannot be found. No-one has seen them directly but there are distant reports. Then third-hand accounts -  a friend of a friend saw them in a public place. They were here yesterday. They are in the next street, in the next building. You hear them moving in the next room. The door moves.

But now, a now that is no now, it is already too late, the revolution took place yesterday, or the day before. There was chaos in the street There is a new regime now, they make laws, their face is on coins, stamps and post-boxes. The old regime must be deposed of, secured, kept safely away. Taken to the necropolis and buried, non-existent, but alive.

The old Illusory lords are very difficult to kill (being unreal), Tyrannical, powerful, and  hard to keep dead. In fact you need to build a giant glass pyramid full of mirror mazes and light, shining cubist reflections wreathed in diamonds, chained in diadems of diadems just to keep them slumberous and sleeping through the days they don't exist in. Then when it's dark & shadowy, or just very overcast - they can get wakeful again and wander around.

Meanwhile, in the Imaginary City, slowly, the new Illusory Lord goes insane, making ever more incoherent demands, acting as a tyrant. And in the shadows, whispers come of a new king who will depose them for their crimes.

All the Illusory Lords are revolutionaries from conspiracies of 1.

Some names of recent, now-entombed, rulers;

Diamonds usually, legends say some floors are carpeted with them. There are also rare resins, sunstones, fragments of eternal and un-meltable Ice, glass fountains spewing bubbling pools of clear magical water, rare jellyfish, cellophane, calcite crystals, occult lenses, bountiful hordes of magical mirrors of every kind and the regalia of the illusory lord in life.

There are also legal documents, seals and manifestos. Adventurers might be asked to risk the tomb simply to confirm a will or bequest, end a long-running court case, clear an inheritance or even free someone from prison.

Many of these quest-givers are thieves trapped in well-guarded mirrors. Over time the crime lords of the Imaginary city have come to be made up almost entirely of these trapped adventurers.

All of them were trapped in the mirrors after failed expeditions into the Necropolis. (Of course entering a Pyramid is insanely illegal in every place, especially the Imaginary City.)  They were carried out by friends or allies and snuck back into the Wodlands or the Imaginary City itself.

They say it is pretty freaky in the mirror verse and they want out. Things are ok near the event surface but increasingly weird and troubling the further from it you get (like a boring but distressing parallel world).

Finding themselves in a precarious, delicate position, and unable to turn to the law, these resourceful individuals always end up turning to crime. Eventually, over time, their alienation from three-dimensional mankind, and their enormous vulnerability to being shattered, turns them into wrathful and dangerous killers, exterminating any even slightly potential threat before it has a chance to harm their mirror.

One of the only ways to escape the mirror might be to have someone attempt the same expedition that trapped them, avoid the traps, survive the pyramid, discover the secret to releasing them from the mirror-verse, and return it to them.

But few would willingly undertake such a mission, and so manipulations are engaged in. The mirror-men are not always behind every attempt to penetrate a Pyramid, but if one is organised, they will soon infiltrate it.


DANGEROUS SHIT IN THERE

Silhouette Machines - These can tear an individual apart or make their existence dependant on a strong light and  flat nearby surface.

Shattertraps - The commonest trap in the Pyramids. These stick you in a mirror which then tips over and breaks apart. Many individuals are caught by the trap, but the mirror saved from breaking by their friends. Whether this is a mercy on their part can be debated.

Saline Golems - Huge, smooth, slow, salty and non-infectious, the Saline Golems may be what carefully clean the streets of the Necropolis in the night. Their shape is tubular, humanoid and whacky, but difficult to spot, except for their fingers which are blunt trapezoid blocks which flash like prisms. Moderate contact with a Saline Golem can help cleanse wounds. On extended contact they fill the bodies ventricles and blow them open like bad pneumatics.

The Spritzenmann - Maybe the most awful and frightening creatures who guard the pyramids. These are silver needle automata, whose limbs and bodies are needles as fine as a hair. They stride, plinking along and jab frantically at anyone who breaks the rules.

Fighting them is terrifying as they can hardly be seen and extremely deep, microscopically narrow puncture wounds appear on the body with startling rapidity. The Spritzenmann themselves little but a hard to define blur of lines in the air. Grabbing them is like grabbing a long steel needle that hates you and lives. Their mass is so slight that blows only knock them away. If bent they scream and freak out.

They seem to both hate and fear living things and the staccato, spastic flailing of their raging and frightened needle limbs only adds to the terror.

Snakes in the Glass - Simply large glass snakes, that live in glass as if it were grass. Some of these may not even be aggressive but since they are almost impossible to see, one can step upon their hiding place and disturb them without realising. Then a huge anaconda like a mad chandelier bursts out of the smooth wall as if it were water and takes you down.

Guillotine Guys - Men made of eternally falling heavy glass blades. Like doorways torn into a dimension of transparent cleavers. Whether they mean to harm is not known. Touching one is disaster, embracing one is certain death.

Drowning Rooms - Tall rooms with invisible ceilings, or false ones, filled with utterly clear, utterly still water. The walls and door are glass. If the door is opened, the clear water flows out into the clear glass corridor and drowns anyone there. Trying to work out if an unopened room is actually huge and full of clear, still water, is a serious challenge in the Pyramids. The Sprtizenmann love these rooms.

Email ThisBlogThis!Share to TwitterShare to FacebookShare to Pinterest
Labels: The Wodlands