A Review of The Gardens of Ynn by Emmy Allen 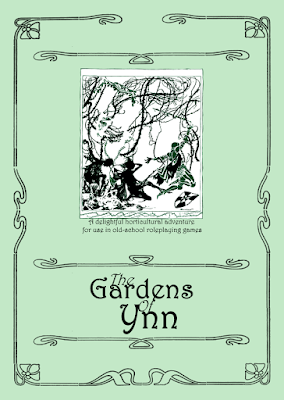 By Emmy Allen
Her blog, Cavegirls Game Stuff is on the right.
Click through image to buy.

Ynn is a Tea-box, a name I just made up. A sandbox or procedurally generated setting in which you are equally likely to be offered tea as to be attacked. I was also going to call it a Civil-box or Mannerbox.

So instead of it being Points of Light where civilisation is encroaching on, or receding from, the wilderness, its a world where the products and structures of high civilisation exist in a degraded, twisted or transformed state. You might have a fight, you might have a polite conversation.

The only other things like this (that I know of) are R&PL and the garden bits of MotBM, though they are a lot like this. If you liked those elements of those books then you will certainly like this. 'Scary, Alienated, Dangerous Fairytale with weird fiction elements'.

There are lots and lots and lots of event and encounter-linked subsystems for specific strange effects. The balance of mutation, alteration and effect-acting-as-strange-boon is pretty much what you would expect from the OSR/Artpunk scene. Expect to go mad and get mutated and leave with a freaky treasure that might be worth something and does one highly-contextually useful thing in a session in someone else's game in a years time.

We have tables at the end for mutations, treasure, searching bodies and flowerbeds, food stored and found, rumours, dreams and portents and a Ynnian changeling class.

I did enjoy the fact that the Puddings in the game were actual puddings. As in different physical natures, tactics and demeanours for trifles, Black Forest Geteaux and huge Brownies etc.

By the powers invested in my by a bunch of Sycophants and HATERS, I hereby call time on the Gygaxian Pudding. It was dull. All pudding will now be actual animated giant predatory confectionery Ynnian Puddings. Let the message be passed.

Ynn is easy to enter, and easy to leave if you do so quickly. If you stay too long, you are trapped and the only way back out is to go Heart of Leafy Darkness and get deep to find the door.

It would be simplicity itself to drop into any OSR/Artpunk game. So long as gardens exist somewhere in the world, or even if they used to exist.

There's no hard quest or central prompt to force you in. I doubt that would be a problem for 90% of purchasers as we are either integrating it into ongoing worlds, have curious, treasure-obsessed players and PCs or are used to adventuring settings, and making settings adventures. But if you are not of that ilk, then no, there is no big story and no big quest and so, perhaps, for you, no point.

Its serviceable. For the value, its good. The art choices are all public domain and are well made, with more depth of knowledge than I would have. The layout is functional and effective.

There are lots of very low-level errors like spelling mistakes and strange rule artefacts that refer to other minor rules that aren't there, art is slightly dulled and pixelated by the Lighscource process and there are other little dabs of layout error or imperfection. None of this is the kind of stuff that should prevent anyone who commonly reads this blog from using it in any way.

The generation system is based around a d20+ roll in which you generate places, circumstances, threats and opportunities based roughly on how deeply you have gone into the dimension of Ynn.

Without any deep at-table testing, taken purely as information, this seems like it would work well. 35 places, 35 details and 35 living encounters means a nice mixture of randomness (I think 42,875 possible combinations?) and a sense of growing strangeness, alienation and danger which increases the deeper you go.

The structuring of the world-generating information, the use of the d20 and its relation to the fluctuating, unreal and sometimes repetitive nature of Ynn is very elegant. This is another world which has been made alien in precisely the way it would be required to be generated by a die roll, a good fitting between dice generation, world-concept and game-ability.

(The basic format could easily be stolen and adapted, but most places made would have to be unstable 'perpendicular worlds' like Ynn I think. Probably there are a shitload of those unstable maze-dimensions hanging about.)

I *think*, the only set doorway out is at detail 34, so you need to go at least 14 levels deep to get out if you get trapped but lucky rolls and secret ways might shorten that distance. Conversely, if you go deep enough and spend enough time wandering around its almost inevitable that you will *eventually* find the way out.

So in conception and execution its elegant.

I have not tested this in play but *for my preferred cognitive load* the book is in an awkward spot between something you could easily and quickly use at the table and something you would generate ahead of time.

A challenge there is that the book concept is one where you are meant to be generating at the table and where the structure of the imagined world and some elements of the process of play assume this.

First a d20 roll for a location, then a d20 roll for details to apply to that location. That's two flips. Many of the location and detail entries are simple enough that I could combine them quickly on the fly but some are complex enough to require sub-tables or complex information or aesthetic relations. In those cases we might be more into 'wait for a few bites of food' time.

These also have to be recorded, so that would take a moment for me as well.

You can pause there for a little period of game time and introduce the area but in most circumstances you will be rolling for an event, even a quick one, or one provoked by searching, relatively quickly.

The events range from environmental effects, unexpected and possibly advantageous links between places and living things. The demeanour and relation of the living thing is set by the event, which saves a reaction roll and gives a more specific and organic range of postures for living or active beings to be encountered.

Then if you get a living being, you will know some of what it's up to from the Events chart, you then roll another d20 on either the night or day encounter charts.

By the time you get deep into Ynn I would be throwing a few cans of beer on the table and saying 'down that, be back in 15'.

I asked online how people who *have* used Ynn at the table got on and results were largely positive.

So possibly I am just stupid and maybe you get better at combining stuff as you get familiar with the book, which is a problem that solves itself in some ways.

Ynn would do very well as an App, for a phone. The short text elements, the numerous sub-tables and the fact that most end-results can be presented as about three shortish paragraphs (one all the results have been created) would make it perfect for some kind of fancy digital generation tool. The tool could also keep the changing 'map' of Ynn in digital space quite easily. You could swipe laterally for the elements of the place where you are and swipe up and down to go in and out.

You could also do an A4 "Ynn2" with original art and results linked by page to produce less diversity of result than the sequetial process but much greater ease of combination and relation, if you wanted to go for the high-status Ennie-Bait route.

And if you cut it down and re layed it out, you could bring it down to about Into the Odd size, a stapled A5 book, and sell it at Cons and via mail of you wanted that route.

There's some kind of equation where you take into account the resources that were dedicated towards a piece and its price and assign it a value relative to those two things. Gardens of Ynn is in the zone of 'Max effort for one person with no extra resources using PoD printing'.

Metzgers the Nightmares Underneath is a similar product with somewhat higher production values, it also costs a shitload more and, like I said, Ynn is $3.00, and for the information contained within, if you are of its taste, a very high-yield book.


(Also I really need to work on a new aesthetic.)
Posted by pjamesstuart at 13:10