A Review of Orality and Literacy by Walter J Ong 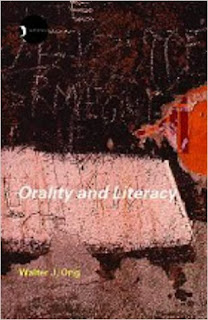 The book is about the shift from an oral culture, one without writing, to whatever our modern one is, usually called literate, where almost everyone can read and reads continually but we also use orality all the time as well. It looks briefly at whatever the new orality will be, the world opened up by first radio, then television and the internet, in which speech, sound and rhetoric re-emerge in new forms, now combined with methods of recording and projection that effectively turn them into new things.

We start with an analysis of the oral origins of language and of the perhaps necessarily destructive state that lies between Orality and Literacy.

"Fortunately, literacy, though it consumes its own oral antecedents and, unless it is carefully monitored, even destroys their memory, is also infinitely adaptable. It can restore theri memory, too."

Then we move to a brief historiography of our understanding of orality. Of particular interest, the fact that our literate, then chirogrpahic culture, was strangely, wilfully blind to the nature of orality. As if in disentangling the two modes of thought the original had to be not only rejected, but denied.

The one destroys the other. We can't watch our minds as they transform as they are too bound up in the transformation to keep a sober record of it. It is like a man leaping over a crevasse, if he wishes to make the leap he must not look down or think or pause.

"The fact that oral peoples commonly and in all likelihood universally consider words to have magical potency is clearly tied in, at least unconsciously, with their sense of the word as a necessarily spoken, sounded, and hence power-driven. Deeply typographical folk forget to think of words as primarily oral, as events, and hence as necessarily powered: for them, words tend rather to be assimilated to things, 'out there' on a flat surface. Such 'things' are not so readily associated with magic, for they are not action, but are in a radical sense, dead, though subject to dynamic resurrection."

Then in the modern age, the 'rediscovery' of orality and the various pioneering studies showing that what we are looking at ("looking at" is a very post-literate metaphor) is not just a retarded version of literacy but an entirely different arrangement of thought.

Then a  breakdown of some qualities of the oral state of mind with an interesting look at the wide variety of ways that spoken words are not written words, how the library of an oral world is made up of patterns, rhythms and formulae, endlessly re-performed and continually exchanged

Speech as an event and an interaction rather than as a thing.

Here's Ongs list of opposing values and states between Orality and Literacy:

1. Additive rather than subordinative.
2. Aggrigative rather than analytic.
3. Redundant or 'copious'.
4. Conservative or traditionalist.
5. Close to the human lifeworld.
6. Agonistically toned. "By keeping knowledge embedded in the human lifeworld, orality situattes knowledge within a context of struggle."
7. Empathic and participatory rather than objectively toned. "For an oral culture learning or knowing means achieving close empathic communal identification with the known, 'getting on with it'.
8. Homeostatic. "That is to say, oral societies live very much in a present which keeps itslef in equilibrium or homeostasis by sloughing off memories which no longer have present relevance."
9. Situational rather than abstract.

"But even with a listener to stimulate and ground your thought, the bits and pieces of your thought cannot be preserved in jotted notes. How could you ever call back to mind what you had so laboriously worked out? The only answer is: Think memorable thoughts."

Then the development of alphabets, symbols and grapholects

The book then moves to looking specifically at the dynamics of print rather than just writing without print. All the artefacts and modes of thought and arrangement that print makes possible (almost no indexes before print)

"Here even visual retrieval functions orally. Ionnes Ravisius Textors' Specimen epithetorum alphabetises 'Apollo' before all other entries under 'A' becasue Textor considers it fitting that in a work concerned with poetry, the God of poetry should get top billing. Clearly even in a printed alphabetical index, visual retrieval was given low priority. The personalised, oral world could still overrule processing words as things."

(See this is interesting becasue its a nice factoid but its also like the kind of thing that Scrap or I would do just for the fun of it. We literally invented a new letter and put it in the index of FotVH, a playful re-creation of the warm, personalised oral world view?)

This is a section and a group of ideas of particular interest to RPG players and especially the Douchebag Hipster Division of the OSR with our obsessive interest in and pursuit of high chirographic art, that is: layout and information design. The specific and careful arrangement of hyper-dense chirographic artefacts on a page in subtle and innovative ways combined with an equal obsession if inter-refferability in the manner of a a dictionary or educational book.

But the thing we are producing with this tool is a deeply oral performance. Everything is spoke and acted out. I wonder deeply what Walter J. Ong would make of a D&D session, one of the strangest symbiosies between the oral and chirographic arts ever produced.

D&D in regards to this system is an utterly bizarre synergy between a hypertextual, hyper chirographic culture, impossible without writing and without print, but more than that, obsessed with lists, tables and specific and highly dense kinds of informational layout. Also  based around a kind of cultic re-creation of the classic "epic" style of story-telling, the kind arranged most conveniently for the human memory, stories with powerful heroic element, "heavy" characters, travels through unusual geographies, unique animals, monsters, characters and remarkable objects. The kind of story created (in part) because its the easiest way for the human mind to encode information in a non-literate society (the adventure is the library of the epos).

The D&D session as the epic taken "inside out" in some way, the same elements being used yet in an entirely different way, generative instead of preservative.


Then we have a section about the development of story shape and plot and the shift to certain forms of plot and action that can really only exist with writing, and really only with print.

Then finally a chapter largely to do with the interactions of the study of Orality and Literary Criticism, which was invented by the devil so I'm going to ignore it.


one thing that came to me reading this is that a lot of the things that nerds are into use elements of oral culture in a new way, a strange affection since nerds are in some ways the most 'mechanised' 'technologised' and alienated people in a culture and yet they/we carry this instinctive interest in (parts) of the culture of orality.

Could it be that the growth of 'the genres', specifically Pulp, Superheroes, Fantasy Fiction in its post-Tolkien form, the Sci-Fi epic, and D&D, are re-discoveries or re-applied uses to a part of human culture that no longer has to carry the heavy weight of preservation?

A plot of land, once used to farm a subsistence living, now no longer needed, laid un-used for a while, now re-created as a garden. Similar techniques used but now for pleasure and expression rather than survival?

The re-colonisation of the oral mindset by an alienated chirographic culture?
Posted by pjamesstuart at 11:26