A review of Broodmother Skyfortress by Jeff Rients 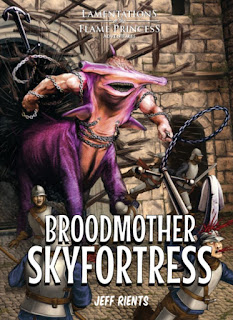 The action of the adventure only takes up the first two thirds of the book and I will deal with that first.

This is a specifically campaign-bollocking adventure (you will need to have a campaign going first and are given some pretty good advice on incorporating it).

There are bad giants in the sky, you have to fight them.

The Giants are highly personalised wrecking balls, difficult for even a competent high level party to reliably take out, even in the ideal circumstances. So they require situational, environmental solutions. Since this is all meant to happen to an on going campaign we can assume that this is a happy holiday for a mid to high level party back to the old days when they had to work out how to trick a Goblin into falling into its own hole.

The Giants are obviously dangerous but most parties will probably have the stank kicked out of them at least once in the initial encounter before they learn that they are meant to act like rats in the house. Beyond that point its a question of hide, sneak, flee, explore until you can trick the baddies into falling in their own stank hole or into killing each other. Or you wake up the conan demigod that kills everyone.

There are only two bad, or lukewarm things I have to say about it and both of them are down to personal aesthetic.

One, I didn't really like that they were Elephant-Sharks

(I think we can call this the Patrick Corollary or the Awesome Corollary.

"The more likely a nerd is to say something is "awesome", and the more intensely they are likely to say it (we might call this the exclamation supplement to the awesome corollary) the more likely Patrick is so grasp the bridge of his nose and go 'hhhnn'.)

The fact that they are elephant sharks is by no means central to the adventure (I think Zak turned them into Scorpion Men in his thing) they could be anything, and we are given a bunch of ways to re-skin them.

But the fact that's what they are is a primary element of selling the thing, one is literally bursting out of the front page and it makes quite a vibrant, colourful and joyful example, so if you are not into the elephant-shark thing then even though you can still use it easily enough you are going to have less fun reading it, which makes you less likely to use it.

Two, I'm a pretentious quasi-literary, actual-verified-hipster (have been in Vice -or at last on their website) deep-time, dungeons-need-an-aesthetic guy rather than the gleeful pop culture omnishambles kind of guy/girl Jeff advises you to be, so while there were parts of this I really liked, as a whole, it is a bit tangential to my preferred aesthetic.

The art, layout, design and the synergy between all of these is really good.

The info layout is as good as you are going to get with an A5 format. I couldn't find any unnecessary page-flips. Everything is in the more modern large-font Lamentations style rather than the primal super-dense Vornheim or the more medium R&PL. Its also in some kind of Ariel (I think) which makes it look super-clear and definitely-not-gothic, which matches both the tone and the intended authorial voice.

The borders have this 'kirby krackle' effect which sweeps around the corners and highlights the art very well, its also aesthetically perfect for the tone of the piece. In the back third where we get to lots of Jeffs game advice articles, the bordering changes in style, this means you can easily tell the two sections of the book apart from looking at the spine, which is handy and a nice touch.

Ian does an almost impossibly solid job on the art considering the wide variety of aesthetics that have to be incorporated, he has to link the LotFP actual-Europe setting to the Jeffs dayglo-Kirby world and make them feel like a whole thing.

He also just has to draw a LOT of stuff and does it all really well. Ranging from the different kinds of potential shark giants to the objects in the dungeon to the scenes from the module that sweep across the bottom third of some of the spreads in pretty good facsimiles of kirby energy to the colour splash pages to the seemingly endless authorial inserts (more on this later), the art never feels like it is out of control or out of place. Its expressive of the imagined larger LotFP world, of the world of the Skyfortress adventure specifically and of Jeffs chosen mode of address.

These are exactly as good as you would expect from Jez. The front and endpapers have the maps on for convenience. Each map has the page number for each of its elements and each map has the encounter chart for that area *on the map*.

The larger map has what I think are painted(?) clouds and the building map successfully unifies two interlocking levels in one image without obscuring either. Maximum points for both beauty and utility.

The synergy of all these elements and the knitting together of them into a single aesthetic whole is worth remarking on. It's literally snap (Jeffs Gygaxian & Marvelesque tone), Crackle (the Kirby borders and thrillin' heroism) and pop (the direct incorporation of the pop-cultural elements in both content and narrative voice and the vibrant splash pages).

This is a 'greatest hits' of Jeffs Blog, which also manages to be a pretty good expression of his ludic heart.

- Motivations: The correct motivation for someone who wants to play D&D but then won't go into the dungeon for 'character reasons' is a slap in their stupid face, but if you don't want t do that, here you are.

- Carousing: the table that launched 1000 other tables.

Jeffs 20 questions - Has been & remains a really interesting way of looking at an imaginary world. From the play 'up'. This is really what should have been in the 5e DMG, along with Zaks 'you wake up in a dungeon and when you get out the world is decided by the backgrounds of the characters you made and the things you interacted with' thing rather than 5es "first, choose your gods" version where at the end you jam your players in it. "Ludogenesis" - creation from play rather than creation-then-play

- How to Awesome-Up your players.

- Wessex Grimores - the grimores are really good & would be a fine addition to any game, even a very culturally different one could have them turning up occasionally  - the euro-specific heresies would just be strange fragments of esoteric alien knowledge

(I don't relay understand the spell selections, they seem thematically disconnected from the idea of each book and from each other but perhaps they have a ludologic of which I am unaware.)

All of this is about what is *in* the book not what the book *is*. What it is is really interesting, its kind of the closest we have got to an OSR DMG.

There's a few interesting things about it. One of the most interesting is the presence of the author in the text.

Up until now most creators in my particular range of the OSR have been silent prophets, who give you tools and problems but speak very little to you, not necessarily even friends but possible antagonists. They/we tell you the basic minimum you need to play but at no point tells you the attitude you should have playing or what kind of culture you are joining. From what is explicitly said you may as well not be joining any culture at all, you may be entirely on your own in this.


That's basically me describing a dungeon to you. Or Zak maybe.

The other voice could be called Americaian-mercantilist, but that's a bit harsh, maybe "Yankee Shriner" is a more pleasant way of putting it.

This voice is a little like Stan Lee for Marvel or Gygax for D&D. The friendly paterfamilias, the creative market trader. Genial, chummy, simultaneously all-knowing and deeply experienced, generally dismissive of intellectualisation and quite definitely inducting you into a club.

(Americans just really, really really like being in clubs and things. I think De Torqueville even mentioned it. You guys never just want to play, you want the badge as well.)

In this Jeff basically creates himself as a kind of OSR Gygax. He is directly and deeply present in the text at almost every level. The man himself is imaged multiple times:

(I think we should all take a moment to respect the number of times Jeff was willing to write "I want you to draw me as a heroic ......." with an admirable lack of the shame or cringing self-awareness more common to lesser men.)

His voice to the reader is literally his *voice*, his paragraphs get little speech-bubble borders around them. He gives you his fucking email in the intro. His explanations are him there pictured on the page, explaining things. This continues into the text even when he is not imaged and even when his 'jeff is talking' voice segues seamlessly into the 'dungeon description' voice. It binds and ties the whole together, like the Force from Star Wars, as Jeff would probably point out at this point in a paragraph.

So this is a fundamental shift and a really different thing.

The "Jeffs Greatest Hits" section might be old hat to most of us but they are a pretty good precis of a lot of ideas and processes fundamental to OSR play, wandering monsters, you-should-be-exploring, have henchmen, carouse. To someone unfamiliar with the OSR this tells them an awful lot of what they need to know, or a least a version of it, which is as close as you are going to get to a formal into in an anarchist community.

It feels like it could really work. It's a strange combination of things, an adventure you use only once you already have a campaign. A bunch of advice and tools on how to run and think about that campaign at the back, after the adventure, and a tone and authorial voice which is prefect for introducing people to a new idea.

Before when you recommended Finches Primer to people asking what you were on about you can now extend that conversation to "and also buy Broodmother Skyfortress if you can afford it."