The alternate version of me from a parallel world seems to have got interested in sculpture and war games. I got this bunch of images and commentary from an email address that uses the & instead of the @ sign, that usually means its from him. 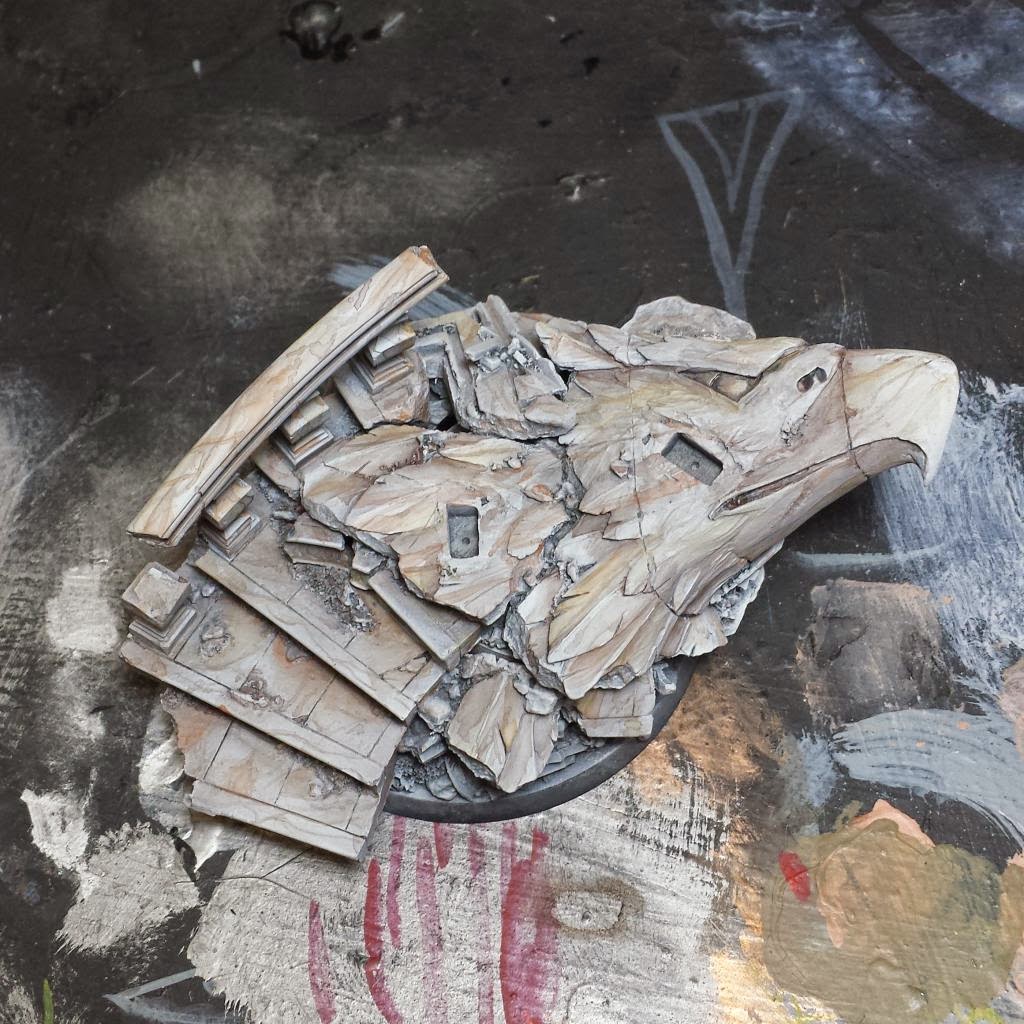 Frater Domus posted this on www.bolterandchainsword .com
This chunk of Roman masonry, only recently rediscovered during building work in the Vatican Cellars, dates back to the rule of Augustus. The stairs have sockets for what historians estimate to have been a several-tonne statue of bronze. The statue would have occupied a commanding position in the capital. It has never been located and no recorded references to it have been found. Speculation on the 'Eagles Foot Statue' is rife, but it seems more likely that this is a historical mystery that will never be solved. 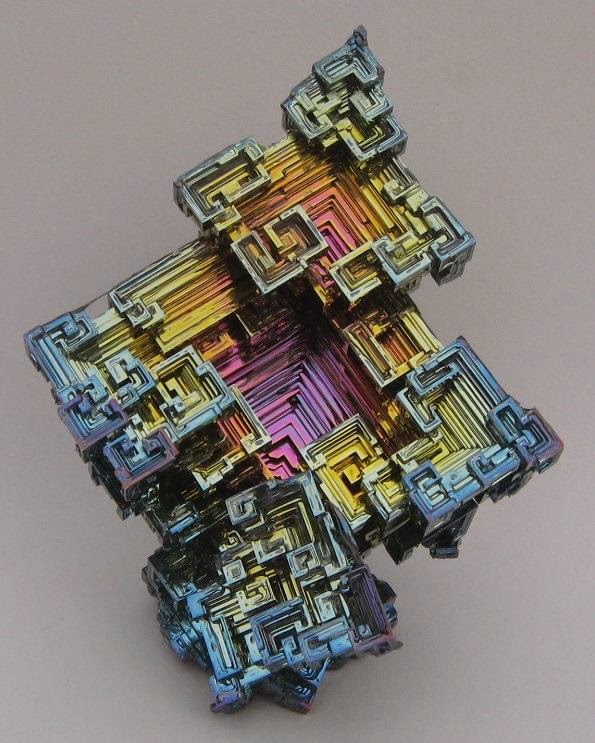 A freestanding bismuth crystal from GeologyPage
Dimensional Gate for the 10mm game 'Echoes of Fire'. Echoes of Fire features the apocalyptic earths of five separate dimensions fighting both each other and the current earth culture to claim our unspoilt version of the earth as a new home. The dimensional gates play a pivotal part in the fluid activation section of the game.

This one has received a near award-winning paint job from 'Lupin'. 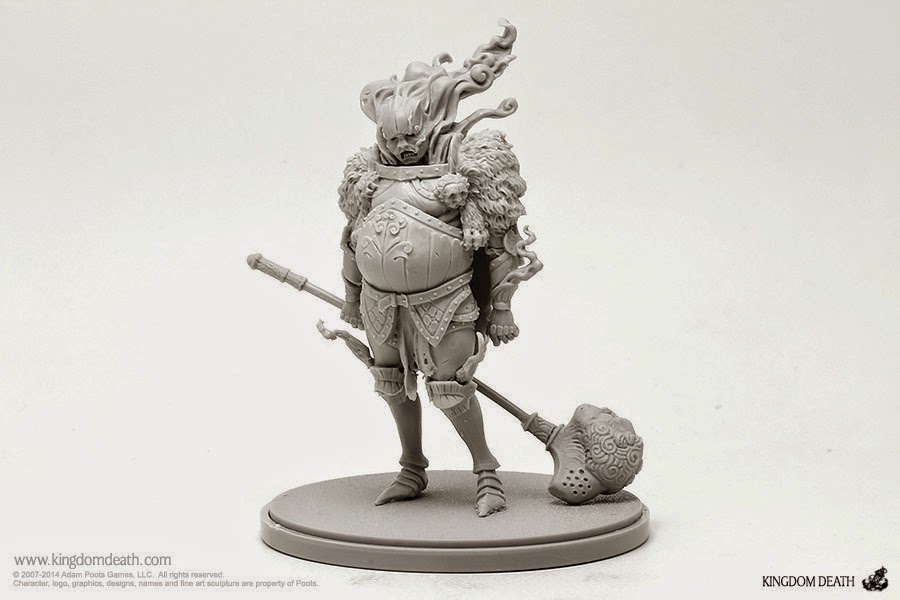 Kazmir Durecht's famous Sculpture 'Saint Djangos Passion' famously destroyed the career of this master of the Northern Renaissance when it was unveiled before the Pope. Durecht never worked again and is said to have ended his life as a pirate on the Yugoslavian coast. 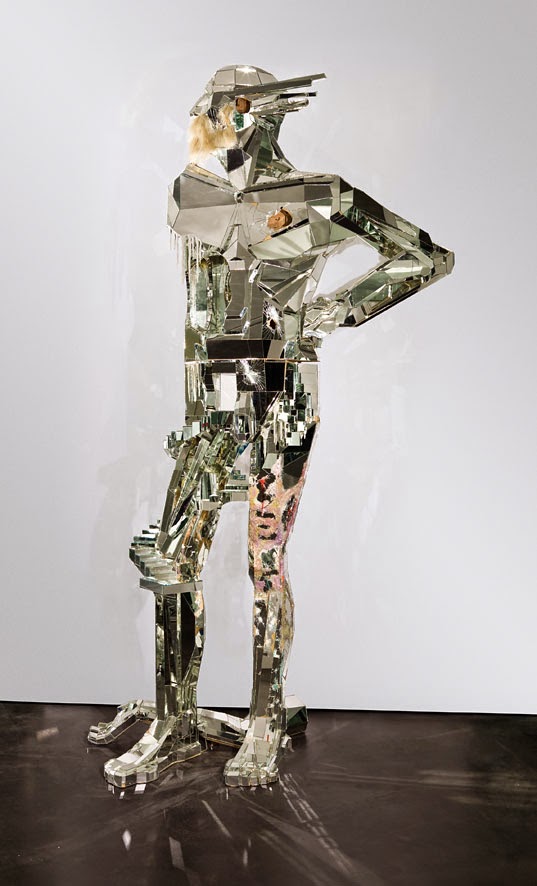 A giant by David Altmejd
28mm Krystallmann from 'War For Artcurus'. The wargame based on the visionary science fiction novel/mystical parable, has never been more popular. The Krystalmann player has limited forces and can only respond when the main player acts, but has almost infinite abilities to morph and transform the board and can confound and disrupt the active player with a variety of highly original mechanics. 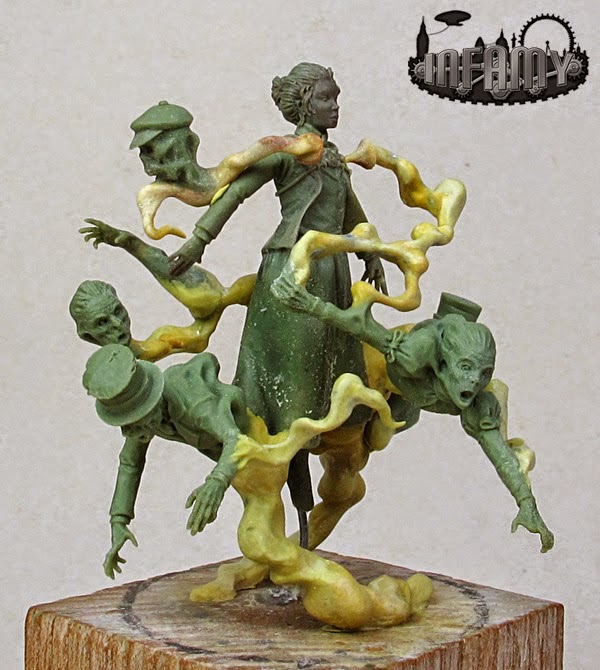 Test Sculpt by Infamy Miniatures
A little-known example of the St Petersburg Realist School. All of the artists involved were utterly suppressed as the Bolsheviks tightened their control in the early years of the 20th century. Despite the name 'Realists' and their leader Fydor Kosmocot's famous defence of realism, all of their sculptures seem to have been direct representations of supernatural phenomena.

Academics are still torn over analysis of this school and discussion of it can provoke heated arguments even today. 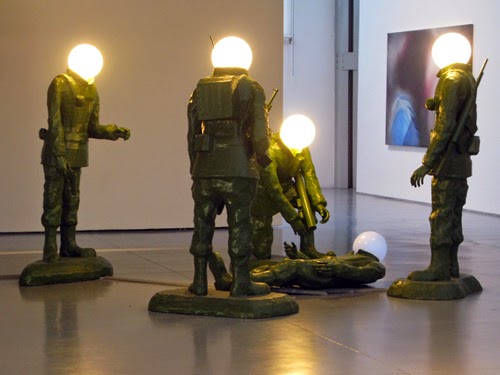 By Arnaldo Pomodoro, not sure what its called
28mm GlobeSoldier diorama by Markus Jobt. The GlobeSoldiers are a key element in the German game 'Shadow-Disrupt' in which innovative mechanics mean that your pieces eliminate the fog of war in a literal sense. Only one player has solid sculpts for their forces, (which come with batteries for their implanted LEDs) the enemy side figures are mixtures of two dimensional forms and lattices of gauze and wire that cast specific shadows. The 'Light' player wins when they disrupt all shadows but this German game is notoriously hard to beat, it has a small but ferocious following. 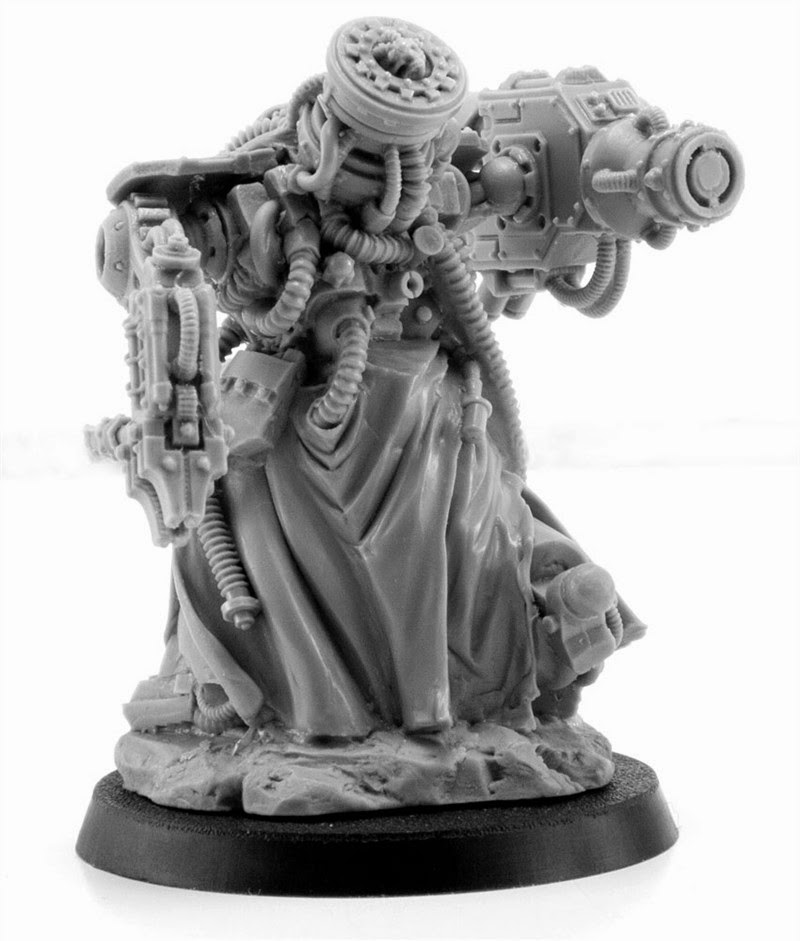 Mechanicum Myrmidon - Forge  World
Garoslav Gasparzkis 'Machine No5'. Overcome with a love of both futurism and fascism Gasparzkis famously travelled to Berlin in the late 30's to entreat Hitler to allow him to become the Fuhrers personal sculptor, claiming that only he could fully encapsulate the great mans 'will to exceed'. It is probably lucky for Gasparzkis that Hitler refused to see him. Gasparzkis had Romany ancestry and his situation might well have been untenable. As it was he died a recluse in his Rhode Island studio in 2001. Since his death his work has undergone something of a popular Renaissance. 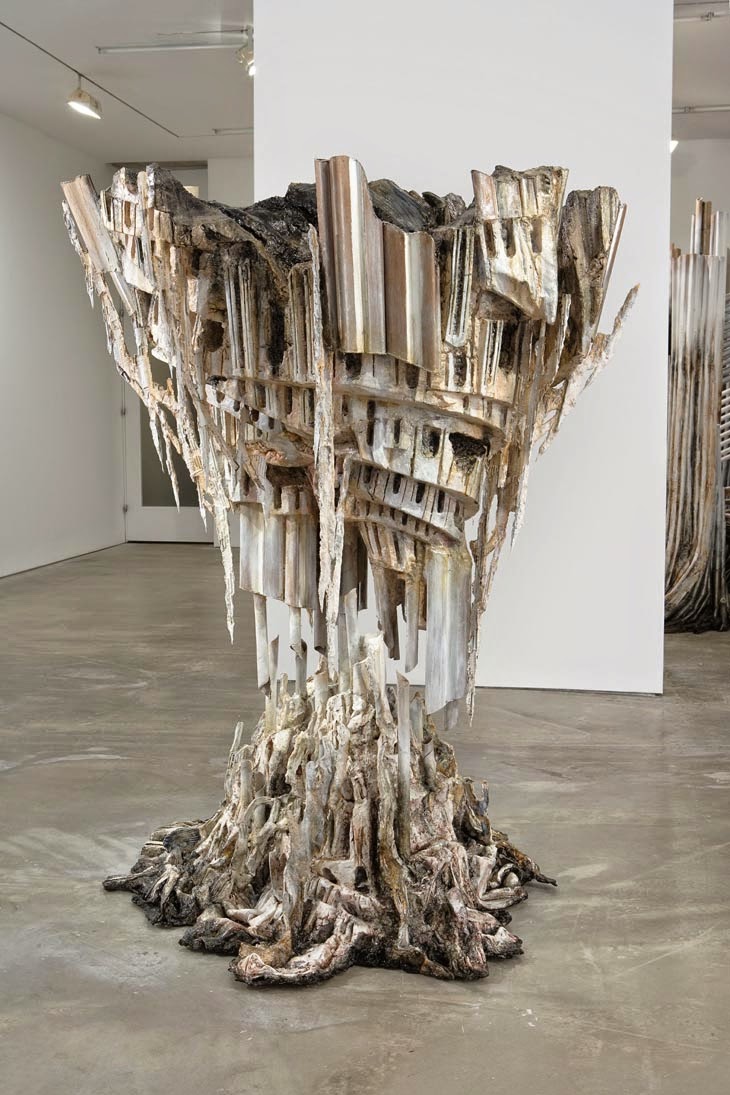 By Diana Al-Hadid, not sure of the name
This 'Elven Distripolis' diorama was only seen briefly during Games Day 2006. It posits an Elven city poised somehow above itself. Fans complained as its mixture of science-fiction and fantasy elements was utterly unlike the mainstream warhammer universe and they could not locate it in the official timeline. The Diorama was removed from view and its existence has been denied by Games Workshop ever since, though it does have a kind of Samidzat being in rumours and recreations from fans who claim to have seen it. Conspiracy Theories suggest it was created as part of a possible 'alternate universe' for the game that never came to light. 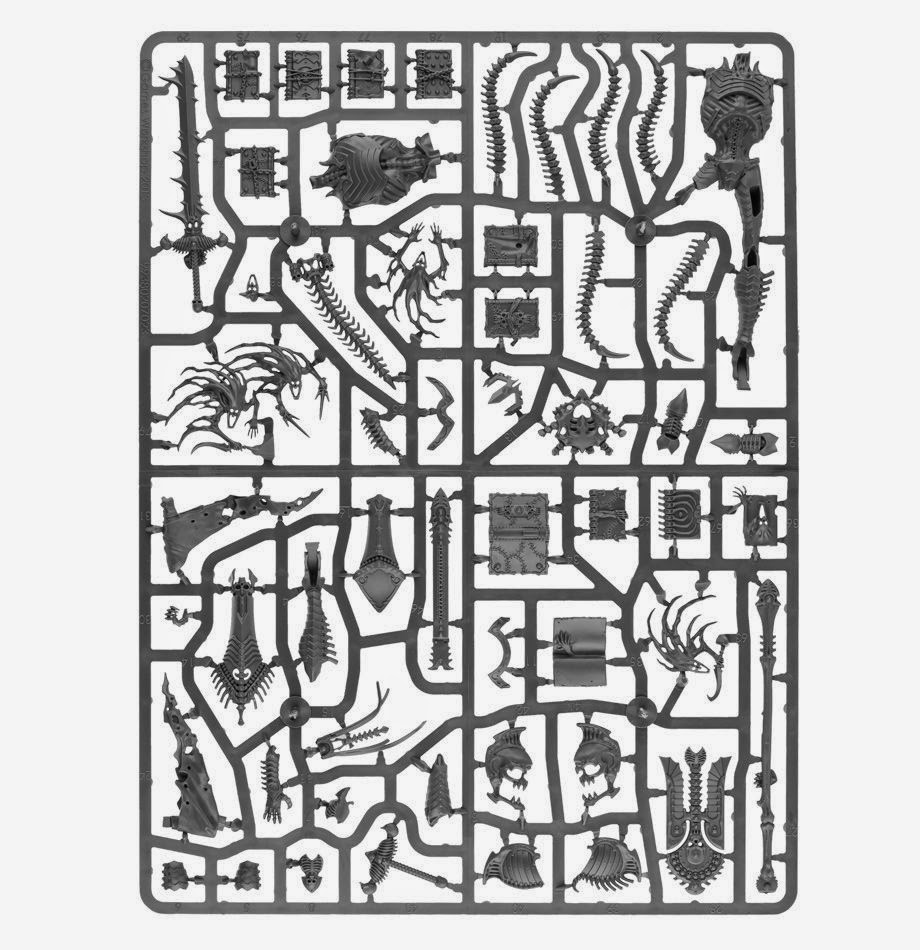 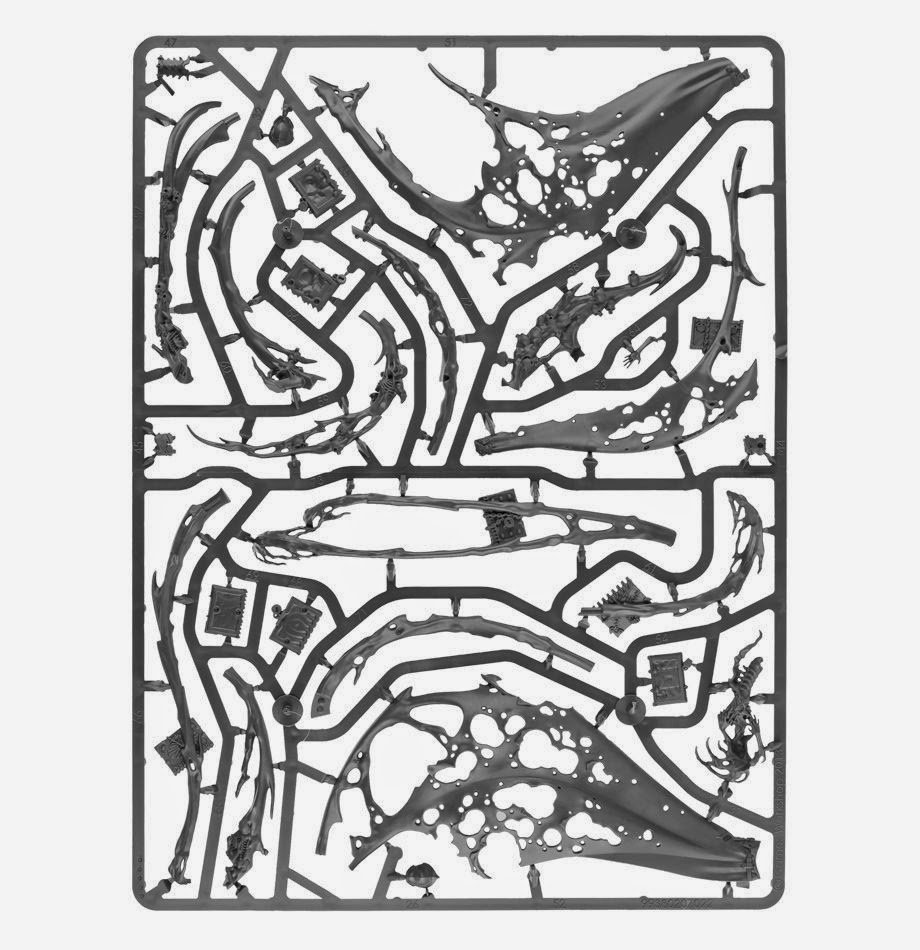 Nagash Sprue by Games Workshop
'Fragments Of A King' by Oscar Schott. The German sculptor famously caused a minor riot in Paris in 1915 when he delivered his promised monumental sculpture, not as a human whole but broken into pieces and carefully arranged across two gigantic racks of steel. 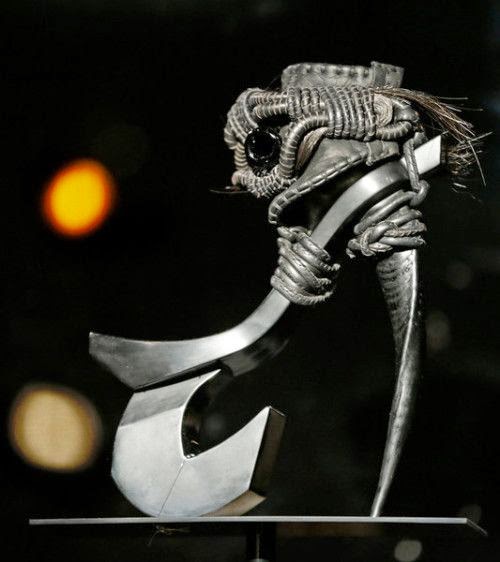 Masaya Kushino’s “Storm Horse”
'Hrud Attack Cruiser'  by Faustina Blythe. Blythe left Games Workshop under a cloud after working there for less than a year and has since become an accountant. She is not available for comment. 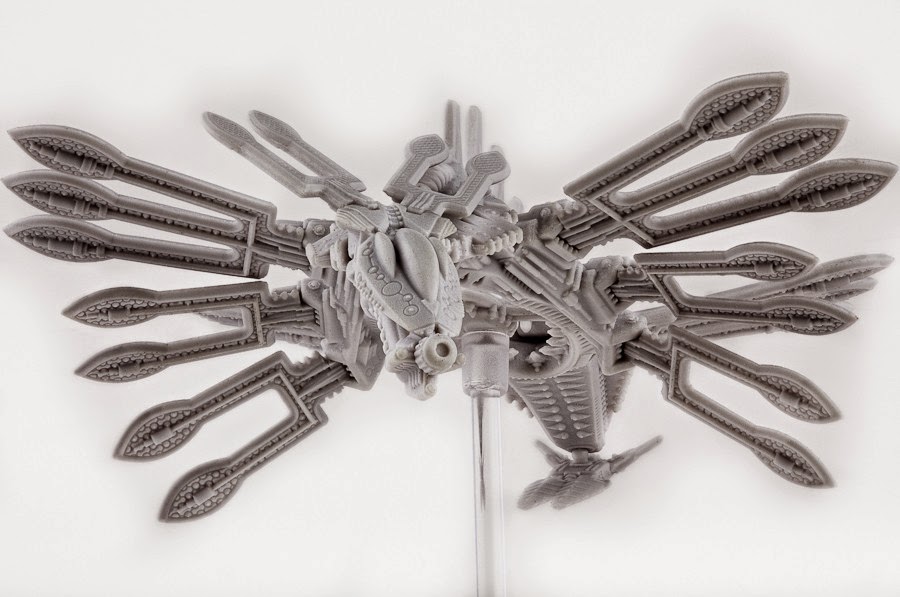 Shaltari Firedrake - Hawk Wargames
'Terminal Angel' by Patricia Kirby. Kirby was a low level physicist at Los Alamos, after the end of the war she dropped out of the world of Science and disappeared. After her death, her numerous sculptures were discovered in a series of rented garages around Los Angeles, she had never attempted to sell one, or even informed anyone that she was making them. 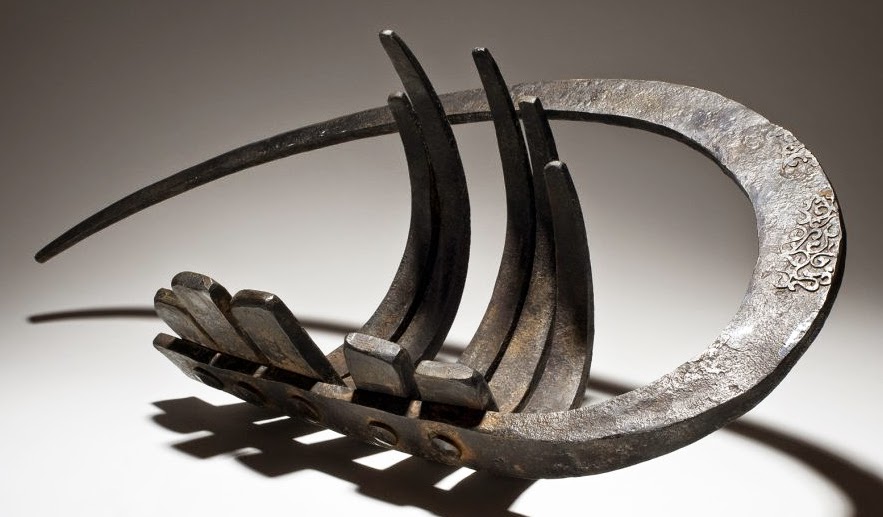 Cosplay object for the Villain character 'Ten Shadows' from the popular Anime 'Apocalypse Horizon', this is clearly from season seven, after Ten Shadows builds new armour following their defeat in the Ash Wars. The original design was by Mitshishi Sato. 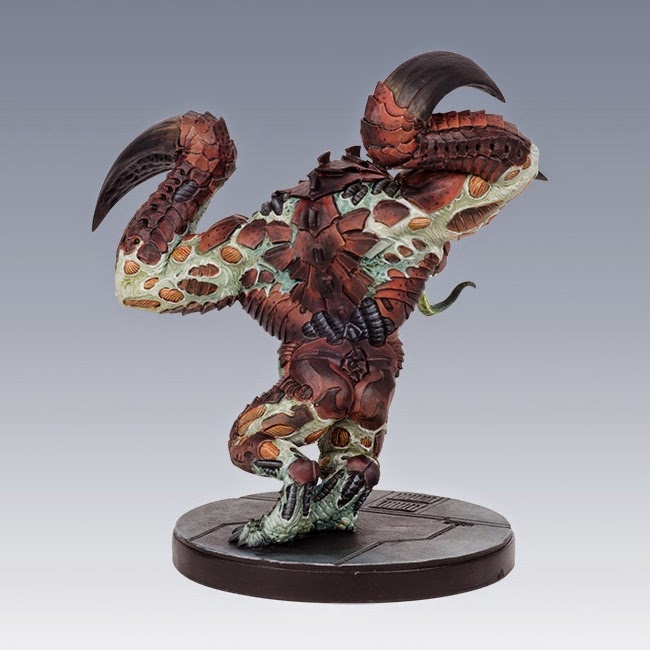 Thraex - studio McVey
'Master Hunt' by Lucious Puccoon. Puccoon became popular as a corporate artist after befriending California Governor Arnold Schwarzenegger. Though looked down on by almost the entire critical community there are few major corporations what do not have a Puccoon stashed away somewhere. He is rumoured to be the richest artist in North America 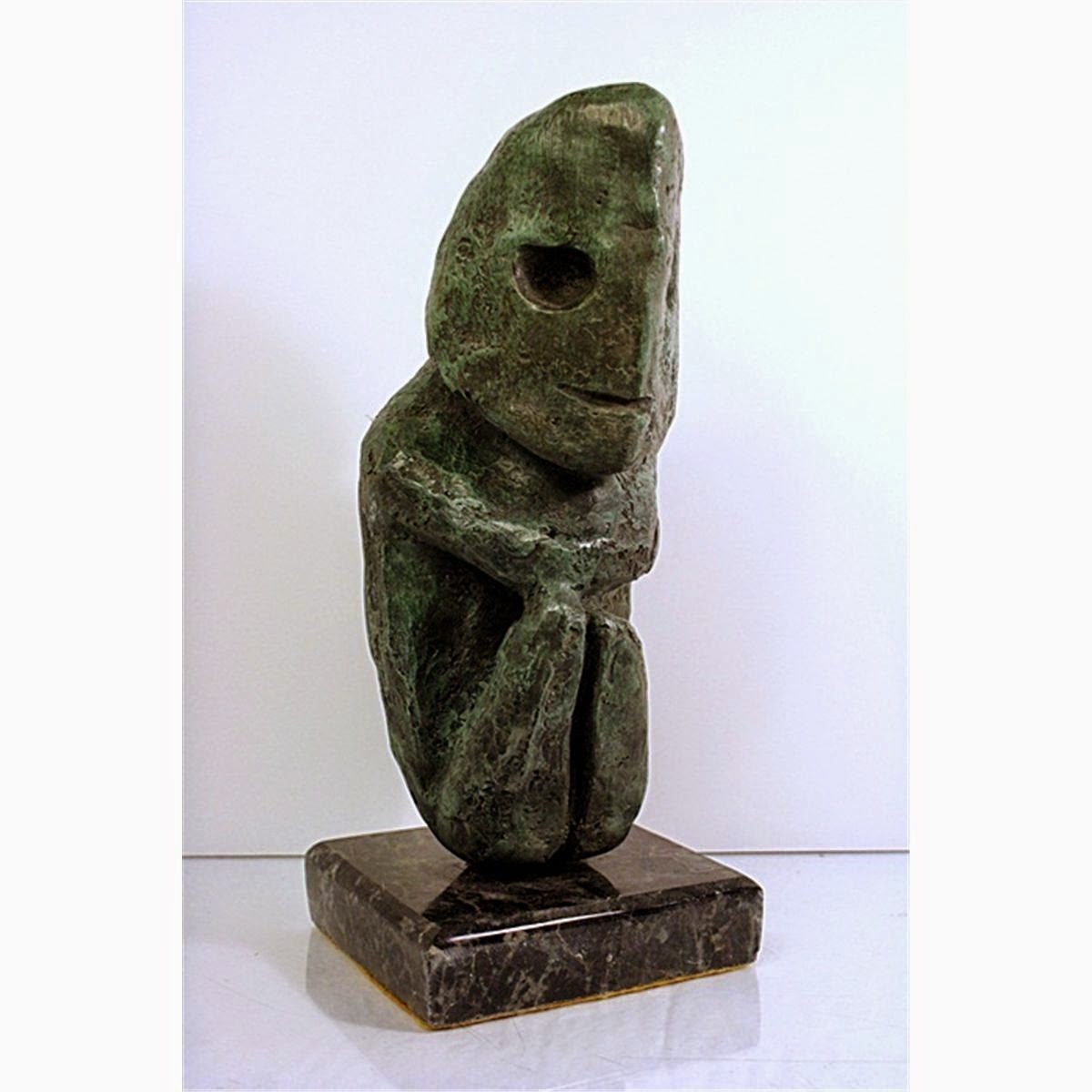 Max Ernst Crouching Figure
An older game piece here. This was recovered from the ice beneath a former Russian gulag during the brief thaw (both political and literal) in the early 90's, along with several other pieces and the rules for 'Gulag Chess' carved into a strip of bark. This highly modified version of chess starts with one player massively outnumbered in the centre of the board and challenges them to escape.

Just to be clear, this is all a fantasy. If you want to see what these things really are and who really made them then there is white text just below each one. Highlight it like the white text here: IT'S A TRAP YOUR SOUL IS MINE NOW.

Email ThisBlogThis!Share to TwitterShare to FacebookShare to Pinterest
Labels: Cryptoculture, Form, Sculpture, seem to have gone on a tangent again