This is a review of Paolo Grecos Cthonic Codex part one, Cryptic Creatures.

The cover is by Clair Maclean. It looks like this: 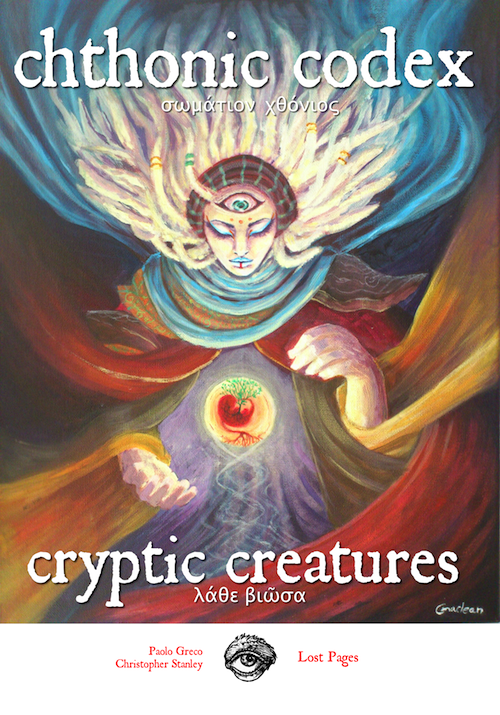 Ok lets do the basics first.

There's monsters, about 30 I think.

Nevertheless, paper stock is good, looks like it would hold up ok round the table. Someone (Paolo) took their time putting it together so you could bash it about and it would probably survive.

This version came in an attractive and sturdy box.

The layout is one image of the monster and a description on the opposite page along with mechanics. Mechanics come in standard OSR stat block and another for Paolos AFG system. Many monsters have random tables and special rules. Nothing that anyone rading this would have any trouble using.

Paolo fell in love with the fonts making this I think but has managed to avoid any of the stupid stuff design people end up doing when they start thinking fonts are important.

The two urges in RPG design are, on one side, the Raggi-Esque old-school clear-out-the-shit nothing-but-vital-info and on the other, the deep desire to have magic glyphs and have the runes in the spell book look like real runes and have the doomed world transmission *look like its on a real view screen*. These are both noble intuitions and the war between them will never be done.

The fonts and arrangements are a neat synthesis of these two very different impulses. They are 'ancient-world' enough to look like they are from an ancient world but also you can fucking read them.

Layout in general is good, clear. One could perhaps argue that some of the tables are a bit fernickety.

Paolo has decided to use a whole bunch of methods to squeeze a bunch more information out a a dice roll I see. So far so OSR, a country fair staffed only by tinkers who built their own goods, in which 90% of the market is also tinkers and occasionally some normal people kind of fall in by mistake.

Interior art is by Christopher Stanley. It ranges from ok, to good to very lovely. There is a thing with dots he does where the lines dont quite meet up and very generally, the pictures with more dots are better than the ones with less dots. He seems to be an artist where, if you give him more to do, he gets better, which is a generally good sign.

Honestly if you want someone to say something intelligent about art then you can send it to Jason Dozens, Playing Z&Z with Zornstars or Scrap Princess. You know its me so you get a paragraph on art and a page on writing.

But what kind of monsters are there and what world to they infer?

There are things made by Wizards, which is ok in this case as the envirnment described is round a kind of magical university.

Threre are one or two that could easily be things invented by Gary back in the day, or be from legends that you've read but can't quite remember. the Horned Kateract is like this, they all have veils over their eyes, can percieve everything around them and cause effects depending on which eye they unveil each turn, but its never both at once.

There are a bunch of things shat out by raw magic, some strange cave life, and some more general monsters.

If I had one complaint its that it doesn't feel 'cavey' or undergroundy enough to me. Probably you know my prejudices in this area, if everything isnt blind, drained of colour, insane and used to waiting twenty years for a meal I am not satisfied. But 'Karstic Complex' can mean many things, it can mean caves, but also limetone labyrinths, broken ground and desolate dry moors and this does feel like that. Caves, deep valleys, gorges and crags.

It's sunny for a cave and that probably becasue Paolo is kind of sunny.

Its almost a social monster manual as almost everything you meet is going to involve you with either things made by other wizards or creatures generated by magic. There are a one or two possible Alpha-Monsters-That-Also-Have plans and only one organised enemy race, the Cephalapods. They are more schemers than thugs. I can't imagine them skullfucking you, they look kind of worried in the pictures. Probably they are worried about the wizards.

There are rules for the omens gathered by watching birds, depending on what they do. Which I like

The monsters have descriptions from in-world perspectives, a sliver of history each, and then simple direct rules.

Its clearly the voice of a very enthusiastic person speaking an a second language
not badly written, but with words and timing arranged in a way that puts it a bit outside what I imagine feels normal for most english speakers.

Which is good really as it fits in well with the foreigness and strangeness. I kind of imagine a tour guide in their mid 20's guiding you round the Hypogea, gesturing at things, maybe waving their arms.

"As they become older and wiser, more and more bent and withered, even more haughty and crotchety, often they die. And while sometimes it's not noticable, some other times it is, and it's ok. So when they do go properly dead and motionless, we usually bury them in the catcombs, so that we can protect them."

The prose virtually has an italian accent.

"So no, we don't simply bring a few different skeletons stapled together back to a life."

One thing I keep thinking of while reading this, for some reason, is 'The Courtier' by Castigleione. This is a rennaicence book where a bunch of very mannered, sympathetic and human people hang out in a castle and discuss all manner of things in a highly civilised style.

It feels like that. Its has a very warm tone of voice. Personally when I'm writing I tend to go for pounding pseudo-miltonic wierdness that goes after your spine and doesn't hang around to hear what you think about it, but this book isn't like that, if it had a face it would be smiling, and listening really. Happy to be speaking to you. "Oh did you see the Silver Swans flying towards the sun? bad omen for travellers I'm afraid. You should stay the night. Sit down and have some wine."

More than anything its a book of monsters that brings to mind the people who tell you about the monsters. many are useless without a personality to link them too, several of the rest will probably want to talk to you, several will steal or alter your magic if you have any.

If you want to meet those people you can just go through the monster descriptions and find the first story fragment with a name and bit of history. If you like, that could be the person speaking, maybe its happeneing now. If you just take the past tense out of the story fragments then its a plot generator instead.

"Grand Sorceress of the Valley of Fire Edonoplechtus III ha(s) a penchant for silent guardians ... she (has) realised that the lovechild of a male barn owl and a female 20-foot long python (is) the perfect predator for an environment consisting mostly of underground caverns (but they have escaped and she wants them back, and her name kept out of it.)."

Email ThisBlogThis!Share to TwitterShare to FacebookShare to Pinterest
Labels: Reviews