Thoughts on the Sabha Parva

Its book two! The Book of the Assembly Hall. And it has the best quality of any book - that it is short. 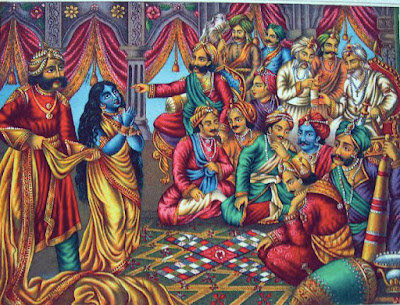 I'm pretty sure a guy gets cut in half in this, maybe two guys?

There's some dude who was born in two halfs which were then sealed together by a demon chick - well Bhima rips that guy like open a phone book.

Then there's a ceremony or something. An underachieving relative gets honoured and some irritant starts giving everyone shit

There's a self-fulfilling prophecy (there always is).

Anyway, thus guy tells the irritant "I'm gonna let you insult me exactly one-hundred times. Because of that dumb prophecy. But that one-hundred and first time.. mate don't fucking do it...."

But the guy is a tool and does it one more time and gets bisected by a high-speed chackram.


The main thing that sticks in my head about this is the horror of severe Gambling addiction.

The Pandavas main guy, Yudhishritha  is the son of a God, and meant to be incredibly wise. (Though *not* his monthers first son, that child was raised by a charioteer so even though he's super-amazing he can never be important ever).

The Pandevas build a big wonderful palace in the kingdom they made from that forest they torched.

There is an official ceremony where you basically Brexit yourself, or sign your own constitution and get your own flag and now you are a proper kingdom.

The Pandavas want a bunch of kings to come to this thing to validate it, so the go and beat up a bunch of local neighbouring kingdoms who were "bad" (one, the demon-sewn half-n-half guy, was apparently "about to" do a human sacrifice, which sounds like a 'they have weapons of mass destruction' situation. The Pandavas deal with this guy the same way they deal with a lot of things, like Old School D&D PCs - sneak in dressed as Priests then have Bhima tear the guy in half).

So the Pandevas do some local regime changing and invite everyone to their big ceremony.

Duryodhana of the Karuvas, their main rival, arrives. His low self-esteem is about to get everyone in trouble.

He's so amazed (and jealous) about this palace that, staring about at all the cool stuff they have, he falls over.

AND Draupadi, the wife of the Pandavas mocks him public ally.

AND she makes fun of his blind parents at the same time!

So this seems some very classic Mahabarata stuff - pride, shame, public shaming, the little impulsive worm desire to publicly dominate or degrade someone.


Duryodhana  goes home, and in his increasingly customary Dick Dastardly manner, comes up with a clever scheme - invite the Pandavas to a big gambling thing.

An interesting thing from the Doring Kindersly edition - apparently at the time, inviting a King to gamble or play games of chance was completely normal and, in fact, it would be weird for a King to *refuse* such an offer.

So turning down an opportunity to gamble is slightly sinful (wrong word) and questionable. Which is an interesting inversion from the West.


But the Kanavas have a gambling expert.

(This guy has his own backstory - a branch of the Pandavas family imprisoned his whole family and as they starved slowly to death in prison they gave all their food to him, the most intelligent of them all, hoping that he would survive and take revenge for them. Which he did and does.)

Its a really horrid scene, still effectual through a few millennia and multiple translations

Yudhishritha just keeps going back - the Karuvas gently chide and humiliate him if he tries to to leave, and the mania for gambing and the sunk cost situation make him go back and back and back, each time losing more and each time thinking he can win it all back.

There is a general atmosphere of increasing horror to this as everyone can feel it going deeply wrong but no-one has the will, strength or authority to stop it

Its not Duryodhana doing it *directly*, so he is disassociated. The king is blind and weak. The Pandavas all have to go with their older brother, because = Vedic India, but he is temporarily mad.

So he loses the money, the kingdom, the houses, his brothers one by one then himself, then his wife. The same wife who humiliated Duryodhana in the palace, and who he now systemically humiliates in front of everyone by dragging her in, stripping her naked (divine intervention stops this) and making it extremely clear that her husband gambled her away.

Then she flips out and says the next time she braids her hair it will be after she washes it in his blood.

You went too far dude. It's such an overwhelmingly bad idea to humiliate your enemies.


Then the Pandavas get banished to the Forest for so many years.

All of this fine-grained humiliation relies on people really wanting to hurt each other but staying juuuust within the rules, and sending the Pandavas off to the forest is using their sense of honour against them "hey you gave your word right? In public?"

They leave in this ritualistic way, each performing some action that symbolises how much shit they are going to cause in the future.

Its made pretty clear that this isn't just one persons failure. Its a systemic societal or general human crime. Everyone in the Assembly Hall had something to do with it, and everyone somehow contributed to it.

Duryodhana sets up the game but Shakuni the evil dice master does the dicing.

(But is he actually evil? He is taking revenge for his starved family and in some versions his cool dice are his dads fingerbones.)

Yudhishritha just keeps going back, the Kauruvas plan works waaaay better than they thought it would. Too well in fact.

None of the other brothers have the nerve to act in an un-Vedic way and to tell the older brother to knock it the fuck off.

Just a biiiig web of circumstance and different failings, with everyone trapped in it and contributing to it. Which I suspect is the point with the whole Dharma thing. You can win the big fight at the end but how do you get out of that web?

Email ThisBlogThis!Share to TwitterShare to FacebookShare to Pinterest
Labels: mahabharata