Thoughts on the Adi Parva

Just finished the Adi Parva - The 'Book of the Beginning', first part of the Mahabarata, this thing is so huge that I will have to review it piece by piece as I go along. 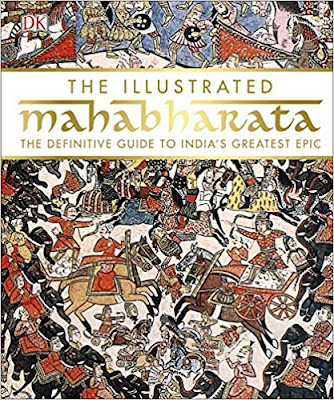 A friend recommended this to be as being 'like the Horus Heresy', which it isn't, yet. But it's getting there.

The bits that are extremely unlike the Heresy are that there are loads more women in it, a really surprising amount of gender-bending and trans representation. Its all about families (which is a bit heresy), but has multiple overlapping divine hierarchies. And instead of its moral axis being dark-good vs ultimate super-evil, its Dharma vs Vengeance/Justice, which is very different indeed.

The story doesn't really have a villain.

The ways in which its getting to be more like the Heresy is that it has a lot of very tough, ultramasculine and VERY FUCKING TOUCHY men, and a complex attitude to what might have been a little bit of a genocide, or at least a dab of ethnic cleansing, if the Nagas are indeed standing in for or representing an earlier forest-dwelling snake-worshipping people and if book is also about how Aryans burnt down the forests and dispossessed the Naga to build Civilisation, which was terrible, but necessary.

A few things made this a challenge (for me specifically) to wrap my head around.

It’s an epic based on descent so there are multiple family trees and a complex cast of characters, plus the specifics of how parentage work in the ancient Indian society are reeeallly important.

It's Doring Kindersy so everything is quite carefully laid out, with lots of reminders, but I would still have had a big, main family tree with portraits on a dominant page.

Non-anglo phonemes and unfamiliar cultural stuff make it more of a maze than it otherwise might be for my born-in-the-80's ass, but that’s the path of Dharma I guess.

The extreme intergenerational obedience between fathers and sons would be strange for me even in a historical European context.

The curses are fascinating, they are often more like challenges, or weirdly specific superpowers.

Long chains of circumstance which often begin with the mild or errant wish of some god, or the unwise (or too-quick) promise of some king. A god basically momentarily arranging furniture can really fuck up someone’s life, or fundamentally change its context.

In many cases the originating crack is a worm of superiority and contempt, a desire for social dominance.

So far I find myself probably more on Duryohanas side, even though he is "the baddy".

There are lots of things here that remind me of old dark-age Euro-stories being 'reinterpreted' by Christians so "actually" they were spiritual, and not just about men and death.

The thing with 100 sons, I couldn't help but imagine a historical king going "Well this Yogic magic has DEFINITELY WORKED and now I have 100 SONS and absolutely not just a chunk of abortive meat. Any FUCKING QUESTIONS ANYONE???"


WHAT IS THIS ABOUT REALLY?

We will see how this goes.

You can lose, but win spiritually. Or be in the right, but still fail.

You can win, but lose spiritually. Or be in the wrong, but learn and change, and hence attain Dharma or whatever.

This book is large so I read it on a pillow across my crossed legs and I feel extremely deep and philosophical doing so. I feel like I want a Prince to wander into the room with a complex query and I can be like "Ahhh, the answer is Dharma..."

Email ThisBlogThis!Share to TwitterShare to FacebookShare to Pinterest
Labels: I read a book, mahabharata