"The wilderness of Wirral,
few lived there
Who loved with a good heart
either God or man." 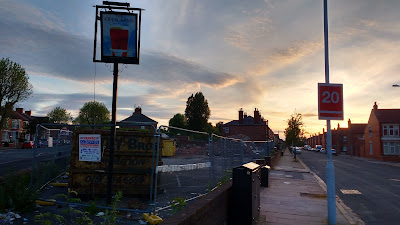 Even without its unearthly substrate of sleeping Titans, Wir-Heal would still be a strange eddy in the lands of the Wrecked Heptarchy. Named for the Wir by men of the North, the Myrtle, the Myrica gale that grows in the bogs and scents the air with sweet resin, Wir-Heal is made from swamp and hill with little in-between.

Rippling bogs and still meres wrap the land, the glasslike water broken only by the cry of birds. Tidal flats make up its margins, reaches of sand and reeds riddled with runnels and streams, invisible until you get close. Covered twice a day in the murmuring of surf. Its paths are pinned to the earth by bridges of mortared stone, crumbling concrete, pine planks, un-nailed adze-cut oak or the dessicated jaws of whales.

Walkers find faded images with disappearing glyphs, which seem to be maps. Greying fog-like letters and bare black signs, an argent arrow, pointing to a place. Men have gone mad studying these signs. Impossible to tell what comes from when in Wir-Heal, so twisted in time the place is. What’s unknown is best ignored.

Hidden in the wilderness like dim gems in a rusted crown, are small hamlets of low slumped stone painted white, piled in skeletons of black oak and topped with thatched roofs, surrounded by fields fenced with branching drystone walls. In the fields are wild woman and wild men who walk on all fours eating the grass, chewing on dandelions, vines and branches and leaves in their hair, green men, grotesqueries. The Woodwose.

Watching over them, farming them and eating them, are animals standing on hind legs wearing the masks of men. Sheep, pigs, bulls, boars, bears and wolves, hares, otters, cows and deer, all with voices and the minds of human beings.

Beyond is forest and the wrecks of time. Deciduous climax vegetation broken by rolling hills like whales shouldering waves, cut by red escarpments of sunset-red sand-stone that glows in summer light, crossed by ruins and the wrecks of rails and roads, riven remains of an imagined future. Thick with crumbling concrete pillars, rags of tattered plastic, shards of glass and shining half-rotted cans with undecipherable signs, chain-link fences rising from the undergrowth between brown walking-tracks of beaten earth that break into rivulets of indistinguishable trails. 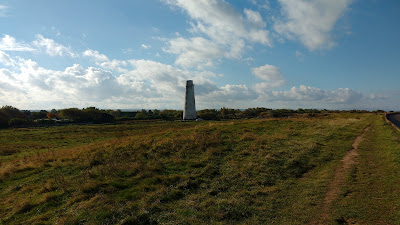 Why? The song tells it;

"Chronos called them then,
As his endeavour failed.
Theign of time who's thralls are tides,
He who spins back star-paths,
Or seems to.
Even those unalterable ones.

He called them from the ebbing tides of time,
The fretted sands of life upon this world when,
After mans decay,
As just before his rise,
Giants Ruled.

Titans of the end and of the worlds last breath.
Titans of the fall.
Titans mechanical, broken and cool,
Mighty-minded world-shapers made from mans last craft.
Abandoned thinkers in an empty world.
Kaos-children,
Knowing all,
The dark behind the setting sun.

They came,
And failed, and fell.
And Chronos fell, and falls.
And time began, begins, and is.

Clocks spring into life,
Seasons dance in regular time,
Winter follows summer out of fear,
(Never forgetting its hate,
always resenting its chains).
Sun circles earth,
Men age and die,
The dead stay in their place,
(For the most part),
Reality is being born;
Calmest of children,
Clearest of created things.” 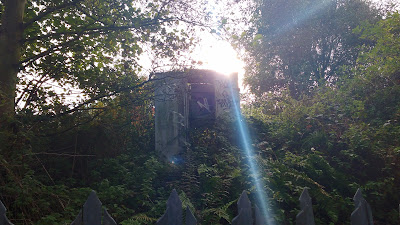 Chronos and his kin became the earth, the seas the sky and the stars, fire and flint, bone and bark, dreams and dust. But those Titans of the future could not die, for they had not been born. Paradox was banished from this world, order ruled. They must wait, wait and sleep. Wait till waking when time would allow them to be. Wait and dream of worlds unborn. Under the earth but not of it, sleeping just under the turf, oak roots tangled in their hair, bogs in their nostrils, rabbit warrens just beneath their finger-nails.

Sleeping and dreaming and turning just under the grass, their dreams escaping, staining the air, transforming the land, filling it with memories of millennia to be, dreams of industry, dreams of long decay, mechanical, indifferent and absolute. Long sorrows and the wash of dark forgotten wars, scars before the wound.

They lie tangled with each other like drugged men. Their entwined and sleeping limbs make the bedrock of the peninsula. It was there the powers dumped their somnolent forms, piling one upon another, hurling them into the sea between the Rood-Die and the Afon-Mor. Sleeping in Wir-Heal where the myrtle springs up from the bog, salmon nosing wisely in its root, the Ouzel, bird most knowing, in its branch. A peninsula bounded by the rivers of the gods, fronted by cold seas, a place where few would wish to go, and from which few return.

Yet men do go to Wir-Heal, for the minds of those Titans are labyrinths of gems and gold. And men know greed above all things.
Posted by pjamesstuart at 07:25