(Before we begin, I should state that everything I'm talking about takes place during the 'Golden Age' of Spacehawk, the first 9 or 10 issues. The later issues will be discussed in 'The Case of the Missing Tires'.)

Colour is the king comic this serves. More than that, it's Wolvertons right hand, as if colour itself were behind him as he drew, coiling in the air, reaching down to touch his pen.

Behind the artist stands a hierarchy of drives and desires, abilities and skills. Like a court of  competing lords, each generating and solving particular kinds of problem in particular ways. My best guess at Wolvertons court of art is this;

When any problem comes up, when any opportunity presents itself, when any question is asked, the prime and first answer is always a duel, or conversation, between colour and invention.

Can I invent something? Can I show it with colour?

HOW DOES COLOUR WORK IN SPACEHAWK

There are rules for the way that colour is used. They are simple and strong and probably the most important rules in the comic. They are the comics Constitution.

- Singular. No mixing, shading, feathering or any change within a colour block. The depth or shape of objects is never given with colour, only with line.

- Bound. It must be entirely bound by distinct, strong lines. No flowing of one colour into another, or of one shape into another.

- Primary. Any colour used should be as close the the strongest primaries as possible. Other, less distinct shades should only be used in special circumstances or when the primaries have already been used up.

- Opposed. No colour should be seen against itself. That is, no red against red, blue on blue etc. Colours should be counterpoised so that seeing them against each other produces the strongest possible visual signal.

HOW DOES FORM WORK IN SPACEHAWK

- Simple objects. Objects tend not to have much detail, instead they have other objects. A wall, for instance, tends not to have panelling, instead it has a vent, machine or mysterious flange.

- Distinct objects. Each object is entirely itself and separate from its environment. What this means is that when you look at almost anything in Spacehawk, you can imagine picking it up, detaching it from its context and carrying it away.

- Everything is an object. Guns and people and space ships are objects, but so is everything non-material. Outer space is an object, it's like a thick blanket of wavy lines. Energy is an object, its a sharp jagged spray locked into the page. The movement of rockets is a white pennant that follows them about like a flag.

- Shape defined by line and nothing else. Each object is usually its own colour. If it has depth, for instance, the curve of a bulkhead or the folds in a jumpsuit, it will be given by short, strong lines or by minimal crosshatching.

- Subheading, RIVETS. If the shape or curve of any made thing in the story can be defined by rivets, then it will be.

- Haptic. Things are depicted more how they feel than how they would look. 'Fluid' objects like clothes or alien flesh are like clay, or play-dough. Solid 'technological' objects are like smooth, hard, shiny plastic. There are no fine folds or delicate things.

- Subheading, Faces. All the alien faces look like they could be shaped out of clay. At one point, Spacehawk literally shapes himself an alien face out of a kind of clay. Alien faces should be massively over-expressive in the way that children’s drawings are. Big eyes, big mouth, big nose, big teeth. 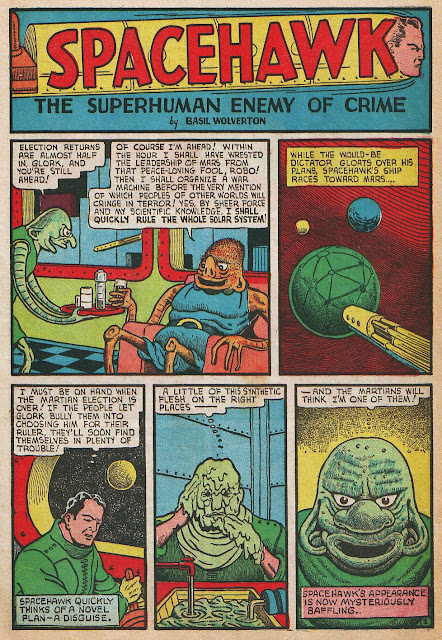 - Subheading, Technology. This might be partially because it’s from the early 40's and real life control systems are not yet highly complex, but in SH any technology, whatever it does, can be activated and very subtly controlled by manipulating a few very simple objects in a mysterious way. Turning a dial or wheel will usually do it. Either it’s a performed physical movement or its triggered by brain waves.

The combination of the boldest possible colour groups, distinctly separated and counterpoised, separated by strong distinct lines with minimal in-block additions or detailing, and the overwhelming simplicity of each individual object, creates what I call 'Spacehawk Stained-Glass'.

Spacehawk is so bright that if you wake up in the dark you don't need to turn on a light, just open the book. It glows. 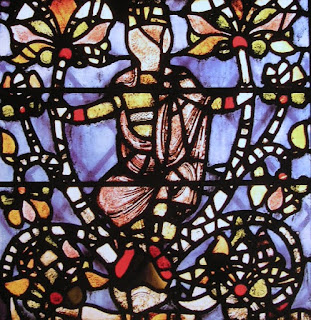 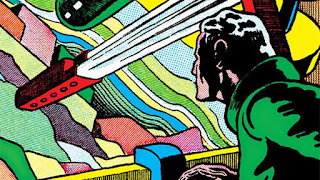 HOW DOES INVENTION WORK IN SPACEHAWK

- If can be alien, must be. Nothing can be any more familiar than it has to be for people to understand what it is. Its the alien version of a thing, or a new thing. Nothing is from the familiar, experiental world. There should be almost nothing in the comic that you could find in a normal home or on a normal street.

- Always increase, never return. Places, objects, ideas, relationships should always be created new and whole and returned to or reverenced again as little as possible. The world of Spacehawk, both the physical and social world, is expanding endlessly, much faster than Spacehawk can experience it.

HOW DOES STORYTELLING WORK IN SPACEHAWK

- Multiple channels, same message. If two or three different streams of information are being used, say an in-panel caption, a speech bubble and a shown action, all channels must be used to intensify the same message. They don't ironise, break apart or comment on each other. They all say the same thing in a chorus. When Spacehawk hits someone, the hit has no other meaning than the one shown. Caption - "SPACEHAWK LANDS A MIGHTY BLOW". Speech Bubble - "TAKE A NIGHT CAP MY FACIST FRIEND!"

- Emotion. Emotions are always pure and overwhelming, experienced one after another. No-one has more than one emotion in their heads at any one time

- Colour serves reality last. If the background to a talking head is one plain field of clour with no lines, then the colour depends more on the emotional signal of the panel and the general colour composition of the page than it does on any expression of 'real life'.

Anything can change its colour if it needs to, especially backgrounds, especially in the early stories

Same with the sky, it can be whatever colour it needs to be from moment to moment.

NEVER spend a page at the same scale of action.

- use the paint box. Try to get all the primary colours into a panel, if you can't get them all into one panel, get them into one page.

Wolverton works under powerful constraints. Sometimes constraints of choice, sometimes of material, like printing technology, sometimes of culture, many sci fi things haven’t been invented yet.

The tools he uses are the simplest and most direct. The world he creates is the largest, wildest, least familiar one he can envisage. It is the vast range and depth of things to be imagined and the extraordinarily small but powerful range of available techniques that produces INTENSITY.

His ambition and desire is continually overleaping his ability. The inner vision (nearly) outstrips the hand. The true hero is always 'becoming' and the true heroic story is also always becoming.

Mature artists doing things they know well can often produce very good works but its rare for them to have the feverish life inside them of artists with powerful imagination with  pushing against what they can do.

Intensity in Spacehawk is imagination pushing against ability with the force of a Rocket Blast!
Posted by pjamesstuart at 08:50