We Won a Thing!

Specifically, we won Indy Supplement of the Year! Which apparently is for this : This is a unique and very subjective Sub-Award. It goes to the designer who displayed the best support of their 2014 published game or supplement. This could be through the creation of forums or mailing lists about their game, their response times to questions about their games, the designer's use of marketing to get the word out about their game, the organization of the game's website, and of course support materials like free downloads, rules, starter kits, materials, adventures and supplements.

I'm not sure if we did much of that, but I remember answering some emails, so maybe that counts..

We, of course, means me and Scrap Princess 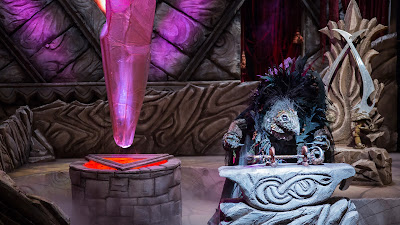 Who no doubt has her own speech to make..

About a year and a half ago Zzarchov Kowalski contacted me pretty much out of nowhere and asked if I would like to write an adventure for his NGR game. When he asked what artist I would prefer I said 'Scrap Princess' and he said that was handy because that's what he was thinking too.

Despite the fact that it took fucking ages to make and that it was actually statted for LotFP/BX because that's what I was familiar with, Zzarchov not only paid me for the adventure and for all the layout, proof reading and art, but also let Scrap and I keep it for ourselves, sell it and retain all the profits and rights.

If he hadn't done that it probably wouldn't exist and maybe a lot of the stuff that happened afterwards wouldn't have happened either.

So the Patrick Stuart award for Trew Knichthood goes to Zzarchov Kowalski.

DCO came out a little over a year ago. Since then about 595 people have bought it on RPG.NOW and maybe a few more have bought print copies on Lulu. I would be surprised if the total number goes over 1000 people, which is not bad for an ultra-niche product with no marketing budget and no advertising budget.

It's been a good month for DCO. First the Rammy for best writing, then a surprisingly good review from Bryce Lynch (I thought he would find it pretentious and hate it) and now two Indie RPG awards.

I'd like to thank all the small collection of weirdos that liked the book and who gave it so much support in the tiny microculture we all swim around in. We may be bacterium living in a drop hanging from the nose of gaming in general, but big things often have small beginnings...

There are three Patrick Stuarts on Wikipedia and, if I am to rule I must voyage to the Halls of Mandos to challenge and defeat them each in turn. Then when I finally stand over their blackened corpses the way will be opened for me to face my greatest nemesis

There can be only one.

I should take a moment to talk about what I am up to now..

Veins of the Earth - This is in its second proof-read. Jez Gordon is working on the layout. It's about 90,000 words so it will be big and it will take a while. Scrap has created the best art ever seen in an RPG book and if it doesn't win a 'Best Art' Ennie I will join Isis in protest for western culture will have lost any validity.

Maze of the Medusa - This once-cursed Space Hulk of  a project may have drifted into the orbit of  Imperial AgriWorld Baumann-Urbana. Terminators of the Void Dorks chapter have penetrated the initial layers. Remains of previous expeditions have been found. Reports are still coming in.

False Readings - This is an actual 'book' book that is half actual completed sword and sorcery stories and half fragments of weird writing projects from the last decade or so. It will also have to story of how Ghar  Zaghoun got that strand for his bow. As soon as this final tale is done I will hand it over to Paolo Greco who should bring out the whole thing through Lost Pages.

Broken Fire Regime - This 'sequel' or at lest companion to DCO is currently paused. As soon as the final False Readings story is done I will go back to working on it, expect it some time (hopefully) in early 2016. It will be bigger, stranger, more open and with quite a different mood. DCO was heavily influenced by the LotFP aesthetic and adventure style, BFR will probably move even further from that into strange new territory occupied only by itself.

Knights Of The Snail - This is a long-term probably-very-large actual book-book featuring twenty interlocking tales of the Knights of the Snail. To be illustrated by Matthew Adams. Whenever I am not working on BFR I will be doing this. Two of the twenty stories are done so far and both will be in the False Readings book.

My apologies for the low level of blogging recently, its going to continue like that, at least for a while. If I want to get anything done at all I need to narrow down projects so I am only working on one thing and just try to do that till its done.

The best way to find out you won something.. 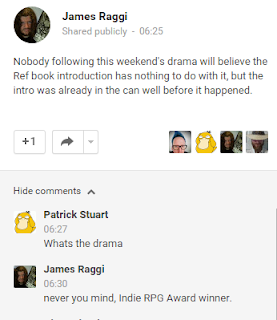