a city without a name


I wanted to imagine building a city for D&D.

No. Not true. I was fantasising about being asked to build a city for D&D. Someone important was saying ‘well you are a genius Patrick, Veins Of The Earth was a huge success, everyone is thinking, what are you going to do next?'

I was saying ‘well I could do the ultimate Drow sourcebook but to be honest if I did it I would want to go full out and not hold back anything and if I did that it would be mainly about slavey and way to dark and upsetting and trigger-warningy for mass production so I better not. Plus, thinking about all that dark shit for a long length of time would get me down. So instead I would like to do a signature city or place for one of the good guys. Like those 4th edition modules, but good. Like the module as you remember it through the haze of childhood fifteen years after you actually read it. With all the crap forgotten and the good stuff embroidered by the inventions of time. Then I thought of this picture- 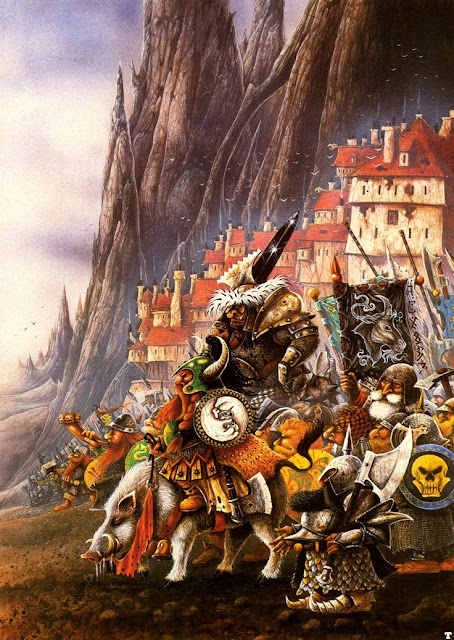 And I said DWARVES. But different.

Imagine you are coming to the painful end of a long life. You can feel your body decaying around you. You have Alzheimer’s, you can feel your memories and sense of self drifting away moment by moment. You are alone. You are afraid. You are living the last moments of your life in the direct presence of annihilating despair. A void of meaning. But, let loose from all calculations, at the end of every possible hope, instead of collapsing, or crying or silently breaking down, what if you were to rise up?  To surge. To throw yourself carelessly into deadly adventure? To coil every fading memory, every tenuous pale flame of selfhood and every dying ember of self-respect into a charged spring of action and then to hurl yourself madly and violently into the face of evil and madness for the cause of all mankind?

Imagine if instead of a person, that was describing a civilisation, and that civilisation was encoded in a single city. That is the city I would write.

I don’t know what it’s called.

It’s lying tilted and falling in the mouth of a volcano. A good third has already fallen in and bits and pieces are going all the time. The whole thing could just side away every second.

The volcano leads straight to hell and daemons spew out every night. 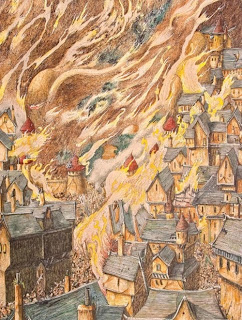 The kings of hell hate this city. It is the city of the Dwarves. The Dwarves were great and mighty in ages past. They were sombre and grim and dwarfish and sang long low songs, but they were hard as fucking nails, so instead of getting decedent and pervy, whenever their civilisation got bored, they would collectively find the evilest creatures and forces across all the cosmos and they would just fuck with them. Just to ruin evils day. That is what the dwarves did with their spare eons. Century over century over century of tracking down daemons and liches and diabolic dragons and creatures of the outer dark and just fucking with them, killing them, wrecking their plans, freeing their slaves, bringing down the dark towers, just for the pleasure of doing it. That’s how you run a culture.

So now the age of dwarves is done. Their civilisation is dying. The kings of hell have sworn to drag the last city of the Dwarves down into the fire. Who is going to stop them?

The City is a place where every night hell unleashes another apocalypse to destroy it, and every night the anarchist remnants of the Dwarven people (and anyone else who wants to turn up) fight them off, just to ensure another day goes past.

There would be big tables to decide what kind of apocalypse is happening tonight, they would all be utterly different. Yes, big red devils with wings, but also living creatures of despair, evil plots, strange magics, ghosts of evil dragons, fallen angel deathsongs, diabolic brass siege engines, never the same thing twice. Never the same kind of thing twice. 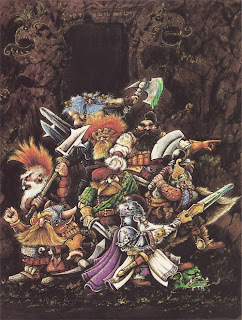 And because this is a place where you are guaranteed to come face to face with ultimate despair every night, only the coolest, craziest, bravest people go there. The kind of people who are either massively good, totally at the end of their tether, or just don’t give a fuck.

There is no real central authority. There might be a king but he is pretty busy foiling endless evil plots to worry too much about what you are up to, so it’s cool. It’s mainly Dwarves. Strange mad brave dwarves. They are old and weird with the knowledge of forgotten centuries and dead friends, or young and careless in the face of destruction. There are lots of other types of people there as well. All the people who couldn’t get along anywhere else because they were too real for the system. No-one is too fussed about normative conduct because you have probably signed your own death warrant by coming there. It’s generally assumed that you are going to spend your time doing something unspeakably heroic. Because if everyone in the city wasn’t doing that all the time then the city would be gone.

There are endless halls and catacombs and ancient libraries and museums and strange crypts. They are full of the knowledge and secrets and treasures of the Dwarves. Accumulated and guarded over millennia. The secrets are all about fighting evil. Every night demonic forces surge into the city and try to wipe out the collected memory of civilisation. Every night, teams of anarchist kamikaze librarians do battle to preserve the memory of the past so that future generations will know how to successfully fuck with evil too.

(There is also lots and lots of gold and treasure which needs to be rescued from hell.)

When the sun comes up and the city is still there, people throw a drunken dwarven party. There will be big random tables and rules for partying and what happens then.

In the day while living hero’s sleep, the ghosts of the heroic dead guard the city silently against invisible evils no-one else suspects. So even if you die in the city then that’s just the start of a bigger adventure for your ghost.

In the points between fighting evil, partying and sleeping, people try to run a (sort-of) normal city. They fix sewers, shop, deal with infrastructure. There are normal jobs but the people doing them are the best possible versions of the people doing them anywhere because everyone here is slightly mad and heroic.

And that is the city I would make. (art by John Blanche)