Cannibal aristocrats with souls and skins of ash. 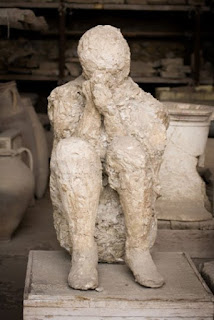 The first thing you notice is the absence of a crouch. They don't move like ghouls. Because, they're not ashamed of anything they've been or done. They walk with confident languorous steps. Imagine strolling through your home from room to room. It's Sunday. There's no one to observe. There's nothing to collect or move. Your hand brushes the wall fingertip light, reasonless. That touch is how they walk. As if they own the wilderness of stone.

Their faces are carved badly with rock-mitten hands. They've no idea. Mirrorless they carve and cut with knaps of flint and broken blades. Each hewing its own motionless grey face. Scraping ash-flakes in the shapes of eyes and mouths. Like a face drawn by a clumsy child. Eyeless, earless, noseless they carve on. A memory of a noble profile lost in endless blind migrations through the heat-hammered dark. A fools attempt at grace, a spastic refinement. This is what they think they looked like once.

The ghouls have other senses now. Unknown to living things. They hunt well and need no light to do it. But touch, tactility, remains. The one remaining aspect of mankind. They feel like people do. But locked and grating through endlessly flaking armour of rock.

The mouths still work. Wet and red inside, half open like a panting dog. 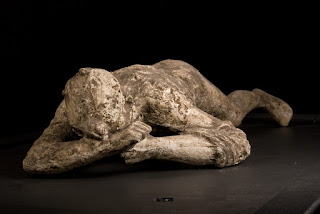 If you keep throwing peasants to an angry volcano deity, eventually they get upset. This puts you in a jam. A wrathful mob around the mountains base, a raging god of fire above. It's only going to end one of two ways and both of those ways involve people burning to death. Either the committee for the revolution sends you godwards face to face, or he pops out the hill to see what’s wrong.

The culture that produces the ghouls is gone. Imagine Rome, or Babylon, the English in India, the Caliphs in Cadiz. Somewhere with things ripe enough to burst.

Wankers essentially. The mountain took them all. A noble-thronged redoubt consumed by ash. The people were eaten.

It might be that the things that ate them stole. The memories that they have may not be theirs. Elemental carrionites* feasting ashy meat of a decadent race. Waking up the flesh inside. Riding on the memories that they found. Dancing distant chimes of murder and control.

But maybe it is them, the original bastards, burnt and preserved in the breath of the volcano. Waking up a long time late, hungry and malformed, immune to heat. They peregrinate inverted down below. Strolling upside-down beneath the crust. Immune to magma. Buoyant enough the treat the continental root as floor. Strolling an waiting for an opening. They swim-crawl up and beach the lava-tubes. Off and out, hunting for meat.

They are utterly refined, at least with the fractured memory of refinement. Manners always. They can be spoken to and negotiated with. But they do not work. Arrangements can be made. They are not paid. They do not trade. A tacit trust can be arranged. The treasures they're no paid with are of stone. Only sculptures work, the craft of perfect hands and inspired minds. If these are provided at regular intervals they ghouls can be persuaded to stay in one place and pursue regular prey.

The lair of the ghouls is filthy. Blood and old bone carpets the floor. Silk hangs in rotting ruins. Occasional treasures lie bent on the floor. The sculptures they demand are scratched. The ash-mitten hands run up and down the perfect marble faces till they dull. Pressing and searching for a tactile memory long since lost.

Anyone entering this room and seeing how they live will be assaulted and killed, employer or no. There is something they're ashamed of after all.

*possibly some kind of voidling?

Roman Nicolaus Fyodorovich von Ungern-Sternberg, who claimed descent from Attilla the Hun and the Medieval Teutonic Knights who settled in the Baltics, was a seasoned fighter of thirty at the time of the Revolution. Like Budyonny he had fought with Cossack regiments and had been decorated with the George Cross during the First World War. Fascinated by the mongols and their landscape, he went east to Baikal after the Tsar's abdication and adopted lamaistic Buddhism and the practises of the occult. Across the landscape of the failed empire new ethnically based policies were being imagined. The Buryat intelligentsia were taken with the idea of a pan-Mongol kingdom.

In late 1918, after Trotsky's Red Army had drawn back, an conference of Buryat-Mongols was held in Verkhneudinsk, financed by the Japanese with a view to the creation of a Greater Mongolia, independent of both Russia and China. Baron Ungern, who dreamt of recreating the Mongolian Empire of Genghis Khan, recruited a volunteer army of many nationalities: Buryats, Mongols, Cossack remnants of the fallen White armies, Tartatrs, Japanese and Chinese. Qualifications for recruitment were a fur coat, a horse and saddle, ichigi Mongol-Buryat shoes and a papakha hat. His troops were paid through Cossack atamans.

The company of men immediately around Ungern was reputedly made up of cocaine addicts and alcoholics. The unlimited use of narcotics and vodka fuelled his armies spectacular atrocities, rapes and the foulest imaginable mutilations, directed systematically, and with particular cruelty, against Jews, Bolsheviks, and any person with a physical defect. (Believing in reincarnation, the baron claimed to be doing such people a favour with his slaughter.) Travelling with his personal Buddhist soothsayers and seventy bodyguards sent by the Dalai Lama, Ungern lead an army of six thousand men into Mongolia in the Autumn of 1920. 'The tribes of Genghis Khan's successors are awakened,' he said, 'nobody shall extinguish the fire in the hearts of the Mongols. In Asia there shall be a great state from the Pacific to the Indian Ocean to the banks of the Volga.. It will be a victory of the Spirit.' Promising that he would make an avenue of gallows from Mongolia to Moscow, Ungern declared himself Emperor of Russia.

The Baron's adventure came apart in may of the following year, when his army was routed by the Bolsheviks near Kyakhta-Troitskosavsk, and he was found by a Red Army patrol, alone and wounded, writhing in the dust as ants crawled over his body, screaming, 'I am Baron Ungern-Sernberg.'